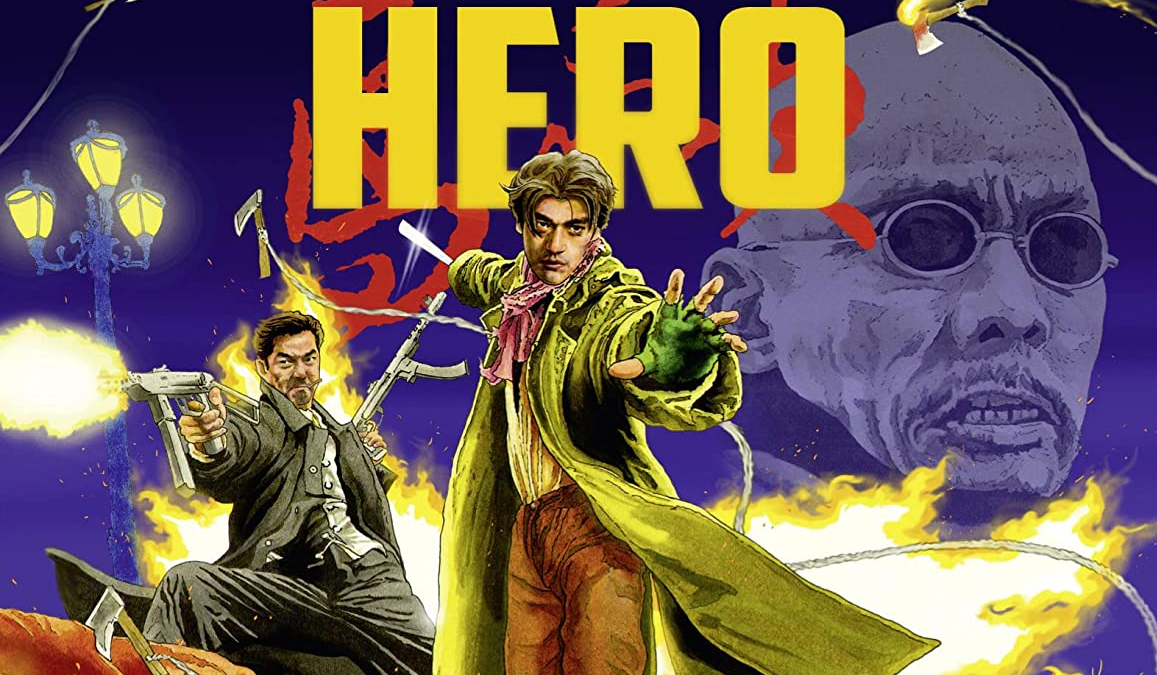 The Shaw Bros Classic Boxer from Shantung is remade by Corey Yuen as Hero starring Takeshi Kaneshiro.  88 Films has done it again giving us a great Shaw Bros package on Blu-ray.

Later Era Shaw Brothers are still Shaw Brothers.  Add the luster and talent of Corey Yuen at the top of his game.  Cast Takeshi Kaneshiro and Yuen Biao as the leads. Hero is underrated Shaw Brothers is in need of reconsideration.

Ma Wing-jing (Takeshi Kaneshiro) and Ma Tai-cheung (Yuen Wah) have big plans to make it big in Shanghai in the early 1900s.  Their fortune is being coolies (essentially manual day laborers).  It’s only when Ma Wing-jing is challenged by crime boss Tam Sei’s (Yuen Biao) their fortune changes.  Ma Wing-jing is brought into Boss Tam’s organization.  Though Ma Wing-jing has other plans and begins his ascent to power as a Boss of his own.  It’s only a matter of time before his power grab is stopped by the other Bosses.  Left for dead, his organization in shambles, Ma Wing-jing must heal and join forces with the Boss he turned his back on – Tam – to exact vengeance.

At 97-minutes the Corey Yuen directed film moves fast and furiously to its climactic finale.  There isn’t any fat on the film which is to its benefit.  There is a stylistic mash-up mixtape quality in the film.  From gun battles, to wuxia, to chases, to traditional fights are all present with the glee of a child on a sugar high.  That goes for the type of movie the film is.  One minute it’s a musical to the next it’s a gangster film to the next it’s a longing romance to the next it’s a buddy action film.  It does help that Kaneshiro is one of the coolest on-screen personas of the era.  Here he’s all sorts of cool.  Whether he’s kicking ass, playing the bongos, dancing, or smoking Kaneshiro is the very definition of cool.

Hero isn’t a great movie but it’s a highly entertaining and expertly made one.  As long as one goes with the flow with the stylistic and storytelling gear shifts… you won’t find a film as eager to please in HK Action cinema as Hero.

The HD Transfer from the Original Negative is just an outright gorgeous transfer.  This is one of the Majestic Film transfers, so the original coloring and titles have been replaced by newer cleaner ones.  The handsome sharp image is as clean and flawless as the day it was produced. Many will critique the grading on the transfers but what we get in return and the fidelity of the image is just too good in a way that any of the Shaw Bros Studio films have looked.  The handsome clean sharp image is free of any blemishes, scratches, or deficits.  Having seen this film initially back in 1998 on a bootleg DVD, I can attest this is a HUGE upgrade by any standards.

Audio Commentary by Kung Fu Experts Mike Leeder and Arne Venema jump right into the commentary track beginning with being excited back in 1997 in the theater in HK an actual Shaw Brothers film.  Some of the details include a discussion of China/HK that the film is set under, the accuracy of the train scenes and the overfilled nature of them, the various filmed version of the characters, a discussion of Takeshi Kaneshiro the lead of the film, a discussion of Yuen Biao, the limited nature of the budget, Corey Yuen’s direction and style, a great side discussion of Pop Star and Military Service in Taiwanese and Kaneshiro, a strange homage to The Mambo Kings, the influence of Anime, Spielberg, and others on the film, a discussion Yuen Tak and his history and mentoring some of the great directors of 1980s and 1990s HK cinema, the Yuen Tak discussion includes a hilarious fact about his stunt doubling a HUGE American Pop-Star (which you’ll have to listen to understand), the various labels of ghost directors and co-directors and some great examples of this in Yuen’s career and some other directors, the interesting career of Valerie Chow, a great story about the movie Australia, the lack of animal safety in HK films and a strange credit in this, the film’s rating and its violence, a great anecdote about guns and China and permits, the smoking in the film, the work of cinematographer Tom Lau – including a very troubling career a director, a side conversation about some very extreme sub-genre and sub-culture, the reason why fireworks are outlawed in China and HK, the deserts in China and shooting films there, some cultural discussions of Chinese Afterlife, a discussion of the finale, the lost forgotten Kaneshiro’s final HK movie, and much more.  Leeder and Venema bring us another great commentary track that’s both informative and highly entertaining.

Alternate Shots From the Taiwanese Version (0:21) – an extra piece of gore that has been removed from the non-Taiwanese version.  The excerpt comes from what looks like a VHS version of the film.

English Trailer (3:58) – a hilariously great voiceover is added and a few extras moments in this “English” version of the trailer.

Hero is a delightfully entertaining film.  88 Films has done a great job of bringing this to Blu-Ray.  Highly recommended!!!

88 Film’s Blu-Ray edition of Hero is out now