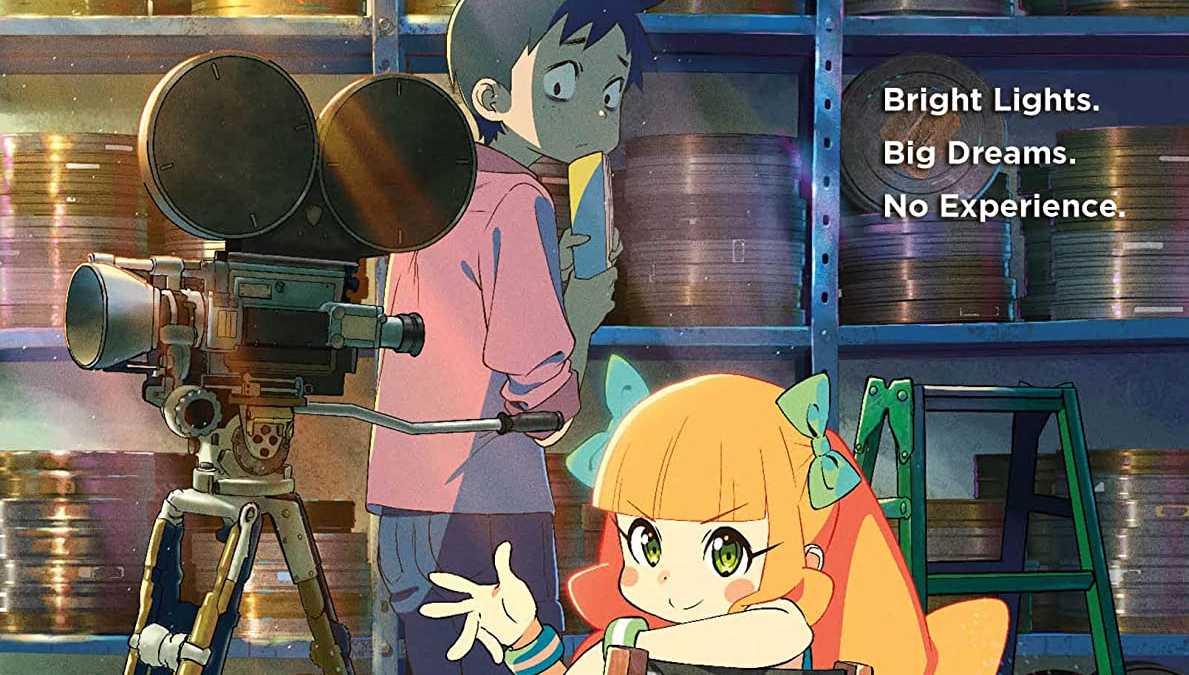 The fine folks at Shout Factory and GKIDS bring another winning animated feature to Blu-Ray with director Takayuki Hirao’s adaptation of the Manga Pompo: The Cinephile.

Writer/Director Takayuki Hirao creates a wonderful love letter for cinema and the art of making films in his adaptation of the popular Manga Pompo: The Cinephile.  The animated film is able to do what live-action can rarely do; brings the wonder and awe of both behind the screen and in front of it.

Pompo is one of the biggest producers of Epic B-Movie Blockbusters.  There’s a formula to her work and she admits this as much.  Much to the chagrin of her assistant Gene.  Gene finds her work passé and commercial dribble.  He dreams of making a statement, making a classic film (don’t we all Gene).  When Pompo gives him a chance to do just that… Gene finds his anxiety and passion mixed together.  The director also begins to realize that Pompo is as much a genius as anyone in the industry.

This is the rare film like Singin’ in the Rain and Cinema Paradiso (a film that’s name dropped in this film) that has a true love affair with the magic of cinema.  Pompo: The Cinephile approaches that love with a modern – and very anime – twist in both the story it’s telling and the visual style it uses.  Director Hirao working with his team of talented animators, layout designers, and compositors has created a film that like many anime puts its emotions and passions with an external visual punctuation.  These punctuations perfectly showcase ideals and challenges of everyday film productions – like cutting a trailer – with the sort of adroit zeal that few films (live action or animation) can muster.

Pompo: The Cinephile by its end gives us a warm sense of happiness in its much-deserved happy end.  That is the biggest magic trick of all.  Giving us a happy ending that feels earned and never maudlin or overly sentimental.

Shout Factory has provided a perfect transfer for the film.  The razor-sharp image is flawlessly transferred to Blu-Ray.

The Audio Commentary by The Director And Crew opens with Director Hirao, Unit director Imura, and Editor Imai introducing themselves and beginning with the opening scene and how it was a homage to Martin Scorsese and Goodfellas (which isn’t the only homage that the group points out).  Some of the details include why they developed the opening title musical sequence in they did, a discussion of what an editor in an animation film does, the importance of character movement, the work of the sound department, and the sound design of the film being developed, the films within films and how they were accomplished, the creation of Gene’s Notebooks, the creation of scenes where Gene is editing, the detailed work to ensure that various ephemera was correct and looked accurate, and much more.  The trio does a marvelous job of recounting the production and just how difficult a job it was to get the specific vision on screen.  Japanese with English Subtitles.

Feature-length Storyboards (93:43) – NOTE: this version does NOT include a voice track so everything will play silently.  I am unsure if this was intentional or an issue with the disc.

That being said this is a truly wonderful Storyboard version of the film.  Part of watching any feature like this is your interest in how animation is created in its various forms.  This Storyboard version has everything from pencil roughs to completed composites to completed shots from the film.  Anyone that interest in making animation or just how these movies are developed will want to watch.

Character Design Gallery (3:18) – this gallery of 39 images allows you to pause and use the Next Chapter stop button on your remote to navigate and investigate the various images and details from the concept drawing.

GKIDS has done it again and given us a great anime.  Highest Possible Recommendations!!!

Shout Factory’s Blu-Ray Edition of Pompo: The Cinephile is out now