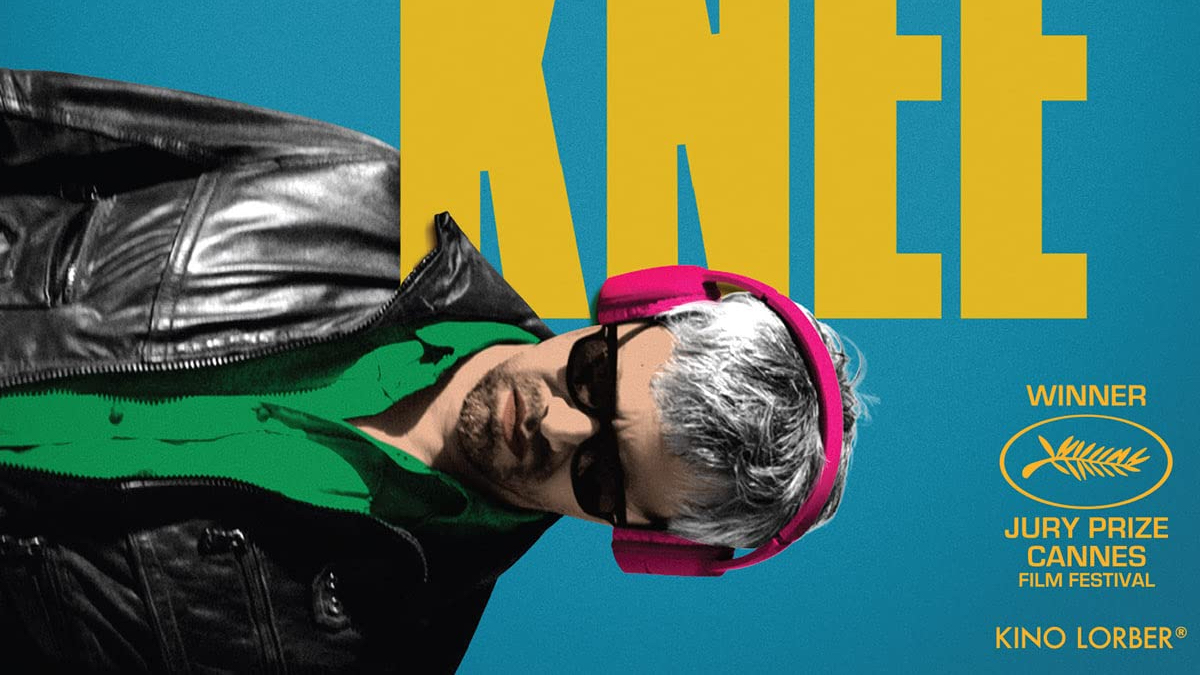 Ahed’s Knee shows a filmmaker in turmoil as he screens his newest film — it’s one of the best films of 2022.  New to Blu-Ray from Kino Lorber.

Let’s be honest.  Sometimes a complicated unlikable bastard of a character is more watchable thanks to some Dudley Do-Right cardboard cutout.  Writer/Director Nadav Lapid creates a searing portrait of a complex artist as Y, the protagonist of Ahed’s Knee, attempts to sort out his place in a changing political and artistic landscape proving there isn’t a separation between either.

What begins as a Screening and Q&A of his latest film quickly turns into a crisis of artistic faith for Y (Avshalom Pollak) as he’s confronted with being essentially censored by the current Israeli Government on what he can and cannot talk about.  If he wants to get paid.  This sets off a series of encounters with Yahalom (Nur Fibak) the face of the government.  The woman attempts to indulge the enfant terrible who will have none of it.

As Y confronts Yahalom with rage, anger, and abuse Y cannot stop himself from pushing and pushing and confronting.  Going from deep into his past in the Army to presently with his mother who is his co-screenwriter, Y leaves nothing in his life unturned.  Digging up the dregs of his life and his soul.

Ahed’s Knee is not meant to be a story of niceties and fun.  Y is truly an agent of chaos unable to process where his government and he had taken himself.  As Y stirs the pot over this 24-hour period – he stirs more than his own self ends.  He erupts a hornet’s nest of furor directed at everyone including himself.  Y is both victim and perpetrator of his own making as much as the government and country he resides in.  Unable to deal with any of the issues he is dealing with and angry at everything, including himself.

This is all captured in the desert of Israel with dunes, shale, sand, and heat to keep Y company.  Lapid and his cinematographer Shai Goldman create visual splendor that feels like a calm sea before a storm.  Lapid understands that the visual and audio are as much a factor in this type of endeavor as it is in a giant spectacle film.  The way that both are approached with character and specifically Y’s mental landscape is one of the best in recent memory.  There is an unadorned way that Lapid adroitly tackles the buildup before Y erupts which creates a subtle nervy tension that puts one ill at ease with the entire situation.

At its end, Ahed’s Knee shows that art and politics, and personal all collude in the most complex and messy of tangled ways.  No matter what one does, we are all at the mercy of the state of the Union we reside.  A heady and prescient message for our modern times.

Kino Lorber’s been provided a spectacular transfer of this digitally shot film.  The image is without any defects or imperfections.

Film Comment Live! – Nadav Lapid on Ahed’s Knee (75:29) – joined by Iranian Film Scholar and producer Jamsheed Akrami is a deep dive into not just how Ahed’s Knee came about but his other films that came before this.  Some of the details include discussions of Synonyms his earlier film and how Ahed’s Knee was a reaction to the reception of the film, his relationship with Israel and how it is imbued into his work, the financing including how much did the Ministry of Culture provided to the budget, the way that censorship works outside of Israel and how it compares elsewhere, the differences between the US remake and the original of The Kindergarten Teacher that prompts a discussion of National cinema, censorship in Iran in both present and past, how Iranian filmmakers have to navigate State Controlled filmmaking – a really great explanation and contextual discussion of current and past filmmakers,  the lack of Muslim or Palestinian characters in Lapid’s films, and much more.  In place of a commentary track, this 75-minute Q&A is a fantastic compliment to the topics and themes of Ahed’s Knee for those even with an in-depth knowledge of the subjects will find this of interest and a vital special feature.  In English, without Subtitles.

Ahed’s Knee is a truly great piece of personal/political filmmaking.  One of the year’s best.  Highest possible recommendations!!!