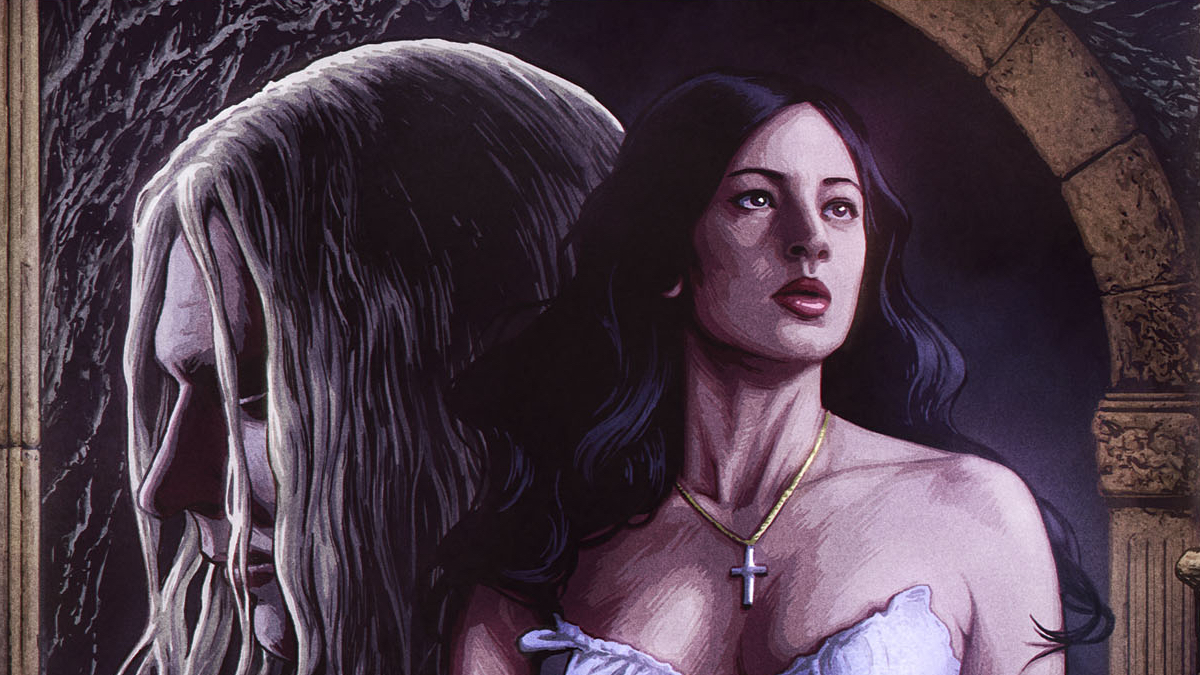 Dario Argento’s The Phantom of the Opera is a very different take on the doomed romantic horror tale.  Scorpion Releasing has filled its Blu-ray with special features.

1988 was the height of “Phantom fever”.  Andrew Llyod Webber’s musical adaptation starring Michael Crawford and Sara Brightman had hit Broadway fresh from its two-year stint at the West End in London.  A Dario Argento-directed version of the tale should have been at the least a mild success.  Though Argento’s The Phantom of the Opera starring Julian Sands and Asia Argento is visually arresting but dramatically inert.

Opening with a scene that inspired Burton and Batman Returns a child is thrown into the Seine and thus into the bowels of Paris.  The child is saved by the rats of the underground sewer system.  This child grows to be the Phantom (Sands) an agent of chaos of sorts dispatching his own brand of justice against various trespasses.  He finds an unwilling love in Christine (Argento) unrivaled in beauty and voice.  Thus, being their toxic and obsessive relationship that can only end one way.

Director Argento makes a film that though sumptuously mounted and scored by the legend Ennio Morricone, no less feels like four steps away from soft-core late-night Cinemax fodder.  Adding to the layer of creep is Argento directing his own daughter in sex scenes.  Everything about this production of The Phantom of the Opera seems slightly askew. As though it was only a few degrees from something truly special.

There are moments of true genius.  Argento’s use of the rats as the Phantom’s minions results in some truly creepy effective set pieces.  Even something as outrageous and silly as the rat-catching vehicle a character creates is surprisingly effective.

The biggest issue lies in the chemistry between Sands and Argento.  There is none is part of the issue so the back-and-forth between the two feels performative in the worst sense of the word.  This can be ignored for the first two-thirds of the film.  In the final third where it matters, where Christine’s mistakes and the Phantom’s murderous jealousy create a whirlwind of tragedy, is where everything falls flat.

The Phantom of the Opera is more frustrating than outright failure. Albeit a fascinated frustration.

Scorpion Releasing’s transfer is beautiful.  They’ve treated The Phantom of the Opera with the utmost respect and care.  Far more than in previous versions.  The photography by Ronnie Taylor is lush with a golden hue that is accurately represented here.  The handsome sharp transfer’s highlight is its contrast levels as the darkly shot movie.

The newly recorded audio commentary by Film Historians Troy Howarth and Nathaniel Thompson begins with the duo discussing by making sure that we understand many of even Argento’s most ardent fans find this to be his “great folly” though both admit to having a lot of love for the feature.  Some of the details include how a poll in a film magazine found that fans of the director wanted him tackle Phantom of the Opera, the collaboration of screenwriter, the various versions of Phantom, the relationship between Dario and Asia and the nudity and sex and relationship as actor and director, Asia Argento’s personal and professional life and her relationship with the Italian press, Argento first choice was John Malkovich, other rumored choices for the Phantom before casting Julian Sands, the original concept for the Phantom which was much more horrific, a side discussion about Wax Mask – the film that was almost director Lucio Fulci film that was to be produced by Argento, the fumbled release of the film theatrically, the terrible previous home video editions, the relationship between Morricone and Argento and their eventual falling out, the work of Julian Sands as the Phantom, the casting and work of Andrea Di Stefano as Raoul, the inspirations of the rat catching machine, the fallout from the failure of this film, the terrible working conditions during the production in Budapest Hungary, the increase of sex scenes in Argento’s later films, the various language tracks that were produced for this film and how are done in Italy, the various supporting players and how it was cast, the set pieces in the film, and much more. You can’t go wrong with Howarth and Thompson discussing any genre film but especially when it’s horror AND Argento.  The commentary is fun, entertaining, and informative as the duo’s many other commentary tracks are.

Behind the Red Curtain (18:07)– is an interview with Writer/Director Dario Argento.  The writer/director starts with his childhood love of the Claude Raines version of The Phantom of the Opera.  Some of the other details include the development of the script with screenwriter Gérard Brach, where the ideas of rats came about, his original – much more expensive – vision of the film, the length of time it took to develop the film, the eventual casting of Asia as Christine, the differences in the adaptation of Leroux novel, the casting of Julian Sands and his original vision for the character, and much more.  Italian with English subtitles.

In the Phantom Cave (18:13) – is an interview with Set Designer Antonello Geleng.  The set designer begins with how he started to work with Argento on the Argento-produced The Church and The Sect and how that lead to working with the writer/director on The Stendhal Syndrome as his production designer.  Some of the other details include the various stage and locations they used throughout Italy and Hungary, the difficulty working in Hungary because of language barriers, working in a real opera house and the difficulty dressing for such a large set, and much more. There’s some great production art throughout the interview.  Italian with English Subtitles.

Welcome to the Opera (18:07) – is an interview with Producer Giuseppe Colombo begins with how the producer – who was working at Cannon Films at the time – met Argento and began their relationship that eventually led to him producing The Stendhal Syndrome.  Some of the other details include how long they collaborated, how a remake of Rififi – which didn’t happen – led to their Phantom remake, a funny anecdote about Argento and Freud, and a wild bit of what-if casting (you’ll have to see the interview but trust me it would have been crazy), the possible casting of Julie Delpy, other possible castings of the various roles, the difficulty during the entire production, the release of the film, and much more.  Italian with English Subtitles.

The Phantom of the Opera may be considered lesser Argento but by no means should be missed by a new or old Argento fan.  Scorpion has put together a solid package.  Recommended.