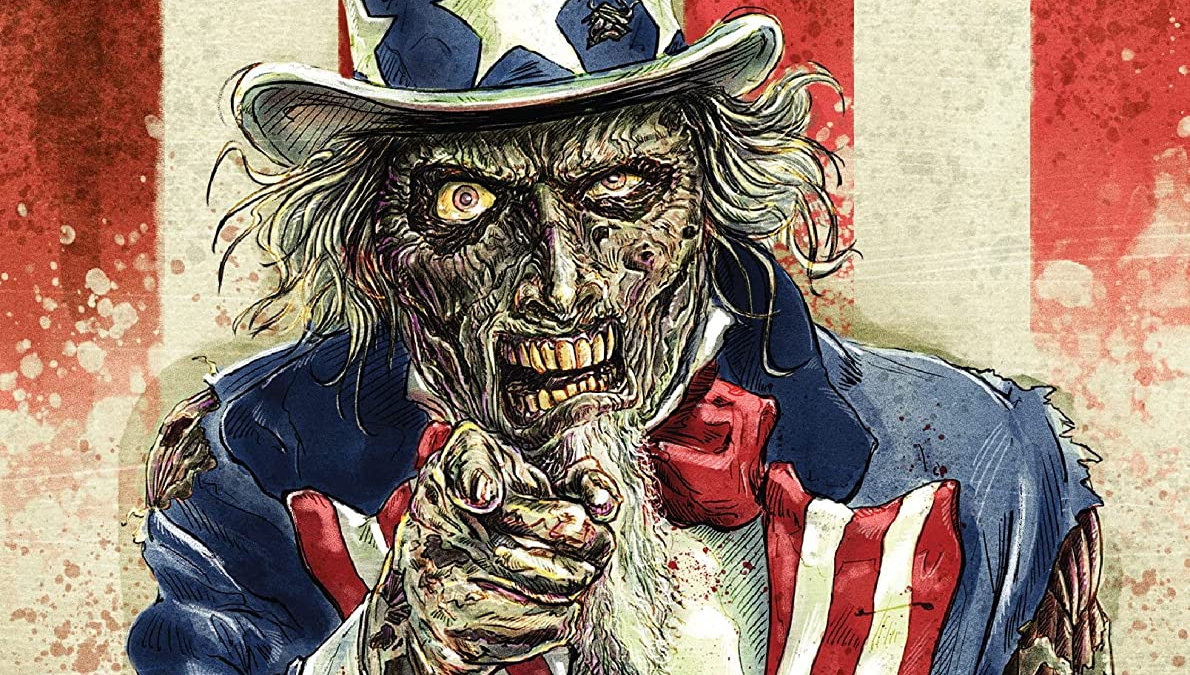 At the height of the slasher craze in the 1980s, there was all manner of the subgenre that were set during a specific Holiday.  It took two decades and genre legends William Lustig and Larry Cohen to create one centered around the 4th of July and Uncle Sam is the result.

Master Sargent Sam Harper (David Fralick) dies in a friendly fire incident during the Kuwait War.  This devastates his young nephew, Jody (Christopher Ogden).  Many find this news with little apathy or sympathy.  Jody finds this reprehensible and wishes that they would all pay for their trespasses as non-patriots.  Little does Jody know that his uncle Sam, with that wish to kill all those that are not true patriots, would rise from the grave to kill during the most patriotic of all weekends, the 4th of July.

Uncle Sam is not your typical slasher film.  It doesn’t feature teens running around having sex and being murdered for their lustful trespasses. No, the script and film find this as a critique of what people consider patriotism and what people will forgive and forget.  The script by Cohen is flexible enough with its themes and views that many of the topics we’re talking about currently can be applied to the film.

One thing that the film does lack is the type of iconic set pieces that Lustig and Cohen’s previous effort Maniac Cophas and then some.  There is a cleverness to the kills but those looking for top-tier set pieces should look elsewhere.  There are some truly wicked moments like when one of the town bullies gets his comeuppance during a potato sack race, yes… a potato sack race.

Regardless of the lack of truly great kills and set pieces the film’s critique is sharper than ever.  That alone merits a reassessment of Uncle Sam.  If that doesn’t convince you then the fact that they dispatch someone with a canon should be enough.  Bonus points for getting William Smith – who has a cameo in the film – reading a poem he wrote that is much more fitting than any music could be.

Blue Underground continues to impress with their film like 4K UHD presentations.  The Dolby Vision Encoded transfer is positively glowing.  The film mostly shot at night shows off the dynamic range of the color reproduction and contrast levels.  The detail that can be seen is outright amazing.  Blue Underground vitally understands that 4K is never about how sharp the image is but rather how much detail that is now available.  Uncle Sam, I can guarantee you has never looked better in both theatrical or home video exhibitions.

The first archival Audio Commentary recorded in 2004 featuring Director William Lustig, Writer Larry Cohen and Producer George G. Braunstein is a delight.  You know it’s a fun track when it begins with Lustig imitating Gollum. Some of the details include how and where they shot the opening scene, the casting of William Smith, the costly nature of the opening title sequence, how Cohen developed the script, the work of Bo Hopkins, shooting in Laverne California, the casting of Issac Hayes and Lustig’s original choice, the work of Timothy Bottoms, the casting Christopher Ogden, the importance of getting a great casting director, shooting the film anamorphic as opposed to shooting it flat, the changing of how financing had already started at the time, the way that studios were pricing out independent producers, Lustig’s regrets regarding pace, the editing by Bob Murowski, editing for the first time via Advid, the slower nature of the film and its build up, the way they casted the young woman who appears nude while Uncle Sam is on stilts, where the film some of the insert shots – hint: it was someone’s backyard, how Lustig was inspired by Val Lewton films, why films at the time needed to be 90+ minutes for distributors and buyers, the casting of Robert Forster and his personal relationship with both Cohen and Lustig, a few interesting anecdotes about the sack race, how the city of Laverne kicked the production out and why, and much more. Those that have listened to these collaborators and friends on any other commentary will know they deliver entertaining and informative tracks.

The second archival Audio Commentary also recorded in 2004 featuring Director William Lustig and Star Isaac Hayes begins with an introduction by Hayes to the film and Lustig – very humorously.  Some of the details include why he casts some of the people in his films, the inspiration that Lustig took from Close Encounters of the Third Kind, his initial reaction to the script of Uncle Sam, and both their thoughts on the town of Laverne where they shot – some truly geeky and hilarious, some of the backstory behind Hayes character and working together, the problem with casting similar looking female actors that Lustig regrated, how they shot the film with the restrictions to child acting, the casting of Hayes, and much more.  Hayes and Lustig have great chemistry and are both good-humored about the entire film.  There is a lot of overlap from the first commentary track but the two men are so affable and so entertaining to listen to you really do not mind.

Fire Stunts (9:48) – is a featurette consisting of b-roll footage with Audio Commentary by Stunt Coordinator Spiro Razatos.  Razatos, known by anyone that loves Lustig and have listened to the director’s other commentaries, guides us through the fire stunts and explosions that make up the finale of the film.  The stunt coordinator gives us some great details on how they achieved some of the great stunts in the film.

Deleted Scene (0:53) – a small scene that explains why it was a closed casket.

Gag Reel (0:40) – quick gag reel that’s made it to look like something very wrong happened.  That is to say that it’s completely Lustig-style humor.

Theatrical Trailer (1:34) – The Red Band Trailer for the film.

Poster & Still Gallery – the 53-images that consist of posters, production stills, home video cover art, behind-the-scenes photos, and even newspaper clippings discussing what eventually got them kicked out of Laverne California.  The gallery will run automatically, or you can navigate it by using your Next and Back Chapter Stops buttons on your remote.

Uncle Sam is definitely an unrated gem that deserves to be given a reassessment, especially for fans of Lustig and Cohen.  The UHD disc’s transfer is flawless.  High Recommendations!!!