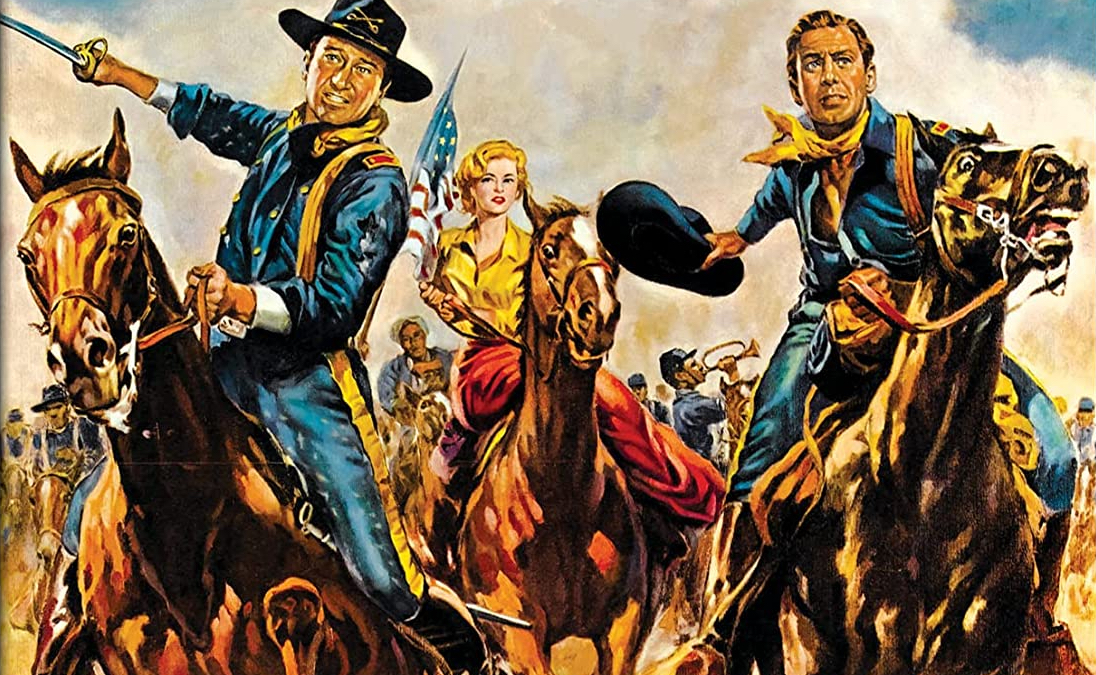 John Wayne and William Holden fight it out before fighting the enemy in John Ford’s The Horse Soldiers.  New to Blu-ray from Kino Lorber.

Based on the Harold Sinclair novel of the same name John Ford’s war film is high on adventure and character.  A combination that with a cast led by Wayne and Holden is a combustible one.

No-nonsense Union Colonel John Marlowe (Wayne) has been tasked to take his regiment of cavalry behind enemy lines to strike at a railroad supply depot that could – in real life it did – turn the tide of the war.  Not only tasked with this herculean effort, but the Colonel also takes on a new field surgeon in the form of Major Henry Kendall (Holden).  The men fight at every turn as they go on this mission.  Will the men finally sort their differences out by the time they reach their destination?

Ford’s rockling war film has a little bit of everything humor, romance, ethical quandaries, drama, and tragedy.  At The Horse Soldiers core is the relationship between Marlowe and Kendall.  The most adroit aspect of the film is the casting of Wayne and Holden.  The actors are the polar opposites of styles and film personas.  Wayne gruff and ruff on the ready the constant portrayal of law or military ideal.  Holden refined and charming, the romantic ideal even in his war films. Playing these two legends and their accepted onscreen personas against one another makes for some of the best interpersonal wartime drama of the era.

That is the bulk of the film’s dramatic throughline. The script adapted by John Lee Mahin and Martin Rackin understands that we’ve seen this type of film before.  The Men on a Mission subgenre is only as good as its characters and personal relationships.  The Horse Soldiers under director Ford’s guidance understands this and builds its characters – and by extension its cast – with some of the best archetypes and not stereotypes.  With Ford regulars like Judson Pratt, OZ Whitehead, Hank Worden, Walter Reed, Strother Martin, and Bing Russell in the cast and the director allowing time to build characters elevates this from just standard issue to something with more weight to it.

The Horse Soldiers is so much about the relationships between the soldiers – specifically Marlowe and Kendall – once their differences are resolved the film is at its end.  There is no need for the revelry of the charge into the final battle.  Ford understands we’ve seen this countless times before.  We and The Horse Soldiers have gotten to their true destination.

The Brand New 4K Master provided to Kino Lorber is a delight at every turn.  The color reproduction and contrast levels on this sharp handsome image are the standouts.  The film shot on Deluxe Color (Technicolor’s rival) is accurately represented here with a healthy sheen of grain giving it a look of a beautifully preserved or struck 35mm Archival Print.

The all-new audio commentary by Film Historian Joseph McBride, the Author of Searching for John Ford is a thorough account of the production with a truly tragic incident at the center of it.  McBride does a wonderful job of giving us a deeply researched informative track as he literally wrote the book on Ford.  A true companion to the film and essential listening especially if you liked the film.

The Horse Soldiers will delight any fan of war films or westerns.  Recommended!!!