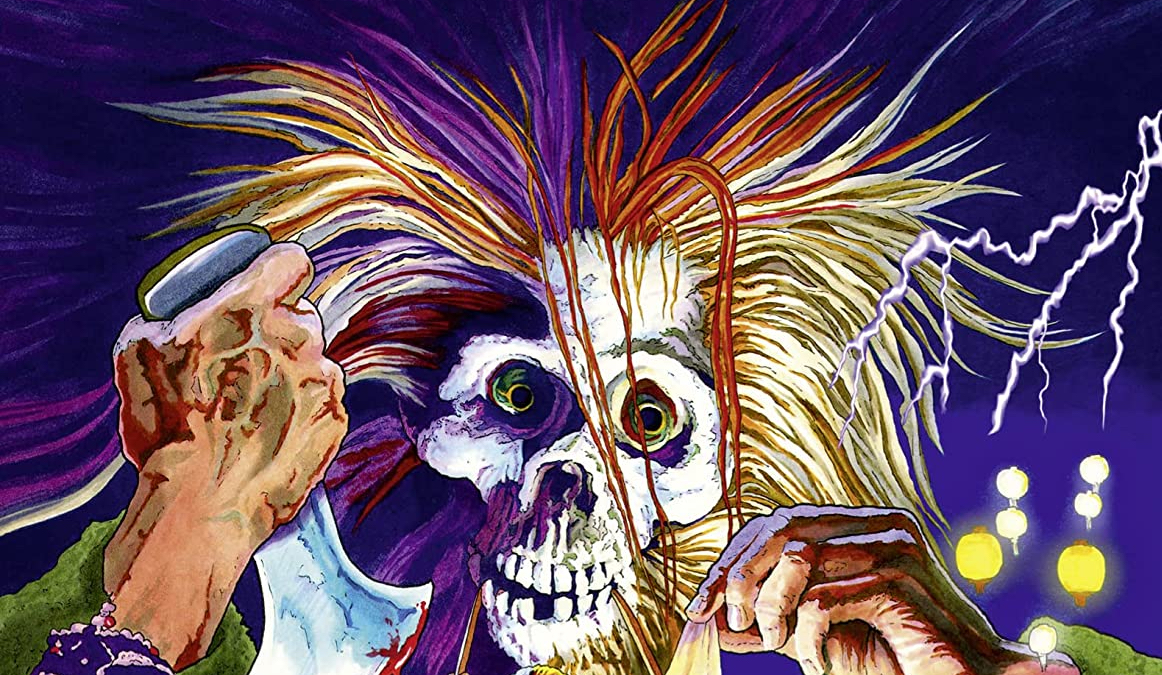 The folks at 88 Films strike again with Shaw Brothers’ Human Lanterns.  The clever martial arts serial killer horror mash-up has been given the deluxe treatment.

Director Sun Chang’s film if released in 2022 would be the talk of talk.  Its razor-sharp mashup of wuxia and horror is so good it’ll leave any fan of either genre rabid converts.  As cynical as it is stylish, which it is very stylish, Human Lanterns is the type of film that if one is into the “likability of characters” should look elsewhere.  It’s that sobering outlook leaning into the horror and darker Shaw entries that understand “everyone’s bad”.

Two warring Kung Fu masters (Tony Liu and Kaun Tai Chen) are the beginnings of an opportunity.  That opportunity is a deadly one, as a psychotic lantern maker (Lieh Lo) finds it is his moment to exact revenge on the master that scarred him for life.  Though the means and how is not the type of Yojimbo style histrionics.  No these are much more murderous and malicious.  As the dueling masters circle themselves in a deadly game our lantern maker continues his even deadlier game.

It should be noted that this film is not for everyone.  Though writer/director Sun Chang is elegantly shot, directed, and scripted the darker aspects of the film many will find Umbridge with.  Those with any issue with violence that is associated with darker “serial killer” films should just stay clear.  There are moments of true terror that people will outright reject.  Which is understandable, watching a scene of a woman being skinned is not for everyone.  For those that can get beyond the more extremities of the film will find something truly powerful.

One wonders why watch something so cynically dark?  Sun Chang’s film shows the bloated disgusting egos of elite rich men and their treatment of women.  These rich men just happen to be Kung-Fu Masters.  The way he is able to simply make parallels to what these men do to women and what the killer does is the most electrifying part of the film. The fact that there isn’t an expected turn for these two men is so uniquely cynically egocentric that it elevates Human Lanterns beyond its mashup origins.

Human Lanterns may not be for everyone but for those more adventurous world cinema-goers will be treated to something elevated even above the best of the Shaw Brothers Studio film catalog.

NOTE: The film does depict sexual assault and extreme moments of gore/torture.

The HD Transfer from the Original Negative is just an outright gorgeous transfer.  This is one of the Majestic Film transfers, so the original coloring and titles have been replaced by newer cleaner ones.  The handsome sharp image is as clean and flawless as the day it was produced. Many will critique the grading on the transfers but what we get in return and the fidelity of the image is just too good in a way that any of the Shaw Bros Studio films have looked.  Human Lanterns and its transfer is uniquely beautiful.  The sharpness, the black levels, and contrast levels are perfectly rendered here.  88 Films continues a fruitful relationship with Majestic Films/Shaw Brothers with these beautiful Blu-Rays.

Note: some of the more graphic footage quality level is lower than the rest this is because the footage was from another home video version.

The audio commentary by Kenneth Brorsson and Phil Gillon of the Podcast on Fire Network.  Brorosson and Gillon waste no time in discussing this truly great genre mashup.  They open by discussing the balance of elegance and ugly and their general thoughts.  Some of the details include the unlikability of the main characters, the lack of horror and wuxia films, the difficulty of any sort of genre mashup, an interesting side conversation about the lack of Cantonese language films and why, the career and work of director Sun Chung and much of his filmography, the various home video versions that were released and the lack of graphic footage and an extended conversation of the various scenes that were edited, another side conversation that discusses the fall of Shaw Brothers studios in the 80s and lack of understanding the market, discussions of the various actors and their careers post and pre Human Lanterns, a discussion of the masterful action scenes and action director/legend Tang Chia, and much more.  Another banger of a Commentary track by Brorsson and Gillon like their work on Money Kung-Fu is deeply informative and entertaining. As always with the duo there are a lot of films that they reference, so keep a pen and paper handy as you’ll want to find these if you’re finding that Human Lanterns is your jam.

A Shaw Story – an Interview with Susan Shaw (13:48) – the interview begins with Shaw discussing her first film in 1974, A Haunted House, and how she began working with the Shaws and director Li Han-Hsiang.  Some of the other details from the interview include a discussion of her willingness to be nude in films as well as other actresses in the Shaw Brothers erotic films of the 1970s, going to Cannes and the trouble, fallout, and eventual blacklisting, how she got Human Lanterns after the Cannes debacle, the work in the film, how Sun Chang worked with the action choreographers to get his specific look, and much more.  With English Subtitles.

The Beauty and the Beasts – An Interview with Linda Chu (14:39) – an all-new interview with the actress discusses her origins as an actress and more.  Chu discusses the conditions of the Shaw Brothers’ set, the grooming/training the Shaws did for their starlets during the era, working with Sun Chung, the work during the torture scene, and much more.  The interview is a series of title-card prompted questions.  With English Subtitles.

Lau Wing – The Ambiguous Hero (51:11) – the interview with Lau Wing begins with a pre-text stating that the interview audio was not up to their usual standards.  The sound is a bit distracting but as the most will be watching this with subtitles as the actor is speaking Chinese (Mandarin or Cantonese unfortunately I’m unsure but more than likely Mandarin).  The interview is a series of title card prompted questions that thoroughly go through the actor’s career including why he made the move away from Shaw to Golden Harvest to the workload at Shaw and other studios to a discussion of Human Lanterns and much more.  Regardless of the audio issues, the interview is truly a fascinating discussion of Lau Wing’s career and Human Lanterns.  With English Subtitles.

Human Lanterns will be relished by Horror and Martial Arts fans alike.  88 Films has done justice to this little-seen gem.  Highest Possible Recommendations!