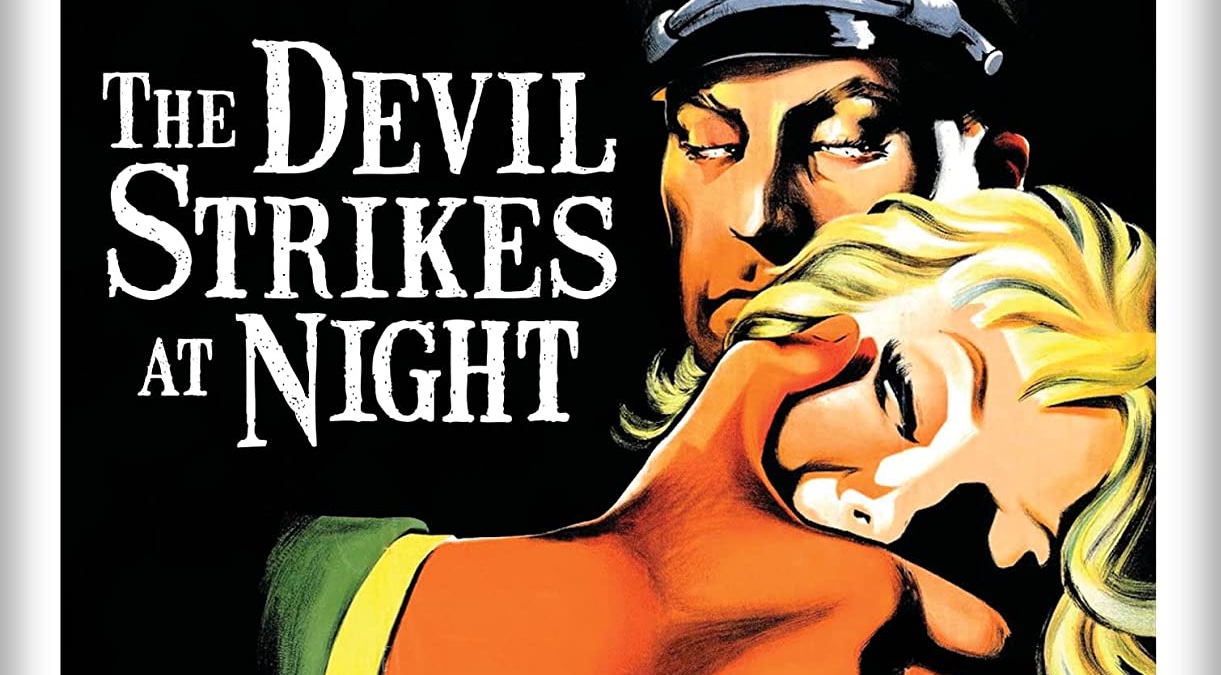 The quest for a serial killer in WW2 Nazi Germany is an indictment of corruption from top to bottom in Robert Siodmak’s astute The Devil Strikes at Night.  New to Blu-Ray from Kino Classics.

Robert Siodmak returned to Germany in the 1950s to direct.  The result is one of his best films; The Devil Strikes at Night.

What begins as an open and shut case of a Barmaid (Monkia John) and her Nazi Officer Lover (Werner Peters) is far more sinister than a simple crime of passion.  Newly stationed Police Detective Kersten (Claus Holm) thinks this is a work of a serial killer.  He is right and quickly finds the man (Mario Adorf) responsible.  Though it will be harder to pin the murders on the man even with a full confession.  Especially, when the SS and even the Feuer himself find out that the man is so resolutely Aryan. With the wheels of fascism in motion will the Detective be able to bring to justice the right man.

The Devil Strikes at Night is as sobering a police procedural as one will see.  The way that Siodmak slowly but surely ties the noose around the viewer’s neck as they can see that even police work is corrupted by the Nazi’s political ideals.  The way with an acute distance to the proceedings Siodmak is able to show us how the political machine works to grind those unwilling to comply.

As frightening as the serial killer, Siodmak understands perfectly how fascism sullies every piece of society.  So much so that at the end of the war, a police detective with clear and undeniable evidence cannot convict or bring to trial the real killer.  Scarier still is that this isn’t a work of mere fiction but based in part on the real-life case in Germany of Bruno Lüdke who was linked to 51-murders over a 15-year period.

The Devil Strikes at Night is a reminder of how any political ideal based in large part on violence and corruption will seethe through every part of a society until nothing is left.

The restoration work done here is simply amazing. The black and white photography glows on Blu-ray.  There is nary a scratch or blemish during the runtime of the film.  Overall the image is razor-sharp and perfectly balanced contrast levels giving you the feeling of a beautiful 35mm archival print.

The audio commentary by Imogen Sara Smith begins with how the film is a noir but also many others and how hard the film was to see until this release.  Some of the details that Smith covers during her track includes a discussion of how relevant to our times the film is, context for the time and place of the film, Siodmak’s career and his time in Germany before he fled the country, the importance of Siodmak and Fritz Lang coming back to [West] Germany to make films, films that were either produced or shot as a new genre called “German Rubble Films”, the “Good German” troupe which this film relies on, the lack of discussion of the Holocaust, how this film and others during the era were finally seen in the early 1990s, a reference to another film of the era called Black Gravel [link to Kino’s Blu-Ray if of interest], and so much more.  Smith’s commentary track is a vital listen and accompaniment to the film.  She gives not just context of how the film was produced, but the history that is so vitally important to understand the importance of this film, Siodmak’s work as a whole, and post-war Germany and its film production.

The Devil Strikes at Night is a fascinating piece of police procedural.  Highest Recommendations.

Kino Lorber’s Blu-Ray Edition of The Devil Strikes at Night is out now.