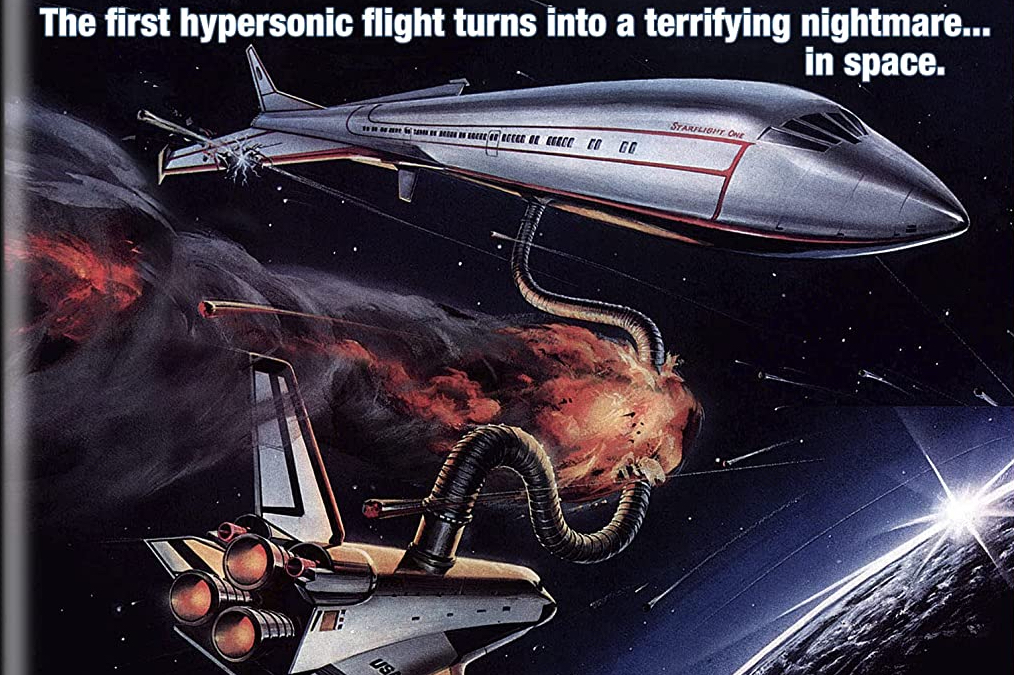 With an all-star cast Airplane II: The Se… sorry Starflight One makes its Blu-Ray Debut thanks to Code Red with a new 2K Master.

There are some films that just feel like you’re being fucked with.  Starflight One with its all-star cast and VFX work by THE John Dykstra appears to be a forgotten cult classic.  The thing is that it is forgotten but it’s a cult classic for the wrong reasons.  This isn’t some tight claustrophobic sci-fi thriller.  It’s an overwrought, overheated, overarched, over-everything melodrama.  The tale end of the subgenre of the disaster film the mid-flight-disaster movie feels like no one watched Airplane II: The Sequel which was released the year before this one or even the original Airplane! never-ever dare tread on this ground.

A new sub atmosphere jet, that looks oddly like the concord, for its first 90-minute flight from Los Angeles to Australia!  Of course, there’s going to be problems.  Problems that leave them stranded in literal SPACE!  Enter the Fall Guy himself, Ace Pilot Captain Cody Briggs (LEE FUCKING MAJORS), who must keep level heads and take charge if the crew and passengers are to make it out alive.  All Briggs needs is his trusty fly-fishing cap and the love of his lead air stewardess (played by Lauren Hutton no less).  Satellite garbage, gold bricks, a dead senator, mid-space rescues by astronauts, Ray Milland as the billionaire shitass that funded it all, and more!!!

The film is light on action and heavy on melodrama is no surprise when one learns that this was an ABC movie of the week.  Though they’ve thrown all the bells and whistles – big-name actors, splashy VFX, reasonable sets – at it to make it attractive as hell.  One wishes they had spent more of the money on script development if they weren’t leaning on the action set pieces to thrill.  Though the action is fun it’s because the set pieces are goofy without an ounce of true dramatic heft to it.

All of this falls on Director James Jameson.  A career TV director through and through.  Starflight One is without a single dynamic frame or stylish piece of direction.  The film feels like a TV movie it is only the fact that most of it is shot on location that gives the film any sense of energy.  One wishes that Jameson had some sort of enthusiasm for the picture to give us something, but every piece of action is the same sort of workmen-like quality.

Regardless of the quality of the film, the Brand New 2K Master is aces!  The image plays out in a 1.85 aspect ratio though it appears to be shot full-frame (1.33).  A simple comparison of the trailer and the film of select shots shot that the 1.85 framing is a much more pleasing look not sacrificing much in the way of information.  That said the image other than some minor scratches and blemishes is near flawless. Those scratches and blemishes appear to be ingrained into the materials they were using.  The model work by Dykstra’s group looks beautiful here and is the main attraction. The image is an all-around good-looking sharp transfer, truly great work by Code Red again, much like the work they did on their recent release of Dirty O’Neil.

Starflight One looks great on Blu-Ray!