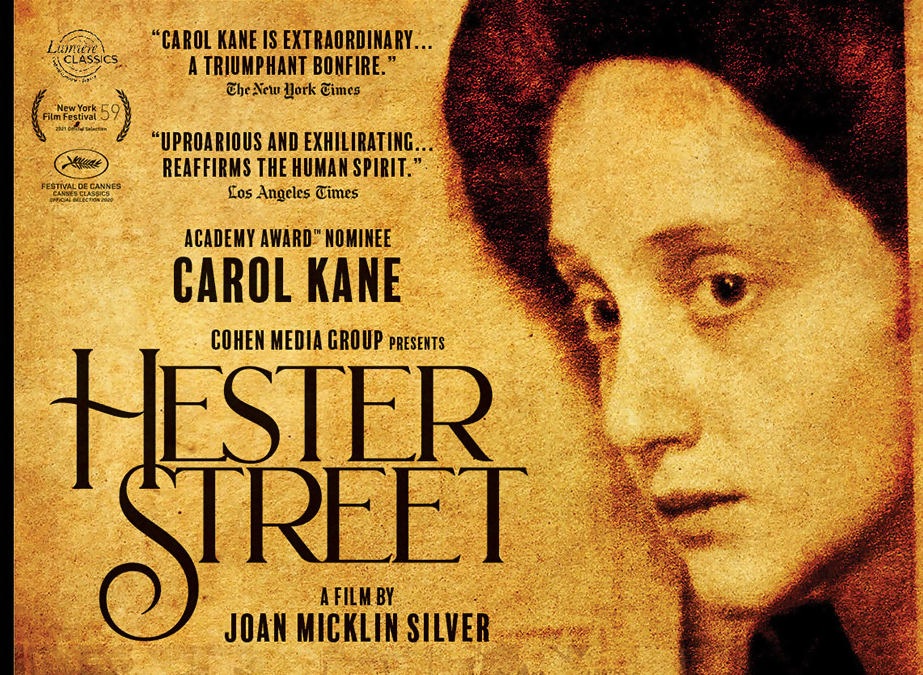 One of the powers of filmmaking and the entire medium of film is its ability to transport an audience to a time and place.  A time or place that maybe one would never be allowed to see.  A time or a place that is no longer.  Writer/Director Joan Micklin Silver’s debut feature Hester Street manages to do both in the loveliest and most beautiful ways.

Taking place over months at the turn of the century as Jake/Yetel (Steven Keats) who has enjoyed the freedoms of being in America while his wife Gitl (Carol Kane) and son are in Russia.  This changes when after the death of his father Gitl and their son arrive at Ellis Island.  Jake is already involved with another immigrant a dancer Mamie (Dorrie Kavanaugh).  Gitl only wants to acclimate but keep her traditional values as a Yiddish Jewish Woman is only met with abuse by her husband.  As Gitl begins to find her way with the help of her Landlady (Dorris Roberts) and fellow traditionalist and boarded Bernstein (Mel Howard) will her husband find his way back?

Hester Street is a film of intimate charms and life on life’s terms.  Many have dubbed this a romantic drama which is belying of this tale of life as an immigrant and how that can fracture a family and relationships.  Much of the drama within Micklin Silver’s adaptation of Abraham Cahan’s novel is about the assimilation or lack thereof to another culture.  Hester Street never makes this heavy-handed or maudlin.  There is an easy-going charm that Micklin Silver imbues the film with that though we are seeing at times harrowing moments, it’s never dwelled upon.   The film’s tensions are built from the relationships between men and women in all their forms and how one can affect, for better or worse, another.

The simplistically complicated nature that Micklin Silver is able to bring to every relationship in the film is masterful.  A simple gesture or moment or spoken word in Hester Street has meaning.  Running a brisk but languid 90-minutes the film feels like a meal that you want to return to time and time again because of the depth that is packed within.

Matching Micklin Silver blow for blow is the quiet power of Carol Kane’s performance as Gitl.  A performance that netted Kane an Oscar Nomination for Best Actress.  Not showy or performative in any way, Kane is luminous and devastating as Girl.  There is an empathetic quality that allows you to understand every moment of the performance.  Be it learning English from her Son or talking to Bernstein at the table or the moment when she reveals her hair to her husband … Kane is pitch-perfect.  Even in the final moments, Kane is able to complete the character’s journey with simple body language and speech.  It’s a performance of unaffected beauty and power.

Hester Street is truly a brilliant and insightful historical drama.

The new 4K restoration of Hester Street is nothing short of perfect.  The black and white cinematography by Kenneth Van Sickle is positively luminous in high definition.  The image retains all the beauty and luster from the Film Grain.  The dreaded DNR wiping clean any of the affectations of the original image is not present.  The transfer feels organic in a way that the best Blu-Rays.

The archival audio commentary track with director Joan Micklin Silver and producer Raphael Silver is a winner.  Some of the details include the location they used to film, the decision to shoot the film in black and white, the problems of shooting in black and white, the shooting schedule, the limitations and difficulties shooting a period piece on a lower budget, how they achieved Hester Street and street dressing and some issues they had during the production, the amount of direction given to the actors, producing a lower budget film and the concerns with producing, how the managed to “fake” Ellis Island because they could not shoot on-location, finding Carol Kane and casting her in the role, the use of Yiddish in the film, what drew Micklin Silver to the material and parallels to her own story, how they approached staging the outside scenes, how she blocked and directed scenes with time and budgetary constraints, at the time how the actors researched their roles with family members and immigrants in their family and friends, her work with cinematographer Kenneth Van Sickle, the cast and crew screenings and what they mean to a production, Doris Roberts and her contributions to the script, the Academy Award nomination Carol Kane and what that mean to the film and everyone, and much more. The second half of the commentary is a bit more silent but other than that this is a great track with Micklin Silver discussing the trials and tribulations of making this very special film.

On Hester Street (31:48) – the all-new interview conducted by Professor at Fordham University Shonni Enelow; Micklin Silver discusses Hester Street.  They discuss how she began with short films, where she found the book, the work trying to make a feature-length film as a female director, the milieu of sexism at the time, how her husband became her producer, how her father influenced the development of the story as her father was also an immigrant, the casting – specifically casting of Gitl and how Carol Kane won the role, the changes that Micklin Silver to the story to change the focus to the wife/Gitl, how the film got broader distribution, working with actors as a director, and much more.  The interview was recorded during the theatrical re-release of Hester Street.

Career Overview (21:14) – a continuation of the conversation between Micklin Silver and Enelow.  The two first discuss how Micklin Silver’s husband became her producer, how they worked together, and the creation of Midwest Films (their production company), working and how they came to work on Bernice Bobs Her Hair (which was a TV Movie), great anecdotes about Shelly Duvall on Bernice Bobs Her Hair, her preference of the Movies projects over her TV projects, how she began to choose her films later in her career, and much more.

Original opening title sequence and outtakes with audio commentary by Daniel Kremer, author of an upcoming book about Joan Micklin Silver (8:23) – Kremer discussed this very interesting opening.  Some of the other details discussed by Kremer include; Advice given by both Elia Kazan and Eleanor Perry, the very different opening with archival footage that’s interwoven into the opening, how this opening mirrors the actual novel the film is based on, and much more.