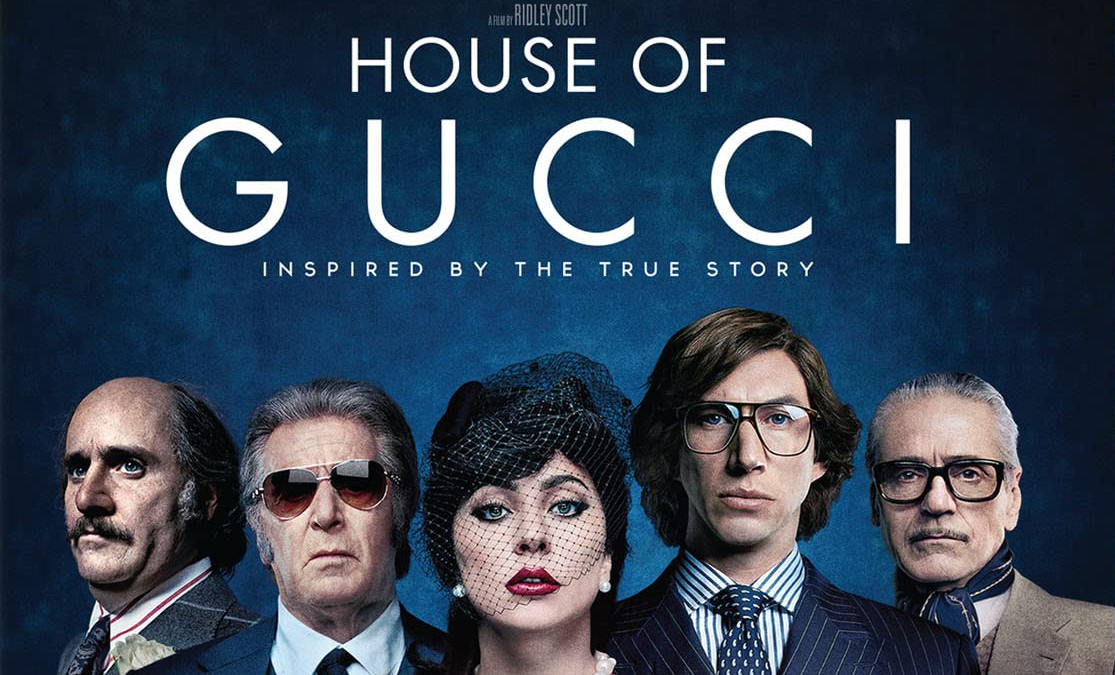 This line comes near the end of House of Gucci, director Ridley Scott’s SECOND ginormous epic of 2021.  Without context, one would think it’s a joke.  It is but also it isn’t.  Which sums up the arched tone of Scott’s epic (at least in length) about the backstabbing, money-grabbing, infighting, and eventual criminality of the Gucci family… oh and some fashion stuff with a guy named Tom who saved the entire company (a side note but could have been its own movie).

Director Scott armed with his elite group of behind-the-scenes artisans (like Production Designer Arthur Max, Janty Yates with costuming, Dariusz Wolski as cinematographer) and a who’s who of Award-Winning Actors (Pacino, Irons, Gaga, Driver, Hayek… 30 Seconds to Mars in heaving make-up FX) there’s almost too much of a good thing.  The overwhelming talent belies a runtime 20-minutes shy of 3-hours … which doesn’t seem enough for everything Scott and screenwriters Becky Johnson and Roberto Bentivegna wanted to execute.

Adapted from the tomb by Sara Gay Forden, The House of Gucci: A Sensational Story of Murder, Madness, Glamour, and Greed.  Forden had the luxury of 300 pages to give us a full view of the Gucci family beyond the illustrious fashion house.  That milieu and context is here but not as fully realized as one would have hoped.  The bones are here but Scott’s film feels abbreviated for the sake of a theater run time.

The result is a film that though highly entertaining crisp melodrama lacks that microscopic eye that Scott has for flourished deeply researched details.  There are moments that lack the history of Gucci and the connective narrative/character development of the various players at play.  Though the film ultimately suffers narratively, this does not impede one’s enjoyment of the proceedings.

Though the film is headlined by a who’s who of award winners the film falls solely on the shoulders of Lady Gaga.  Playing Patrizia Reggiani/Gucci as this sort of full-bodied play on the Italian “bombshell” stereotype of the 1960s and 1970s by way of desperate housewife feels like it allows her to play all aspects of Reggiani.  Gaga here is full-on arched overheated with an accent that could have toppled the film.  It doesn’t though, its breathes the lively sort of playful acting that is needed for a film that ends in Murder.

Everyone appears to have followed Gaga’s arched tone with varying degrees of success.  Jeremy Irons is incapable of playing a false note and here as Rodolfo Gucci, it’s no different.  The biggest issue comes from Adam Driver who appears to have been cast in a very SERIOUS drama about the Gucci family.  His work here is so serious, which may have been the case, that it’s only a matter of time before you begin to bore of his character.  The two that benefit greatly from the melodramatic arched tone are Pacino and Leto.  The duo play Aldo and Paolo Gucci as though they were in an off-off-off Broadway production of Don Quixote.  The movie is better for it.  As Aldo and Paolo bicker and make every stupid possible move one could make … we’re delighted by all this.  The chemistry between the two is papabile.  Never mind their accents, yes both actors, are bordering on nonsense.  Pacino and Leto are electric feeding off one another’s performance trying in what could only be considered an “actor-off” (think … dance-off but acting!).

House of Gucci isn’t perfect but damn, is it an entertaining melodrama. One that will have you quoting some of the more ridiculous lines with glee.  Yeah, you can count on this one being a slow but sure ascent to Cult-Classic status.

There’s never been a Ridley Scott film put onto to Blu-Ray that didn’t look positively amazing. Here is no different.  The Blu-Ray Transfer is simply stunning, designed to show off the lush cinematography by Dariusz Wolski, detailed production design by Arthur Max, and most importantly the beautiful costumes designed by Janty Yates.  There are literally zero complaints or critiques about the transfer, as the transfer pushes the format as far as it will go.  The only comment is that one wonders why or more importantly WHEN is House of Gucci going to be given the 4K UHD treatment?  For now… this Blu-Ray is a visually perfect presentation.

The Rise of the House of Gucci (10:14) – Go behind the scenes to discover how Ridley Scott’s vision of this astonishing story fell into place.  Discussion of sending the script to Lady Gaga first and how the rest of the cast fell into place, Leto’s extreme makeup, Scott working with Pacino for the first time, the “Ridley-Grams” and his directorial style, and much more.  With comments by Ridley Scott, producer Giannia Scott, stars Lady Gaga, Al Pacino, Jeremy Irons, Jared Leto, Adam Driver, and more.

The Lady of the House (5:35) – An up-close look at Lady Gaga’s performance as Patrizia Reggiani and how her powerhouse charisma and unwavering dedication breathe life into this complex character. Scott’s seeing Gaga in A Star is Born and wanting to work with her, the research that Gaga did in Italy during the pandemic, comments by other actors, Iron’s admiration of Gaga, the real-life Patrizia, where the “Father. Son. House of Gucci” line came from, and more.  With comments by Scott, producer Giannia Scott, stars Lady Gaga, Leto, Irons, and others.

Styling House of Gucci (5:26) – A deep dive into the visual delights of the film, from aesthetics to attitude.  A look at the trifecta of Production Designer Arthur Max, Cinematographer Dariusz Wolski, and Costume Designer Janty Yates that help Ridley Scott bring his vision to life and to his own admission and accurately “I have the best team in the business”.  Discussion about Gucci opening their vaults to send the original clothing to LA for reproduction, Yates’s work and her collaboration with Gucci, Max finding the real-life locations and the sets they built, and much more. Comments by Scott, Yates, Max, Wolski, Irons, Pacino, Leto, and more.

House of Gucci has its best foot forward on Blu-Ray with dazzling picture and sound.  Recommended!!!

The Blu-Ray Edition of House of Gucci is out now!