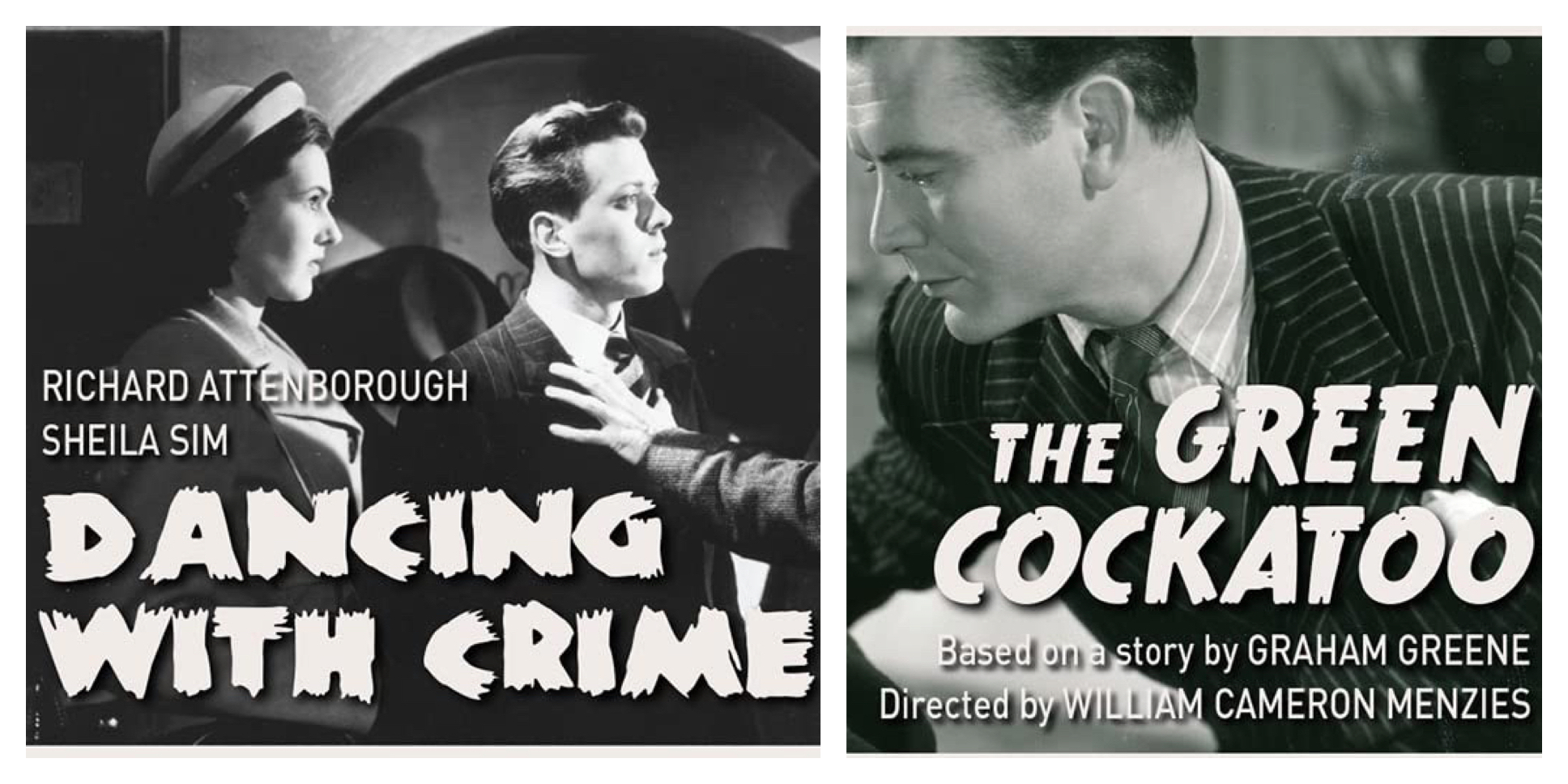 A double dose of UK Noir’s are the flavor that Cohen Media has wrapped up in this package.  Both Dancing with Crime and The Green Cockatoo are unexpected winners in the best way possible.

It’s all I kept thinking about as I watched a young virile Sir Richard Attenborough beat the holy hell out of two dudes.  Dancing with Crime plays like a strange sort of contextual readjustment for generations that have seen Attenborough and his progeny become the face, or voice, of Nature and Wildlife protection.  In one scene the petite Englishman with a verisimilitude of an ex-military man takes on British thugs with violent efficiency.  Dancing with Crime becomes a wild “will they or won’t they” sort of film.  The pitch is almost too good.

Ted (Attenborough) and Dave (Bill Owen) are lifelong friends.  After serving during WW2, the men went their separate ways.  Ted now a Taxi Driver.  Dave a low-level hooligan.  After a chance meeting, Dave drags Ted along to pick up his money from a robbery.  Things go astray and Dave ends up dead in the back of Ted’s taxi.  An apathetic police department forces Dave and his girlfriend Joy (Sheila Sim) into the mystery of Dave’s death.  Ballroom Dancers, hitmen, smart criminal bosses, impotent police detectives, and an ass-kicking Taxi Driver all converge into a bloody good end.

Much of the success lays on Attenborough’s shoulders.  The actor does a great job in the first half of the sort of “good decent chap” that when things get darker… you’re scared for Ted.  What works in the film’s favor is the Noir conventions say that Ted could be killed off twenty minutes in.  Which he may or… may not.  Part of the fun of the film is once Attenborough’s proficiency is made clear, the adroitness of the criminals he’s dealing with are found.  It becomes almost Hitchcockian in the way that you are never sure who will get the drop on who.

Dancing with Crime like any good Noir plays by its own rules and succeeds wildly at the cheeky game it plays.

Much like Dancing with Crime, seeing John Mills turn from goofy Piano Player to Rough and Ready scrapper is both unexpected and delightful.  Though the film feels very old-fashioned compared to the Richard Attenborough starrer as Ray is stranded as a literal “Damsel in Distress”. This role will have people literally shaking in frustration as Ray’s Eileen cowers at anything that comes her way.

Director William Cameron Menzie’s cautionary tale of a young woman going to London having one of the worst trips ever is two degrees away from a comedy (The Out of Towner’s anyone) but it’s the adroit lean script co-written by Graham Greene that keeps this one a well-oiled crime thriller.  Though there are a few strange oddities like the older man who damn near accosts Eileen (René Ray) with his wild rantings about how young ladies shouldn’t go to London. These types of foreshadowing do make one chuckle but they’re few and far between.

The Green Cockatoo at 65-minutes is a brisk piece of lean noir crime fiction with a few jagged edges that can be looked over.

The transfer provided by BFI to Cohen Media Group is a truly great Hi-Def upgrade.  The film looks great for a film made 85-years ago.  There are hardly any scratches, specks of dirt on the print they transferred from.  The image is handsome and sharp with a beautiful grain structure that makes the transfer really lean into the filmic look.

The transfer provided by BFI to Cohen Media Group is decent.  The problem here is the source material for an 85-year-old film.  The source is the issue, not the transfer itself.  The print is plagued by literal decades of use.  Specks, scratches, and general wear and tear are present.  Though anyone who has the slightest understanding of how prints work and how the deterioration of those prints work, its’ a minor-major miracle this film exists in any format.

The sole extra is a Trailer for Dancing with Crime (1:15)

The combination of Dancing with Crime and The Green Cockatoo is all too good to miss for any fan of film noir. Recommended!!!

Cohen Media Group’s Blu-Ray edition of Dancing with Crime and The Green Cockatoo is out now.