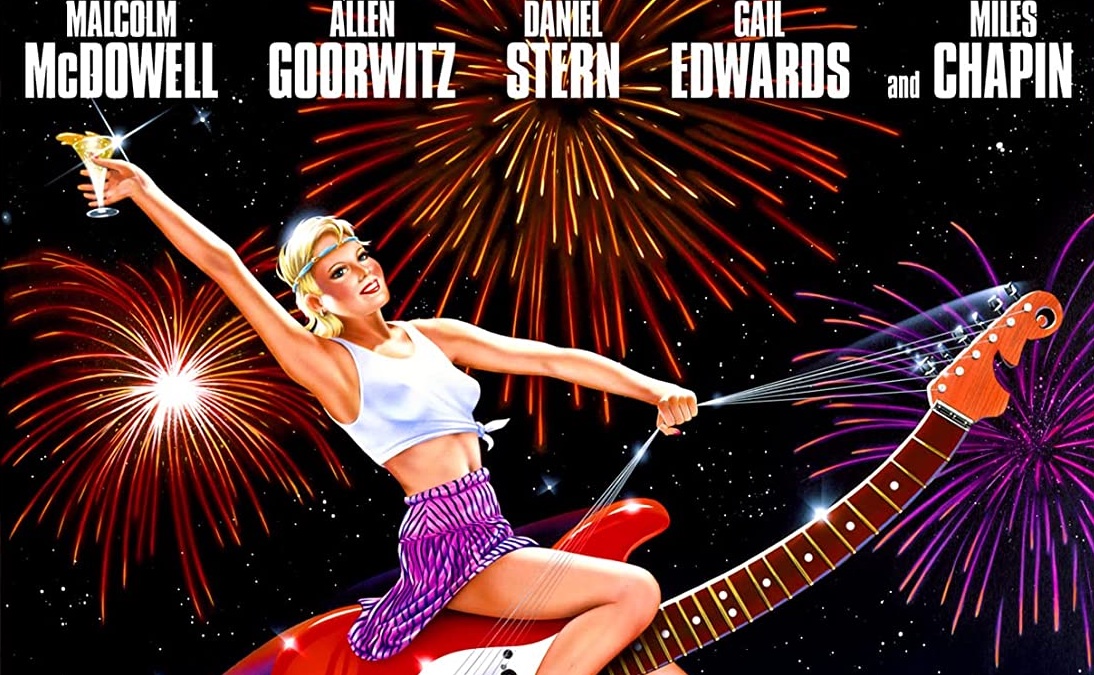 Allan Arkush’s little-seen Get Crazy gets a full-on special edition Blu-Ray release thanks to the fine folks at Kino Lorber.  The results are spectacular.

Get Crazy is a spiritual cousin to Allan Arkush’s classic Rock ‘n Roll High School. In every way, the Punk Rock New Year Musical is a worthy successor to Arkush’s first film.

It’s December 31st, 1982.  The Saturn theater is preparing its annual New Year’s Eve Concert.  Max Wolfe (Allen Garfield) the owner of the theater has grand plans.  Plans that Max (Daniel Stern), the stage manager of the theater, is trying to keep everything together.  But with Wolfe out for the count because he’s dying (not really), and slime concert promoter Colin Beverly (Ed Bagley Jr) has other plans.  Dealing with Beverly isn’t Max’s only concern as he’s dealing with rowdy crowds, rowdier bands headed by the truly insane Piggy (Lee Ving in a masterful punk-rock performance… well because Ving is a Punk Rock God), and much more.  Will Max and the hardworking stage crew pull off the ultimate New Year’s Gig?

What is so entertaining and fun about Get Crazy is there is the same sort of devil-may-care attitude and tone that Arkush brings.  There isn’t a serious bone in this film’s body.  This is a film that has a Mick Jagger/Rod Stewart style star doing lines and lines of cocaine in his personal jet as it does flips.  It’s the type that has its drug dealer be a masked demon with a magical suitcase.  It’s that type of film.

Get Crazy understands music the ephemera around it.  From the crew that helps make concerts happen to the fans to the musicians’ everything is accounted for here and is given a voice.  That voice is represented by actors and musicians like Malcolm McDowell, Daniel Stern, Allen Garfield, Lee Ving, and Lou Reed.  The work here isn’t merely paint-by-numbers but rather inspired performances.  McDowell may be the most inspired as his playful satire of Rod Stewart by way of Mick Jagger is hilarious even before we meet his new “manager”.  Though it’s Lee Ving and his pure-ID Piggy that steals the show.

One hates that Get Crazy has been buried by con-men and underhanded dealings.  One wishes that it was as revered as Arkush’s other classic Rock ‘n Roll High School.  Though this reviewer thinks it will not take that long for Get Crazy to find its audience.  A film this fun, funny, sincere, wild, and good can’t not find one.

The Brand New 2K Master – Approved by Director Allan Arkush is a revelation.  The film’s appearance on Blu-Ray is the first time it’s been on Home Video since the terrible VHS release, Arkush even comments on that in the making-of.  Having seen the film years before through a dubious stream of that Home Video version, this is truly amazing work.  The color reproduction, contrast levels, grain structure, black levels, and sharpness are perfectly rendered here.  For anyone that’s watched Get Crazy, even theatrically at revival screenings, is going to be in for a true Christmas miracle.

The all-new commentary by Director Allan Arkush, Filmmaker Eli Roth hosted by Filmmaker/Historian Daniel Kremer.  Beginning with a discussion of the release of this much-sought-after and rarely released film.  Some of the details include the development of the opening, how the film came to be from Arkush’s time at the Fillmore East, discussion of Bill Graham, the film luminaires who worked at the Filmore East with Arkush, the Helicopter landing in the middle of Los Angeles, Pat Boone almost being cast, the reasons why Arkush used the same song multiple times, where the film started as a period piece/drama and transitioned to a more Airplane-style gag a minute comedy, the development of the script, the amazing work of Lee Ving and how he was cast, discussion of budget, scheduling of the film, how they came to cast Lou Reed, the various Stars (rock and otherwise) who almost were cast as Reggie Wanker and how Malcolm McDowell came to be cast, Dick Miller cameo, how Daniel Stern was cast (and Hanks was almost cast in the role), the work of the various musicians during the concert scenes, the editing of the film and the various people that edited the film, Arkush’s cameo as a balcony jumper, how they came up with McDowell’s Wanker character and his literal Wanker as a character, who owns the bomb prop featured in the film, the greatest concert every played at the Filmore East (according to Arkush), taking LSD, the work of cinematographer Thomas Del Ruth, the work of Malcolm McDowell, the cartoons that would play at the real Filmore East that were programmed by Joe Dante and Jon Landau and how they found the Sunshine Kids short, the previews and general release of the film and its failure, the reason why the studio wanted it to fail, the hatred that Daniel Stern and Allan Garfield that ended in a fist fight, and much more.  Arkush makes sure to note the various rock star cameos in the film, the fallout between Lou Reed and Arkush and how that was solved, and much more.  Arkush and Roth trade directorial information making this more of a lively conversation than a dry informational conversation.  The commentary is both a great entertaining listen and an informative one.

THE AFTER PARTY (75:43) – is an all-new making-of Documentary about the making-of Get Crazy.  Beginning with a great bit with Allan Arkush.  Arkush, hosting the making-of, discusses the origins of the Blu-Ray we’re watching.  The director even mentions how COVID created challenges for not only the release but the making-of.  This is more of a rowdy conversation about the film.  The making-of charts the origins and history of the Filmore East and the people that were involved in the development of the script to the con men that were the studio to the preproduction to the production to the eventual release and its forced failure and the film’s rise as a cult classic.  Some of the great details include Stern’s experiences (which was very different than you’d think for a young 24-year-old actor), the experience McDowell had with attempting to sing at the song, the extras, and how they continued to show up and eventually lived in the studio location, a hidden Blue Thunder reference, some truly great Lee Ving stories, some great discussion about the editing and post-production of the film, and much more. Featuring comments by Malcolm McDowell, Daniel Stern, Howard Kaylan, Stacy Nelkin, Gail Edwards, Lori Eastside and the Nada Band, Lee Ving, Allan Arkush, producer Hunt Lowery, Screenwriter Danny Opatoshu, filmmaker Jonathan Kaplan, journalist Anne Thompson, and others. The making-of features some great behind-the-scenes photos, posters, and other images.

FAN FICTION (8:16) – the Podcasters NO DOGS IN SPACE (who specialize in Punk Rock discussions) create life stories and discographies for Reggie Wanker, Lori Eastside & the Nada Band, and Piggy.  Filmed via Zoom the podcasting duo Carolina Hidalgo and Marcus J Parks discuss with Allan Arkush, great enthusiasm the live take times of the various bands featured in the film.  The Roman à clef is the kind of fun featurette that one wishes more discs about fictional arts (like actors, directors, and bands) would do.

World Premiere Music Video 1: GET CRAZY (3:45) – the Theme Song by Sparks (1983 Made for MTV), yes the one from the Edgar Wright musical documentary is here in all its VHS quality glory.  The video does not feature the band but rather a series of clips edited together to the song.

World Premiere Music Video 2: NOT GONNA TAKE IT NO MORE (3:59) – Lori Eastside & the Nada Band (1983 Made for MTV).  This is the entire musical performance, from the film, without any narrative plot points cut in to create a scene for the film.  This music video is pulled from the remastered film elements intercut with the music video’s extended shots.

World Premiere Music Video 3: NOT GONNA TAKE IT NO MORE (3:49) – Lori Eastside & the Nada Band (2021 Return Performance of the Original Song). This video by the original “band members” via Zoom is a lot of fun.  This is not a polished video but still a lot of fun seeing the various actors have a great time and where they decided to film their portion.

TRAILERS FROM HELL (4:22) – a micro-commentary for the trailer with Allan Arkush.  Arkush begins with how he got to making Get Crazy and also the fact that the negative and soundtrack element were lost once legal proceedings began to happen to the studio execs who turned out to be common criminals, then goes into the trailer itself.

Theatrical Trailer (1:32) – the same trailer that Arkush discussed on Trailers from Hell, without the commentary of course.

Get Crazy is a must-see cult classic in the making.  HIGHEST POSSIBLE RECOMMENDATIONS!!!

Kino Lorber’s Blu-Ray Edition of Get Crazy is out now.