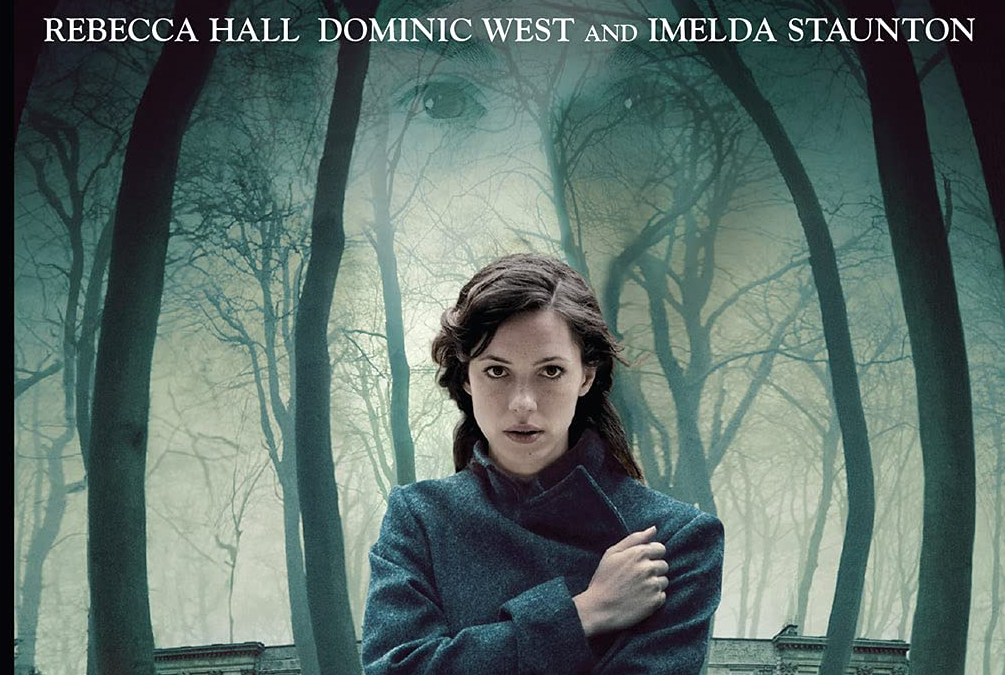 The Awakening is a clever ghost story made all the better by the truly wonderful Rebecca Hall.  Cohen Media and Kino Lorber have teamed up for this 10th Anniversary Blu-ray Edition.

Not all ghost stories have to be frightening in the traditional way. Co-Writer/Director Nick Murphy sides on the “ghosts are not the real monsters” vein of storytelling in The Awakening.

It is post-WWI and England is filled with supposed hauntings.  Florence Cathcart (Hall) debunks said hauntings and ghost appearances.  Cathcart is a no-nonsense hardboiled piece of badassery that smells a con a mile away.   Most of the time these apparitions are merely con artists bilking money from families who lost their sons/husbands/fathers in the first great war. Though the tough-as-nails investigator and writer is drawn to the mystery of a dead boy at a boarding school for wayward boys.  Brought there by Robert Mallory (Domonic West) and Maud Hill (Imelda Staunton) a teacher and housekeeper at the school respectively.  As Florence puts this ghost through the tests, she quickly realizes that there may be more than first appeared as connections to this ghost and her past tighten.

The slow burn nature of the narrative and mystery at the core of The Awakening is where the film draws its power. An emphasis on character and behavior over scares and dread allows for the rare dramatic horror film (usually it’s a horror drama). Though there are still those set pieces you expect from a ghost film.  Murphy manages to create a film that feels more weighted toward the drama and the characters and their trauma.

It makes sense in the best possible way to cast Rebecca Hall in the lead.  The actress has over her career seemed to be adept at playing fractured souls in search of solace or healing.  Here as Cathcart, she’s someone who at first glance is emotionally distanced for specific reasons.  Those reasons quickly evolve and change, though not in the way you think.  Hall’s character has always had the same trauma, it’s our perspective on it that changes.

The work done by West, Stauton, and Isaac Hempstead-Wright supports Hall’s lead performance in the best way possible.  Individually their work is as accomplished as one would expect from these British Acting titans.  Hempstead-Wright in a very early role is as good as he was on his massive HBO show and shows all the promise and craft even at such an early age.

The story does have a “twist” but not in the way that one would expect.  The script by Murphy and co-writer Stephen Volk manages that trickery of making that third act turn feel earned and not crass as many twists feel.  It’s what makes The Awakeningrise above others of the sub-genre.

The transfer provided by StudioCanal is a solid sharp transfer.  The image by cinematographer Eduard Grau is desaturated and lacks really any true definition or pop in color but that’s by design.  The image’s contrast and black levels are near perfect with much of the film lit naturally or in low-level light.  Even during the darkest scenes the transfer always remains sharp and well defined.

Deleted Scenes Introduced by Director Nick Murphy (28:14) – Murphy gives a great introduction about the work done in the editing process, how it differs from television and the work (and emotions) that go into the cutting of scenes.  The six scenes are Florence in the Park, meeting the Reverend, The Doll’s House introduction scene, Maud’s distressed (the kitchen scene), Maud cross with Tom, and the Lavish Room.  Murphy goes deep into the reasons why the different scenes were cut out and oftentimes his discussions about the scenes are longer than the scenes themselves.

A Time for Ghosts (24:47) – the archival featurette gives great context to the timeframe that Murphy set the film in and just how tragic it was that post-WWI and the loss that brought to England because of the mass amount of death, inability to bring those home that passed, the inability as a nation allowed themselves to grieve, how this accentuated the rise in the type of spirituality and interest in the afterlife at the time, and more. Comments by director Nick Murphy, author Juliette Nicholson, actor Rebecca Hall, and actor Dominic West.

Anatomy of a Scene: Florence and the Lake (15:16) – this archival featurette looking at the pivotal mid-movie scene that changes the context of Florence as a character.  The featurette looks into the way it was written, edited, directed, and acted.  Comments by Comments by director Nick Murphy, actor Rebecca Hall, and actor Dominic West.

Behind the Scenes (36:02) – an in-depth making-of featurette.  There is a surprising amount of wealth in this featurette about the story, the context of the timeframe, the characters, the themes, the casting of the film, the production of the film, the costuming, the production design, the cinematography, the issues during production and much more.  Comments by Comments by director Nick Murphy, actor Rebecca Hall, actor Dominic West, actor Imelda Staunton, and producer David Thompson.

Extended Interview with Nick Murphy (19:29) – in this archival interview co-writer/director Nick Murphy discusses the film and how different it is from his previous work.  Some of the details include his thoughts on his own career, his thoughts on genre, and style, how he developed the script that was from a different era, and much more.  The interview feels like a micro-commentary with the wealth of information given by Murphy that isn’t just frivolous info but truly great information about the process of making the film and more.  Bonus he even shows his own director’s camera schematics to achieve a certain set piece for the finale.

The Awakening is ripe for discovery.  Cohen Media has filled the disc with a surprising wealth of in-depth featurettes.  High Recommendations!!!