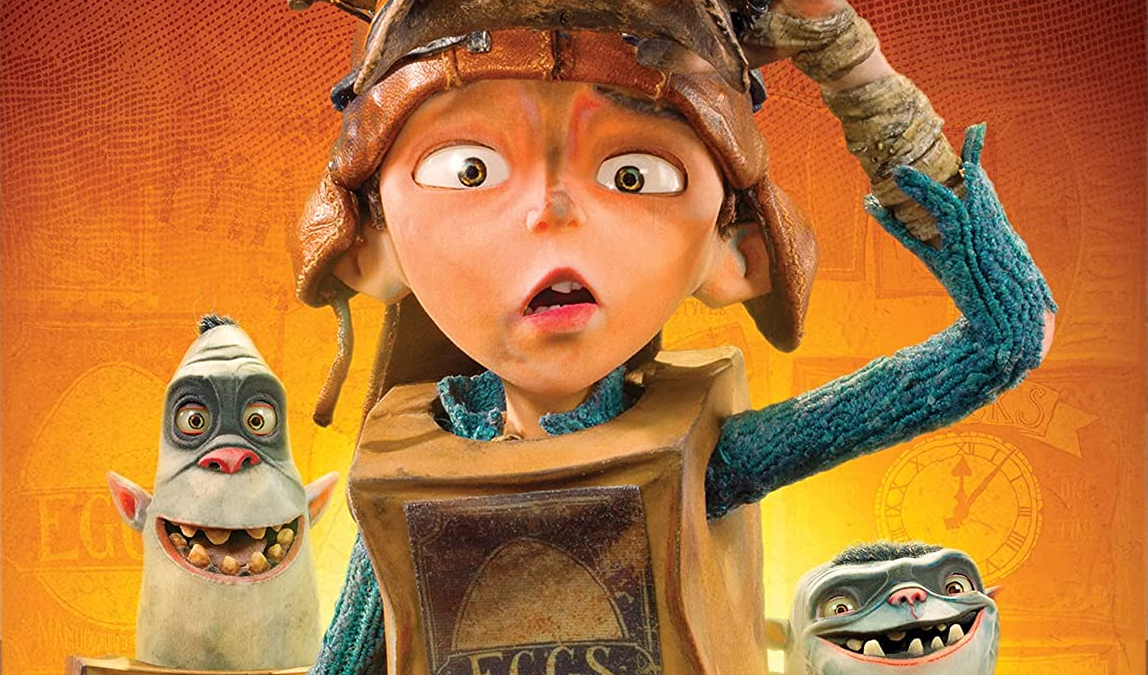 The Boxtrolls gets a fantastic new edition thanks to Shout Factory and LAIKA Studios.  The Blu-Ray comes with a new Transfer and new Extras.

The Boxtrolls is as much a homage to Monty Python and Ealing Studio Comedies as it is to the sort of charming Creature Features of the 1980s and Amblin Family Adventure films.

Part of the fun is just how much the directors Graham Annable and Anthony Stacchi lean into the grotesque caricature that feels like not just Python and Ealing come to life but artist Ralph Steadman.  It isn’t the Boxtrolls that are the disgusting ones but Snatcher and his crew, and the Lords and Ladies of the fictional hamlet of Cheesebridge.  This simple design affectation allows for a simple but powerful visual storytelling that does not require much explanation.

In fact, the film delightfully light on plot exposition.  The Boxtrolls tells its story and narrative visually not just during the action beats but even in the character-building moments.  Rather than have character chatter on we see them interact.  Be it the Boxtrolls themselves or Eggs and Winnie the two children at the center of this adventure.  What the script does brilliantly allows the stuffy and meaningless dialog spout from pompous characters to show.  Though when you have the voices of the likes of Sir Ben Kingsley, Jared Harris, Toni Collette, Nick Frost, and Simon Pegg… you let them ramble on with pomposity.

It is said often about animated films being stunning visual experiences but here it feels like an understatement.  Even someone with only a cursory knowledge of how stop-motion animation is done will marvel at this film.  LAIKA studios, which produced The Boxtrolls is still one of the few places that do create magic in their films.  The kind of filmic wizardry and trickery that will make you stop and think “how the hell did they do that?”

The Boxtrolls has aged wonderfully becoming an even stronger film that subtle messages about race, classic, acceptance, and empathy.  The fact that the film’s themes are done with the lightest of touches makes it an even more wondrous marvel.  Yes, The Boxtrolls is a first-rate family adventure film, but its themes and subtext elevate it to a truly great cinematic experience.

This is another winner of a transfer by Shout Factory and LAIKA Studio.  The 2014 Blu-Ray is solid but side-by-side comparisons to this new disc can see the differences in the decade since the first Blu was released.  Like Coraline the new transfer’s biggest difference is the color reproduction.  The Boxtrolls finds its color palette and color scheme from the films of Powell and Pressburger (yes, Animation can be as arty as Cineaste).  That pastel and earthy color tones definitely shine on this Blu-Ray.  The handsome transfer’s strongest point is its black levels have definitely more complexity here than the previous edition (which wasn’t bad itself).

The archival audio commentary by directors Graham Annable and Anthony Stacchi.  The directors discuss the changes to the opening from Book to Screen.  Details include the bigger scale they took on for this film and how they achieved that, the preproduction artwork and its translation into set design, how they shot the boxtrolls themselves, the various moments of how they achieved the multi-plane stop motion antimation, working with voice actors Dee Bradley Baker and Steve Bloom coming up with the boxtroll’s language and vocalizations, the improvisions of Tracy Morgan, the soundwork and how it was achieved by sound designer Ren Kycle, the song that plays throughout is actually just names of cheeses sung in Italian, the character work and how it was achieved, how they approached the CG FX from a live action model, Travis Knight’s input into the film, the casting of Ben Kingsley and working with the actor during the production, what the LAIKA approach to animation actually is and examples of them during the film, how they got Eric Idle to write Madame Frou Frou’s song, how they approached the action set pieces and how they were achieved, the small but very important character moments, how pre-viz helped with construction of the biggest of action set pieces, how the smoke, fire and other elements were achieved, the way the ending evolved, and much more.  Annable and Stacchi give a great informative commentary that’s both technical and thematic in content which is on par with the great animation commentary tracks.

Inside LAIKA: Discovering The Characters Of The Boxtrolls (933) – is an all-new featurette that looks into the work that goes into creating a performance in stop motion.  The featurette has some great looks at test footage behind the scenes of the process and a look at each character and how they approached them including some great tests for each and some up-close behind-the-scenes photographs.  Comments by directors Graham Annable and Anthony Stacchi, character designer Mike Smith, character sculptor Kent Melton, producer/lead animator Travis Knight, creative supervisor of puppet fabrication Georgina Hayns,

Inside LAIKA: Revisiting The Puppets – this all-new featurette is a look at the various characters in the film.  The 1 to 2-minute featurettes are broken down by character and are essentially micro-commentaries by the animators discussing the animating the character.

Feature-Length Storyboards (96:06) – the all-new feature is similar to the recently released Coraline and Shout Factory GKIDS Studio Ghibli’s Blu-Rays.  As “animatics” have become a vital part of the animation process this is a vital including, especially for anyone interested in any form of animation including stop-motion.  It’s a great way to compare the finished product and how much character and subtly the animators place into the completed animation.  This also if watched in tandem with the Coralinefeaturette can see the technology they use to create the storyboard/animatics evolve as this version is much more refined.

Dare to be Square: Behind the Scenes of The Box Trolls (33:17) – This carry-over from the original Blu-Ray disc, like the one from Coraline disc, is still an excellent making-of documentary. The 33-minute documentary covers all aspects of the production leaving literally no stone unturned.

The Nature of Creation (2:54) – an archival EPK-style featurette looking at the creation of everything in the world of Boxtrolls.

Trolls Right Off the Tongue (2:47) – an archival EPK-style featurette looking at the voice work to bring the Boxtrolls to life vocally.

Allergic to Easy (2:58) – an archival EPK-style featurette looking at the film’s villain and the complexity it took to bring it to life.

On the Shoulders of Giants (2:29) – an archival EPK-style featurette looking at the making of the mecha drill.

The Boxtrolls in its newest edition is a perfect complement to the film.  Shout Factory’s release of this LAIKA Edition is a must-own.  HIGHEST POSSIBLE RECOMMENDATIONS!!!!