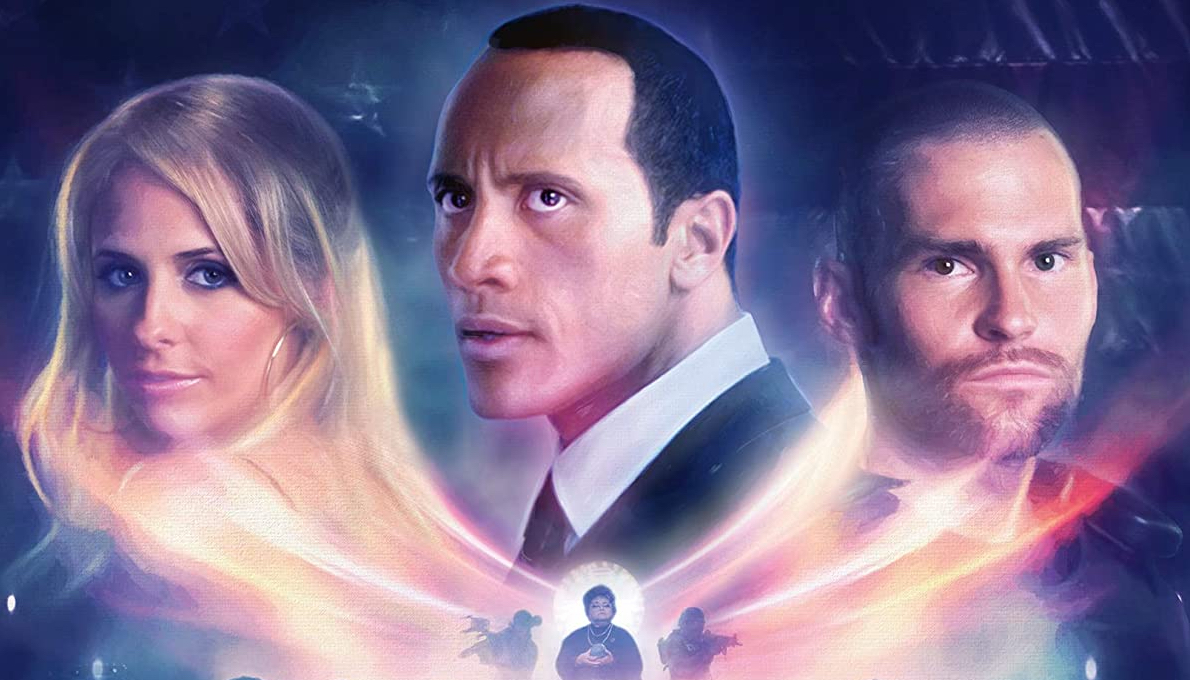 Huge Misfire?  Cult Sci-Fi Madness?  Work of unrecognized Genius?  Southland Tales could be all those things and none of those things.  Arrow Video’s new Blu-Ray Edition allows you to decide with both the Theatrical and Cannes Cuts of the film.

Richard Kelly cannot be blames for not swinging for the fences.  Southland Tales is a go big or go home proposition.  You will either get on this train or jump off.

At its core, Southland Tales is an apocalyptic sci-fi story that’s as much Phillip K Dick as it is Warren Ellis and all Richard Kelly.  Much like Donnie Darko, Kelly has sculpted a film about Prophets, False Gods, Conversative and Liberal ideals, an Election that plays out not in the background but in the forefront.  There are so many plot threads and characters in this rambling Sci-Fi epic that Kelly created graphic novels to set up the back story.

That is part of the issue, especially in the theatrical cut of this film.  The prime story should always be in a film.  Not some sort of appendix like homework.  A film lives or dies from the moment the film begins and it ends.  This is where Umbridge is taken in the theatrical cut.  The allusions to other material are much more liberally stated in the theatrical. Whereas the Cannes Cut backstory is made to feel like ephemera that one can fill in on their own.

Kelly’s theatrical cut makes things implicit that do not require or never should have been made implicit.  Though not enough to complete the story threads.  Much of this material is in the political machinations at work during the 2008 election (the movie was made prior to that and is a near-future film) is where the film begins to unravel giving us a sloppy narrative.  Yes, one that’s filled in if you “read the graphic novel”.  That kind of storytelling through inventive in some respects flat-out does not work in the case of the Theatrical Cut of Southland Tales.

Cutting the Southland Tales to 2 hours 25 minutes from its 2 hours 40 min runtime hurt it.  The film just doesn’t strip away 15 minutes from the run time.  The film’s narrative is reordered.  Narration is added.  Graphics as though you were watching CNN are added.  All of which feels like for the sake of “saving the film” or giving clarity.  By giving clarity and stripping some of its mystery and idiosyncratic storytelling created a film with more questions.  Not good questions but the ones that have you unraveling the film before the end credits are halfway through.

The Cannes Cut is a different beast altogether.  Having pulled back on the “CGI Interface” Narrator conventions to nothing benefits the film.  The Cannes Cut is more akin to a David Lynch vibe.  One where the film veers in and out of narrative plot threads of cataclysmic doom and human follies.  The film is purposely dense.  The kind of wall of sound that allows one to pick up things during multiple views.  Where the details are allowed to wash over you during the first viewing and upon rewatch allows you to dig.

There is a difference between purpose and residual which is ultimately the biggest difference in the two cuts of the film.  The Cannes Cut though as mysterious and impenetrable as it is, this Southland Tales is designed as such.  The Theatrical Cut with its attempts at narrative exposition leaves one frustrated as those attempts at clarity only leave one baffled. After seeing both one can clearly the theatrical cut was intended to make the film more commercial for those expecting a film “starring the Rock”.  What Kelly was left with was a film that failed itself and what it really was.

The Cannes Cut restores the austerity of weirdness and idiosyncratic melding of religion, science fiction, politics in a Bush-era post-9/11 paranoia.  Regardless of what one thinks of this cut, it feels pure and directly from the mind of Richard Kelly.

New 2K restoration by Arrow Films, approved by director Richard Kelly and director of photography Steven Poster puts Southland Tales’ best foot forward in both versions.  Much like the work done by Arrow on their amazing Donnie Darko set, this image far exceeds its original Blu-Ray release.  The time and care that Arrow has put into the transfers shows with the resulting work are beautiful strong sharp images with good contrast levels and color reproduction.

The audio commentary by writer/director Richard Kelly was recorded in 2008.  Kelly spends most of the time dissecting the labyrinthine story he’s created over one movie and two graphic novels.  There is a lot of discussion and exploration of the sci-fi conventions, alternate universes, the political leans in the film, the complex machinations going on, and more.  Kelly definitely gives you more information about the story and his references also briefly discussing production, actors, and more.  It’s a decent track but one would have loved Kelly to have been wrangled for an updated commentary track with the hindsight of more than a decade of reflection.

USIDent TV: Surveilling the Southland (33:48) – this archival making-of featurette is a great look at the making of the film.  Lots of B-Roll Footage from on-set not just EPK style interviews but looks at various points of interest like chopping off of a character’s hand, running over a character’s hand, the in’s and out’s of the production, the great Wallace Shawn explaining the story and his character, comments by the late-great Zelda Rubinstein, the production of the musical number.  It’s a solid featurette with some great looks at the making of this ambitious production.  Featuring interviews with Kelly, Actors Dewayne Johnson, Sarah Michelle Geller, Sean William Scott, Justin Timberlake, Wallace Shawn, Zelda Rubinstein, Wood Harris (in his makeup, which is awesome), Will Sasso, Lou Taylor Pucci, Bia Ling, Todd Berger, producer Sean McKittrick, production designer Alec Hammond, Stunt Coordinator Tanoai Reed, and more.

This is the Way the World Ends (9:12) – this surreal animated short isn’t so much about answering questions that the film left but to imbue a mood.  The work gives off a very Phantom Planet vibe with sea creatures discussing how the world ended.

Rounding out the special features are a Theatrical Trailer (2:31)  and an Image Gallery – the gallery holds 145 production stills that can be played automatically (without any music).  The stills can also be navigated by using the Chapter Stop buttons on your remote.

If you’re a fan of Southland Tales this is a definite must-have.  For those more adventuresome this will be of interest for sure.