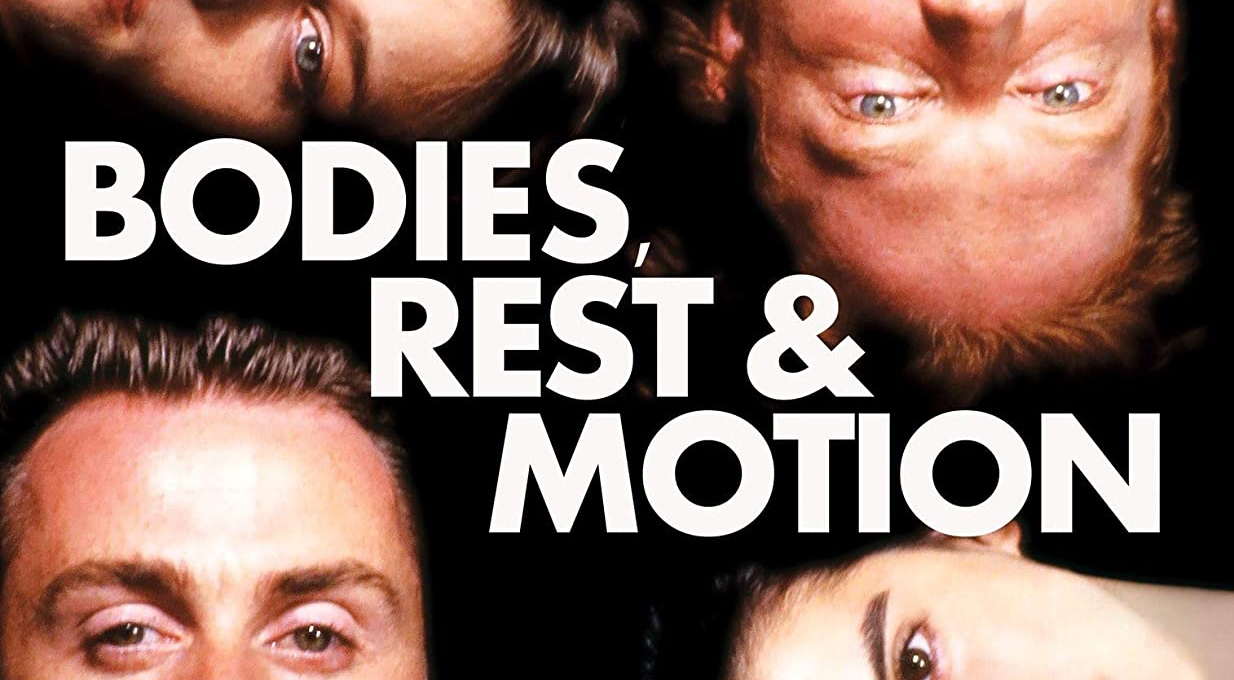 A beautiful character study set in the Southwest. Bodies, Rest and Motion is the kind of 90s Indie Drama we do not get enough of currently.

Set over two days four twentysomethings fumble towards various epiphany’s in their lives.  Beth (Bridget Fonda) is trying to cope with moving and her distant boyfriend.  Nick (Roth) Beth’s boyfriend is suffering from a malaise trying to solve it by leaving the sleepy Arizona town they’ve made their life in.  Sid (Eric Stoltz) is a painter who find the zen in his work and may have found love at first sight.  Carol (Phoebe Cates) is coming to grips with she may or may not be in love with her former roommate and ex-boyfriend… who happens to be Nick.

The silent brilliance of this study in the confusion of emotion and decisions of your twenties is thanks in large part to the adroit script by Roger Hedden.  Adapted from his play the chamber piece retains the wit and understanding that not everything is a sitcom.  Bodies, Rest and Motion understands that this is a slice in these people’s lives and nothing more.

There is a beauty in the way that Hedden’s script and Steinberg’s direction approach this.  There isn’t anything adorned or overtly stylish.  Rather they allow these characters to breathe and live.  While ensuring that though there may be no true narrative there is pointed observations made about youth.  Much of the pleasure of the piece is how unexpectedly the film veers away from the conventions of storytelling and rather allow things to play out with a verisimilitude that was rare then and even rare now.

Bodies, Rest and Motion is the sort of intelligent piece of drama that takes the cliched artifice of manufactured plot conventions out of the equation. What is left is an understated and delightfully knowing piece of Gen X cinema.

The transfer provided to Kino Lorber is beautiful but will be for specific home video enthusiast.  The work is very Film like and of the era.  It retains a lot of the grain structure to a grainy film.  The result is a beautiful patina that looks like a warm film print.  Many will love this film like presentation.  Those looking for something that’s been DNR’ed to death will not like this transfer.

The archival commentary by Director Michael Steinberg, Actor/Producer Eric Stoltz and Writer Roger Hedden is a solid one.  Each of the participants is recorded separately.  Steinberg opens with a discussion of the origins of Hedden’s script (which began as a play that Hedden didn’t finish), the characters and the score. Hedden begins with discussing place and how Arizona was chosen.  Stoltz begins his discussion (about ten minutes in) how he came on as an actor and producer.  Other details include the character’s history, how they worked together, the chemistry of the piece, the nature of an independent production from the director, actor and writer’s perspective, the causal use of marijuana, Tim Roth’s accent, a type of pre-viz they were doing with video cameras on set to help with production, shooting on location, the challenges of an independent production in the early 90’s, and more.

Introduction by Director Michael Steinberg (31:44) – this new video introduction by Steinberg is more of an interview.  Walking and talking to the apartment he had during the late 80’s that led to him meeting Roger Hadden and working with him. This relationship produced the script, that was actually based on his acclaimed play, how Sex, Lies, and Videotape influenced the not making of the film, how The Waterdance actually helped making this film with getting Steinberg his actors, filming in Arizona, and more.  Steinberg filmed this during the pandemic and does change locations of his interview a few times and additionally some great behind-the-scenes photos intercut.

Introduction by Screenwriter Roger Hadden (4:04) – this new video introduction by Hadden though not as verbose as Steinberg’s is just as good.  Also filmed during the Pandemic the screenwriter/playwright sits in his home as he discusses his side of the origins of the script which began as a play that was showcased at the Lincoln Center in New York.  Hadden does a great job of discussing the changes he made in his adaption.

Nightwatch (1985, 13 min.) – the short film written and directed by Steinberg is an all-together different type of film.  Shot in Black and White, the short tells the story of a Security Guard and a homeless man and an escalating situation.  The short is a fantastic atmosphere homage to The Twilight Zone.

Behind-the-Scenes Footage (6:51) – its literally b-roll footage from the location shoot.  No narration or interviews.  Just the raw footage of the cast and crew making the film. It’s great that Kino has been able to include this as it gives a bit of a glimpse into the production itself.

Featurette (6:02) – an vintage EPK about the film with interviews with Michael Steinberg, Hadden, Phoebe Cates, Tim Roth, Bridget Fonda and Stoltz discuss what the movie and the characters in it.

Kino Lorber has brought us an expected gift in Bodies, Rest and Motion.   Recommended.

Kino Lober’s Blu-Ray of Bodies, Rest and Motion is out now