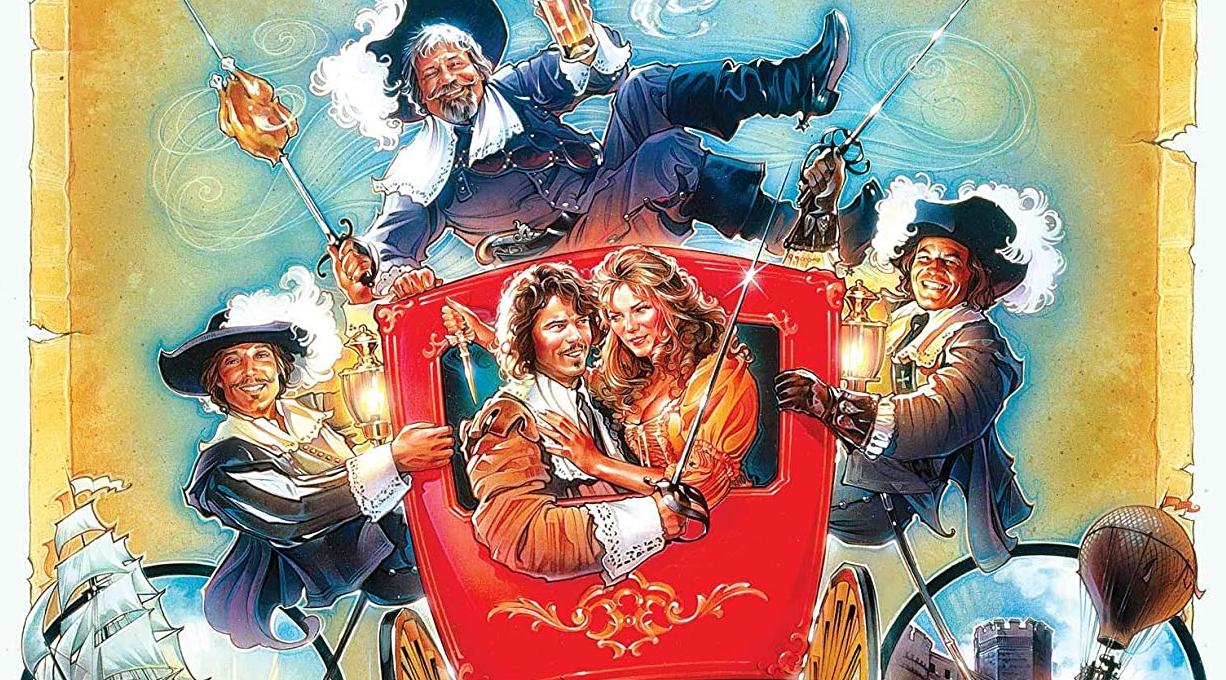 Richard Lester’s long in the tooth sequel to his The Three Musketeers/The Four Musketeers comes to Blu-Ray thanks to Kino Lorber.

Sometimes you get the wrong impression of a film.  I adore Lester’s one-two punch of The Three Musketeers and The Four Musketeers.  Having watched them at the time the 1993 Disney Adaptation of the same source material was released.  I have affection for the Stephen Herrick film.  Though my love for Lester’s films has only grown.  Seeing what Lester did and how perfectly suited he was for the films (think A Hard Day’s Night and Help! with Swords) is only more of an accomplishment.

This brings us to The Return of the Musketeers which I as much as I have for the original two did not see the finale.  The sequel having been made 15-years after the release of The Four Musketeers, at the time, was something that felt discouraging.  Of course, this was before these long-overdue sequels became a fashionable venture.  Having now seen the film it is as much a worthy entry as any long in the tooth sequel.  Maybe even more so…

The biggest issue is that the Four Musketeers are not in the film.  Well, Richard Chamberlain is but because of the on-set accident, and eventual passing from said accident of Roy Kinnear had the actor opting out of most of the film.  The film does suffer for it as Chamberlain’s chemistry with Oliver Reed, Michael York, and Frank Finlay is something that C. Thomas Howell can never fill.  The same for Kim Catrall who fills in for Faye Dunaway literally as her daughter. Cattrall’s vengeance filled Justine de Winter is solid but does not have the cunning and tongue-in-cheek style that Dunaway brought to the role.

Though it sounds like the film is filled with missed chanced (there are quite a few) but there are many charms to be sure.  Lester’s sense of staging and deft touch for comedy are still very much still as powerful as they were in the early 1970s.  In fact, the way the action is staged, the way the film’s narrative unfolds mirrors the first two films perfectly as to finish this trilogy stylistically almost perfectly.

The only crime is that Kino Lorber does not have the rights (YET!) to The Three Musketeers and The Four Musketeers. One will want to revisit them as soon as they finish The Return of the Musketeers.

Universal has provided Kino Lorber with a solid transfer.  Sourced from an early transfer no doubt the folks at Kino Lorber have given the film room to breathe.  The result is a handsome transfer that is sharp and filmlike.

The newly recorded commentary by critic Peter Tonguette begins with a nice ode to the 75th Anniversary Logo of Universal.  Tonguette discusses how the film did not get a theatrical release in the US (but outside the US it did), how it fits into Lester’s original two-part film, a praiseworthy review of the originals by Peter Bogdonovich, the on-set accident and death of Roy Kinnear, Kinnear’s career, Lester’s friendship and collaboration with Kinnear, Tonguette’s personal history with Lester’s filmography, Lester’s work on the Superman movies and connections to the producers, how Lester approached material specifically The Musketeers but also other films he made, Tonguette quotes Steven Soderberg, Charlton Heston, and others, Comparisons to the style of Altman, the work of cinematographer Bernard Lutic (replacement for original cinematographer David Watkin), the comedy, the action, the editing, how this is the final film of Lester’s and not the Paul McCartney’s concert film (which production is discussed), and much more.  Tonguette really gives us all the reasons why this is a worthy entry and to the series.

The Return of the Musketeers is an unexpected delight on Blu-Ray.  Recommended.