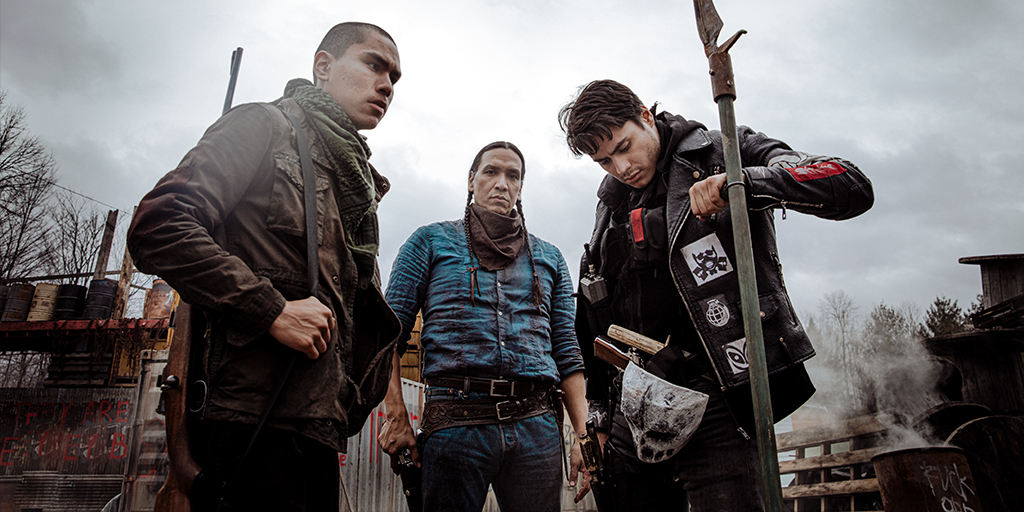 Writer/Director Jeff Barnaby’s nihilistic Zombie Film Blood Quantum is part Night of the Living Dead, part Cormac McCarthy’s Blood Meridian.  The horror film is a good a serious horror film in recent memory, this one lacerates to the bone.

As we deal with what is quickly turning into a new world with a new set of rules people invariably are not equipped for this change.  We have seen it recently in the News Reports of citizens doing outlandish things that defy their safety.  The adages of “people only do that in movies”, “people in horror films are stupid, that would never happen” are now a thing of the past.

Jeff Barnaby’s third feature film Blood Quantum shows us the darker side of humanity.  The film presents humanity as its darkest, and most foolish. Something that we can never turn away from and say “people only do that in the movies” as we now well see that people act exactly in the manner in which we had hoped they wouldn’t.  Making this all the more harrowing to watch considering the state of our world.

Like any good Zombie film, Blood Quantum is not about the Zombies (here called “Zeds”) but of the humans that are left in the apocalyptic wake and the human condition.  As an unexplained apocalypse hits the white citizen, the fish, and the cows of the North, the Tribes of the First Nation remain unaffected.  As we see throughout the film the sacrifices that Sheriff Traylor (Michael Greyeyes), his sons Joseph (Forrest Goodluck) and Lysol (Kiowa Gordon), and the citizen of Red Crow have had to make to survive are not without their scars.

Thought the film does shine some light on the good in humanity much of the scaring has left people in a dark place.  Those sacrifices come at the expense of humanity.  The film never shies away from the analogies of the Indigenous People of the America’s treatment at the hands of their White Invaders.  Like the aforementioned McCarthy Book, Blood Quantum deals with the human’s capacity for inhumanity and never flinches, and the silver of light within those darkest of deeds.

Many will want to stay away as the film’s unrelenting darkness can put even the most ardent of horror fans to the test.  Those that can, will be rewarded with a film that is remarkably powerful in its imagery, story, and execution.  The film’s trio of actors Greyeyes, Goodluck, and Gordon all give stellar performances.

Greyeyes as the patriarch saddles with not only troublesome sons but an entire city of people to protect is fantastic.  Traylor isn’t a hero but a worn-down man who’s just trying to make the best decisions he can.  Goodluck and Gordon are great as the siblings who are the light and dark.  What could have been a cliché of thematics with Joseph and Lysol at war not only ideologically but physically, feels human and the broken soul of the film.  It is both the young actor’s amazing work that gives this film its very complicated center.

Barnaby has made a nervy horror film.  Not only surface-level thrills and gore, though some amazing and utterly disgusting set pieces are sure to please horror fans, one that digs deeper for something more profound.  That darker soul that echoes through even the final frames, a risk that is our reward, as it lingers in the heart, mind, and soul well after the film has run its course. That is the power and danger of Blood Quantum.

Blood Quantum is currently available to stream on Shudder