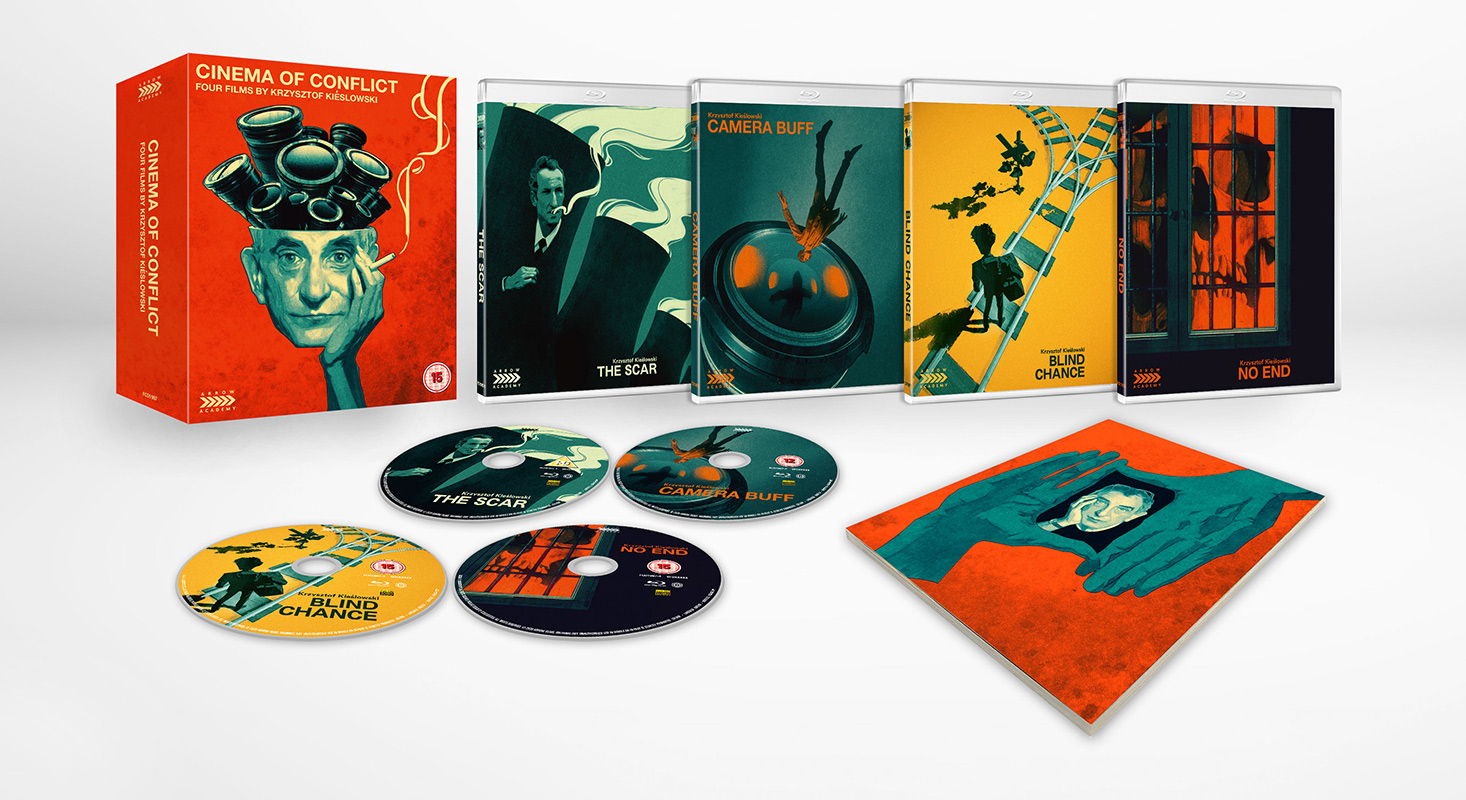 Arrow Academy have really come up trumps with this collection of early features from one of Poland’s most well-regarded directors, Krzysztof Kieślowski.

Some two decades before the Three Colours series of films, before The Double Life of Veronique, even before The Dekalog appeared, Krzysztof Kieślowski was metamorphosing from a documentary filmmaker into a writer and director of feature films in his native Poland.

This four-piece collection of these early features contains films created in the period from 1976 to 1984, a period of eight years in which Poland’s political and social landscape was beginning a very rocky road of transformation, attempting to unlink itself from the grasp of the Soviet Union, and which Kieślowski captures in shades of brown and grey. The thread throughout is of morality and the challenges of being an honest person in times of oppression.

The Scar (1976) is the earliest of these, and focusses on the building of a factory which creates more problems than it solves but which is mired in bureaucracy. It asks the question of how an honest, neutral man (Franciszek Pieczka) can or should act within the system operating in the country, and of which he is by default a part. Eagle-eyed viewers will spot a small role for Agnieszka Holland among the conscience-examining.

1979 brought perhaps the most autobiographical film of the group, Camera Buff, in which Filip (Kieślowski regular collaborator Jerzy Stuhr) starts out by making short documentary films on daily life and special events at his factory. When this hobby turns into something potentially more fruitful and creative, he begins to ask himself how much of the work is actually his, and who eventually has control over what he does.

Blind Chance (made in 1981 but only released in 1987 due to having been withheld from release by the Polish censor under martial law) is definitely the most intriguing. Examining choice, chance and perhaps even destiny, the film presents three possible outcomes to a single, seemingly banal event – a young medical student running to catch a train – and has a most striking ending. It also features a short fragment which remains unrestored following censorship, but the audio that accompanies is more than sufficient to let the audience understand what is happening.

The final offering is the only one which has a woman in the main role. No End (1984) is set in 1982, under the difficult period of martial law in Poland; and while the main story is about a woman grieving the loss of her husband, the linked story is also one of principles and moral fortitude.

Given the setting in which the films were created and filmed, they are far from heavy or hard work. Kieślowski moves time forward quickly with just a cut from one scene to another, and the viewer can easily spot that a period of time has passed. The characters may be principled, but no one is perfect, and even the antagonists have their pressures to deal with.

For anyone with only a passing (or no) knowledge of Polish politics at the time, Arrow Academy has accompanied each of the films with in-depth introductions by scholar and critic Michał Oleszczyk, who eloquently puts the film into context and explains some of the nuances which might be overlooked by non-Polish viewers.

I can’t speak highly enough of this collection; a fantastic series of films to watch and absorb, with excellent accompanying material to boot. Absolutely recommended.

Cinema of Conflict: Four Films by Krzysztof Kieślowski is available from Arrow Academy from 20th April 2020