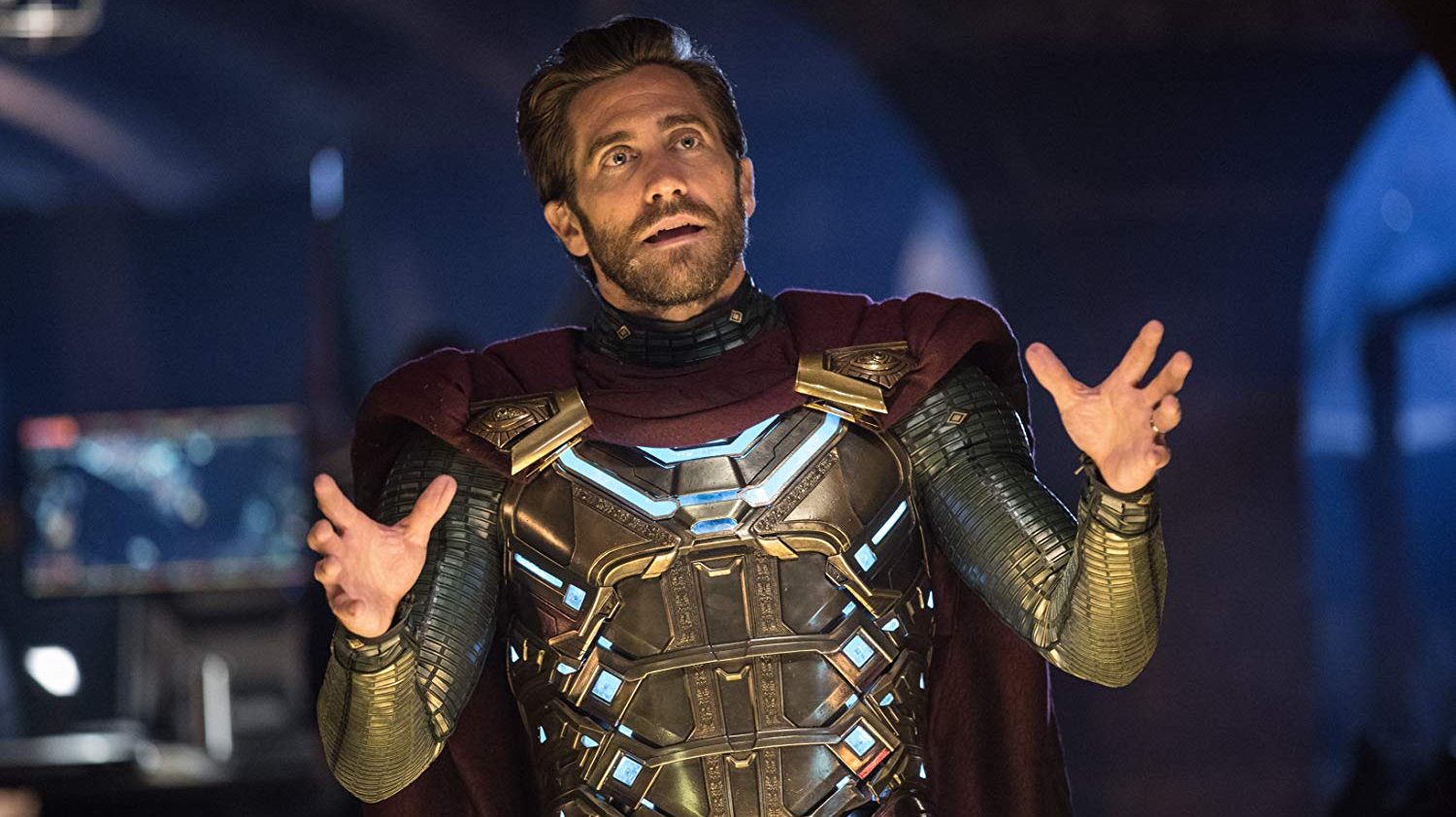 Marie takes a look at Jake Gyllenhaal in Spider-Man: Far From Home – but can’t do it without spoilers … consider yourself warned!

Jake Gyllenhaal does weird, edgy outsiders very well. As I mentioned in previous posts, you only have to look at films like Donnie Darko, Nocturnal Animals and Nightcrawler to get an idea.

And so when we first meet Gyllenhaal’s Quentin Beck, aka Mysterio, it’s no surprise that he’s also an outsider. Displaced from a completely different universe and on the hunt for Elementals who have caused such destruction on his own Earth, of course he’s going to be a little strange – he’s not from these parts.

Even so, my first impressions in the early part of Spider-Man: Far From Home were that Gyllenhaal’s performance was a little off. I couldn’t put my finger on it on first viewing, but it didn’t feel quite right, to the point where I was worried that Jake and the MCU were not a match made in heaven.

Given his short contact with Nick Fury (an also strangely out of sorts Samuel L Jackson) and Maria Hill (Cobie Smulders), Beck wanders around Fury’s latest lab with an air of authority that seems unearned, welcoming Peter Parker (Tom Holland) as if Peter hadn’t done this kind of thing before.

And then the (for me) most uncomfortable moment of the whole film arrived – Quentin Beck puts on the specially designed glasses and suddenly looks very much like Tony Stark. That’s when I realised: I’d been duped by the master of trickery (or the MCU, or probably both). The ‘slightly off’ performance was obviously deliberate. And what we see of Beck from then on is an opportunity for Gyllenhaal to showcase bits from his various characters so far.

We’re treated to the slick speeches of a person making a pitch and rousing the troops, reminiscent of Love & Other Drugs or even perhaps End of Watch. There’s the obsession of something like Zodiac or Enemy, and the downright weirdness of Okja or Velvet Buzzsaw. And then, when he feels like his plan may be falling apart, we get the angry yelling of the powerlessly arrogant Lou Bloom from Nightcrawler.

There are slices of everything in here, and once the opening trickery is uncovered and the audience is in on his game, Jake Gyllenhall as Quentin Beck turns out to be perfect casting. He has permission to go over the top and be bat-shit crazy, and also seethe angrily at the injustice of events. He can be a petulant loser and mad showman, and is even commenting on the trickery of all of these types of movies while dressed in a combat version of a mo-cap suit. It’s all very clever.

So where does Quentin Beck fit in to my list of favourite performances? Well let’s be honest, it was never going to be Oscar fodder. And there was only a teeny tiny chance that Gyllenhaal was going to be terrible. So while the performance is neither of the above, I think it’s exactly what it needs to be. It plays into the wacky weirdness that Gyllenhaal’s so good at, without the quirkiness which often puts me off.

The only gripe I had is that it was over so quickly – having just got to grips with the Wizard of Oz-ery of the visual tricks, it looks like that’s the end of Quentin Beck. Or is it …?

This concludes The Jake Effect … for now. Marie will bring this column back but at a later time. Stay Tuned and for now you can go back to and catch up!!!