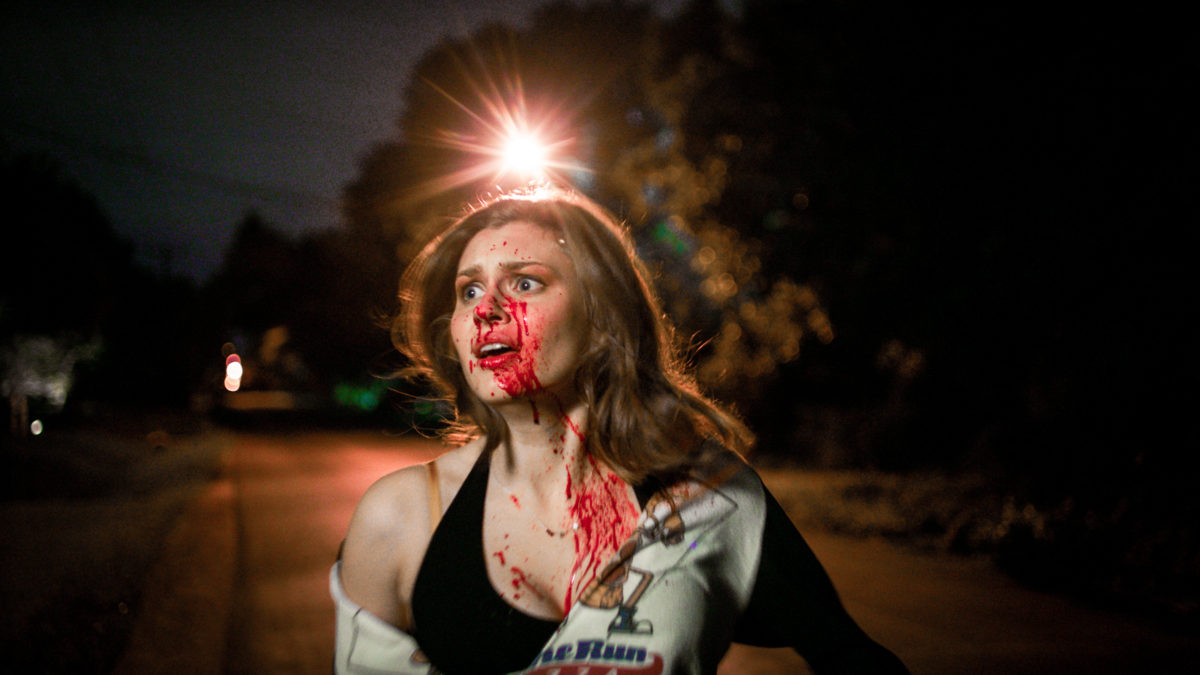 Horror Comedy is an Unexpected Treat

It’s ironic that Satanic Panic, the new film from director Chelsea Stardust (All That We Destroy), had its world premiere at the Overlook Film Festival in a 9:30 p.m. time slot because its cinematic DNA is 100% midnight horror movie. It’s a gonzo mash-up of body horror, witchcraft, occult sacrifices and young women in peril with a big streak of humor running through it that lets us know we shouldn’t take this film too seriously. The director herself called it “batshit crazy” during the post-screening Q&A. The film embraces that lunacy and confidently runs with it. If Satanic Panic had been released in the 1970’s, it would’ve been a staple on the drive-in theater circuit.

As the film opens, Sam (Hayley Griffith) is stuck in a dead end job as the low woman on the totem pole at a pizza delivery business. She covers the low-rent sections of town and can’t muster a twenty-five cent tip from her customers. So, when an order comes in from a posh neighborhood just outside of the pizzeria’s delivery area, Sam volunteers, hoping that a hundred dollar order will generate a nice gratuity.

When she gets stiffed on her tip by the high-end customer, Sam reaches her breaking point and enters the home to confront the cheapskate living in the mansion. However, Sam doesn’t know that the toney gathering of well-dressed WASPs is actually a coven meeting, and it’s the night of their big ceremony. When Danica (Rebecca Romijn), the leader of the coven, announces that their virgin for the ritual didn’t pan out as hoped, the audience knows where things are headed for poor Sam.

What follows has to be seen to be believed. And even then, you may not believe the places this film is willing to go. It’s this punk rock aesthetic that makes Satanic Panic such a pleasant surprise. As a veteran horror fan, I had no idea where this film was headed, so I just sat back and enjoyed the ride.

And “enjoyed” is an essential point. Satanic Panic is fun. Most of the horror films of the 2010’s forgot that some of us simply want to be entertained. If you need your horror films to be drenched in endless dread as you careen toward yet another nihilistic ending, then this film likely isn’t for you. (And, by the way, “Everybody dies” quit being a bold creative choice when The Strangers did it better than any film that’s been released since 2008.)

The women drive the narrative while the men are mostly superfluous. The screenplay by Grady Hendrix avoids the pitfalls that can come with female-female confrontations. These aren’t “cat fights” where women pull each other’s hair while the men try to separate them (the implication being the “hysterical” women are acting like children). Even the conflict between Danica and her peers in the coven is based in socio-economic competition and jealousy, not a gender-based conflict.

Newcomer Hayley Griffith anchors the film with a solid performance. She infuses the narrative with a sense of believability and keeps everything as grounded as it needs to be. A weaker actor could have sent the entire film spinning out of control. Satanic Panic has a unique tone, and it’s a challenge to maintain that feel for the entire runtime. Fortunately Ms. Griffith is up to the task.

Fangoria, the horror magazine that was revived last year, is the production company behind Satanic Panic. Publisher Dallas Sonnier has produced an excellent trio of modern pulp films by S. Craig Zahler (Bone Tomahawk, Brawl in Cell Block 99 and Dragged Across Concrete) and with Satanic Panic, he has confidently entered the genre for which his magazine is known. I hope the company is able to give the film a decent rollout. It deserves to be seen.