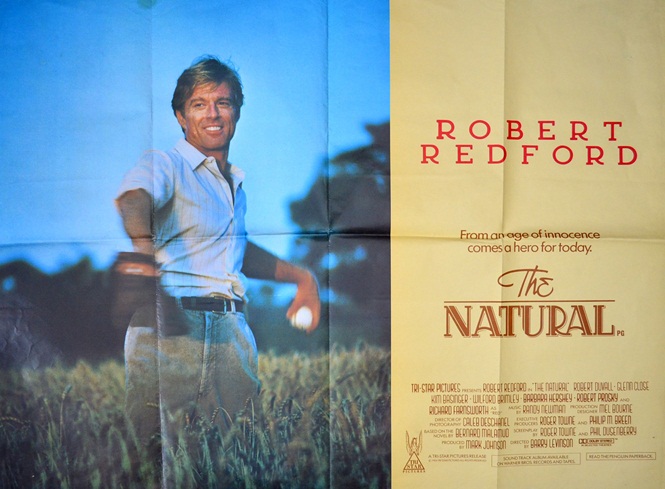 It’s spring time… That means its the beginning of Baseball Season. Just in time for the MLB ramp up, The Revamp is back! This month Olivia is taking on one of the vaunted Classics; The Natural.

It is the magical time of the year, dear readers of The Revamp. That’s right, the boys of summer are back: Major League Baseball has begun!

For those who know me well, when the first week of April strolls in, it is not April Fools Day that comes to mind. Instead, it is a sign that nights spent on the back porch with my family, listening to the radio broadcast the score from the corner of Carnegie and Ontario, while the sun sets in the sky are nearing. Regardless of what team is coming from the boombox, there are millions of fans who enjoy the same kind of evening.

This month’s column will reflect the ‘reason for the season’, as we take another look at Barry Levinson’s 1984 The Natural, starring Robert Redford and Glenn Close.  When an unknown comes out of nowhere and becomes a divine and legendary, talented player, our protagonist finds his worth and talent is not in his bat, but in his heart.

Although the film had a safe 7.5 on IMDb, it was met with mixed and unfavorable reviews from critics. Roger Ebert wrote,  “Why did a perfectly good story, filled with interesting people, have to be made into one man’s ascension to the godlike, especially when no effort is made to give that ascension meaning?”

Side Note: To add to Ebert’s comment, this contributor found the film’s subtext was about how men are valued for their sexual performance, and scoring the game-winning run at home plate.

So how could one successfully sell this film nearly thirty-five years later? With a touch of divine intervention, in addition to a good eye on the part of the casting director and studio, here are some suggestions to take this ‘so-so’ film and make it a grand slam.

Or at least a solid line drive to left.