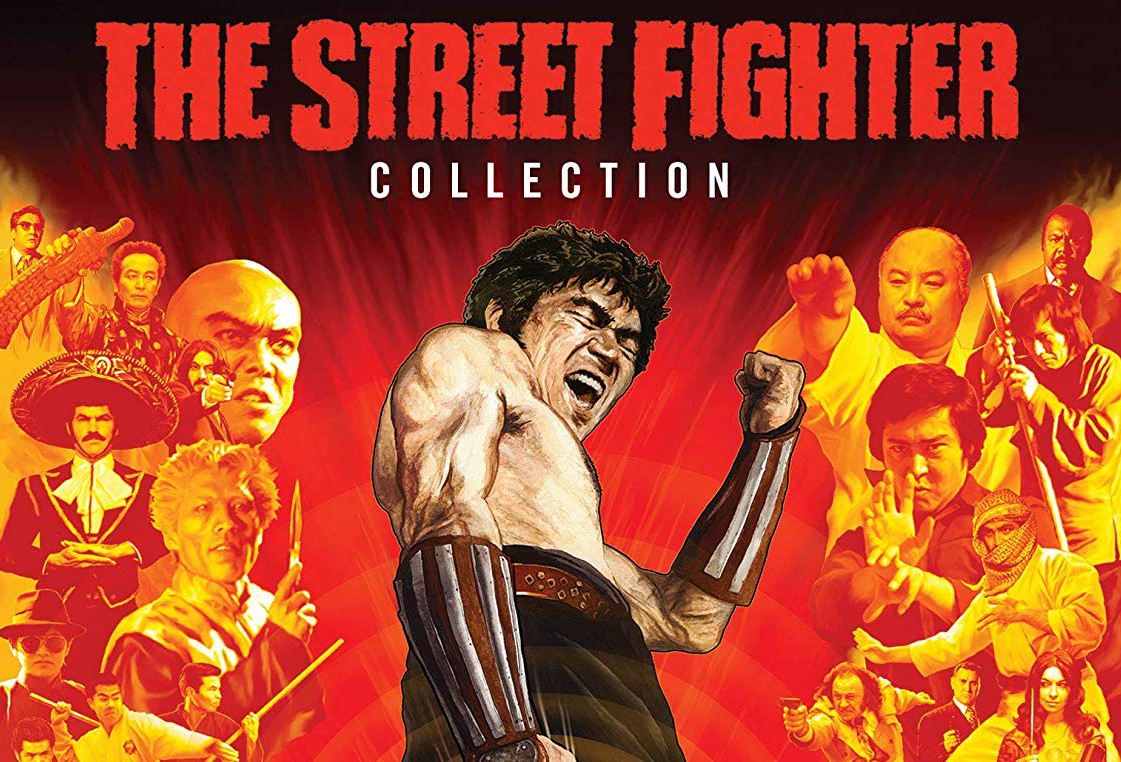 Adam takes a look at the kick-assery that is Sonny Chiba in the Street Fighter Collection. Shout Factory has amassed the original trilogy on Blu-Ray in a beautiful collection.

Before we begin to talk about the individual films lets talk about Sonny Chiba. Chiba to me personally. In my household few names held with such high regard as Chiba. There was Chiba, David Carradine, Toshiro Mifune, Lee Marvin, Steve McQueen, Terrence Hill, and Bud Spencer. That’s it. Chiba was always atop that list because he was Japanese. My grandfather loved cheap Samurai and Martial Arts flicks. Chiba made those very kinds of movies, along with some great Procedurals and Yakuza films. It’s to say I am in the bag for anything starring Sonny Chiba. Especially, if it has the words “street” and “fighter” in the title.

Takuma Tsurugi (Chiba) is your average one man mission impossible team. Hire him to do any task that requires brute force. But pay him. If you don’t, the consequences are swift and severe. Tsurugi is hired for a series of jobs that eventually involve “The Mafia” and their wanting to control certain interests, specifically a recently inherited Oil company. Double and triple crosses abound and little if any honor amongst criminals leave Tsurguri no choice but to as the saying goes, “FUCK UP SOME MOTHER FUCKERS!”

Director Shigehiro Ozawa makes a lean and very mean piece of action cinema. The film puts Tsurugi in all manner of bad situations and gleefully displays the carnage use to get out. There is not a piece of gore or arterial spray that is stylishly shot for maximum effect. Ozawa and cinematographer Ken Tsukakoshi give Chiba a wide berth to allow the star to be the magnetic force he is. Chiba eats it up, giving us a performance that is more physicality than emotion. Tsuguri like Yojimbo before him runs things by his own code of conduct. Much of the fun and crazier aspects of the film comes from that code and Tsuguri’s dispensing his brand of justice. Be it castrating a rapist, or ripping out the throat of a rival, rest assure you have never seen a Martial Arts film quite like The Street Fighter.

Return of the Street Fighter

Tsuguri is back and more badass than ever. Hired by “The Mafia” to investigate a stolen Buhda. Of course, this turns out to be more than Tsuguri bargained for. Plots against other mob bosses, revenge against Tsuguri, and Tsuguri’s own past all play a part of this surprisingly convoluted film. Though, it does end like each film does in a Monsoon style rain shower face off.

Much of the fun of this entry is derived from the transition Chiba’s Tsuguri has made from badass asshole assassin to badass not-so-asshole-ish badass assasin. One can see his not-so-subtle arc here the clearest as the middle film does represent the change in Tsuguri. For a film light on plot it is heavy on character. Not just Chiba’s Tsuguri but the other cast of Supporting characters like Masafumi Suzuki’s kendo Masaoka or Masashi Ishibashi’s Tateki Shikenbaru both get more complexities and shadings to their characters than is usual in Even the best martial Arts films. Shigehiro Ozawa returns as director to bring that specific style he brought to the previous film. Those in love with Carpenter’s Big Trouble in Little Chinawill no doubt see where the Horror master lifted specific dynamics from.

In the third and final part of The Street Fighter trilogy, we’ve gone from a lean and mean Martial Arts thriller to Full blown James Bond style Action bonanza. Tsuguri has gone from anti-hero Assassin to full-on Mission Impossible Army of One. Tasked with stealing a recording that will tip the balance of power in Japan. Tsuguri makes a decision that causes ripple effect through all the mafia families and Organizations. The families send everyone after our hero. And we do me an e-v-e-r-y-o-n-e, in the Gary Oldman sense of the word.

This is the type of movie that takes it one-ups-manship to another level. Shigehiro Ozawa ratchets up the lunacy up to the “Spinal Tap” 11. American telekinetics wearing Sombreros, Female Chinese Red Army Assassins, and more show up to take down Tsuguri. Ozawa never blinks an eye when introducing these cast of Mortal Kombat characters. This may be the nuttiest of the three, but it stands as the most stylish. Ozawa and crew find their beat in this last entry finding a balance of Arched and serious that blends perfectly. It’s an almost perfect way to end this trilogy.

Bless Shout Factory and New Line Cinema in getting these transfers in order.  I can only imagine the nightmare it was to put these together.  The film prints that these transferred were culled from were not in the best of shape, compounded by the fact that they were shot cheaply and quickly.  This equals decent transfers with more contrast and detail coming through than ever before.  If one is looking for a full restoration will be sadly disappointed.  With that being said the three films are the best they’ve ever looked on Home Video.  The image for those that have had to deal with the troublesome previous iterations of these films will revel and delight in how these films now look.

Street Fighting Man an interview with Sonny Chiba is a 27-minute interview with the legend. The interview begins with Chiba discussing the release of possibly his most influential movies. Chiba recounts his beginnings as an Olympic Gymnast and how an injury turned him to acting. The interview goes all over the place from Chiba ‘s view on Budo, Karate, and some info about Bruce Lee, his reluctance to do The Street Fighter. His hatred of the violence of the series and his eventual turn from anti-hero to hero over the course of the series.  The now-famous “Ibuki” which is the breathing technique. His friendship with Jackie Chan (who was a huge fan of Chiba’s work). How he influenced The Sister Street Fighter series. Of course, his friendship with Quentin Tarantino and True Romance’s influence on people seeing The Street Fighter.

Cutting Moments The Street Fighter trailer and other tales from the Edit Room is a 13-minute interview with filmmaker Jack Sholder. The Hiddendirector begins with a crazy story of being a saxophone player to wanting to write to taking LSD to falling into being an Editor to being hired on as a trailer cutter by Bob Shaye himself (the Head of New Line Cinema) at the burgeoning Studio. Sholder does a great job discussing how trailers were built back in the 70s.  Additionally, he discusses albeit too briefly his career as a director.

Rounding out the special features are the US and Japanese trailers for each of the three films, and a still gallery for each film.  I would highly recommend anyone who loves these films or Japanese cinema in general check out these features including the still galleries.  Each of the still galleries are filled with rare behind-the-scenes photographs of Chiba and Co. making the film and some great poster and lobby art.  The trailers are just as much fun as the films if not more so.

The Street Fighter Collection is essential viewing and ownership for anyone that loves Japanese genre cinema or Martial Arts films.  Shout Select has treated these films with respect and class. HIGHEST POSSIBLE RECOMMENDATIONS!!!!