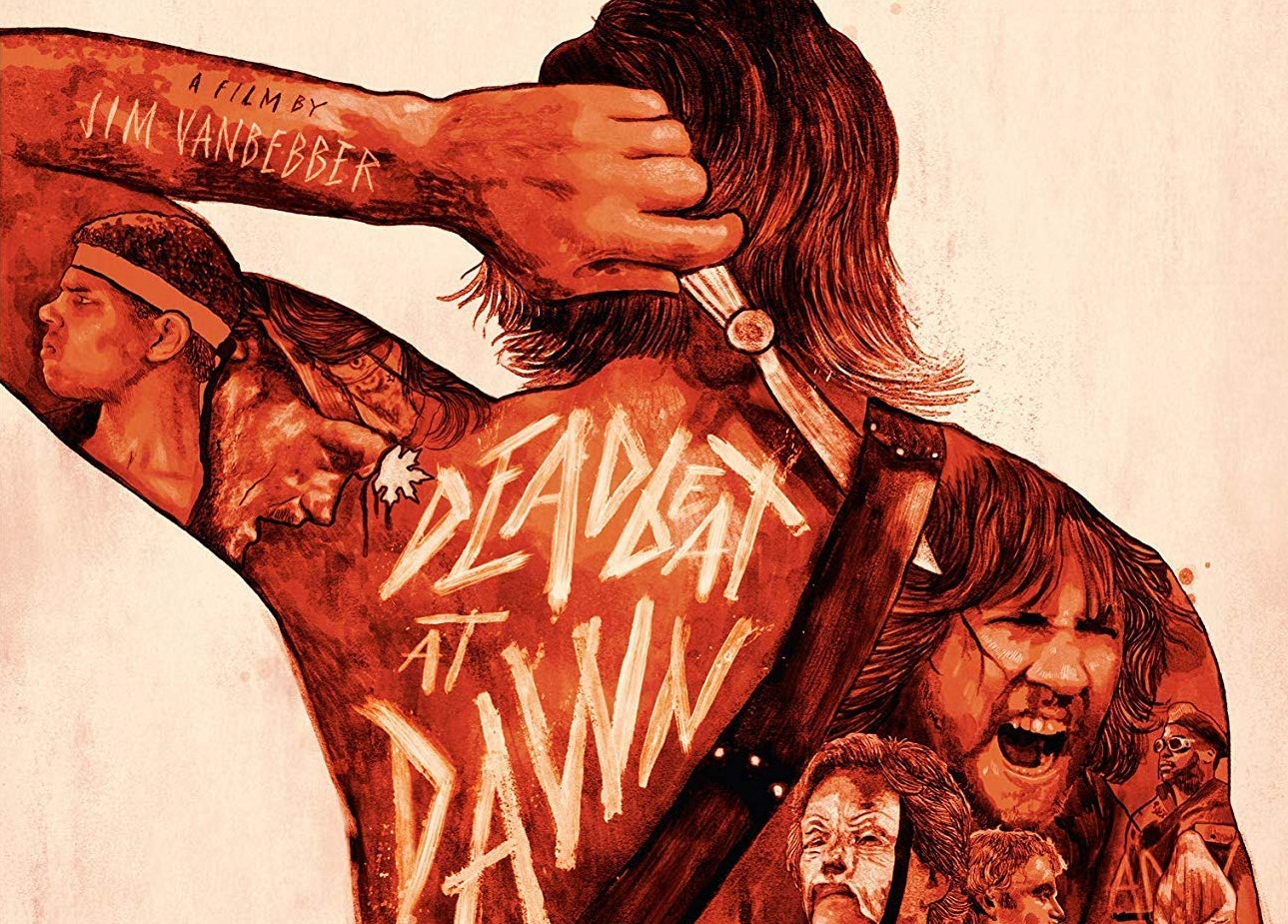 Adam is in love with the Gutter Punk Action Epic Deadbeat at Dawn.  New on Blu-Ray from Arrow Video armed with a revelatory 2K Transfer and a wealth of extras.

Some low budget debut features are known more for the attempt and the rough genius in the making, like Schlock.  Others are out of the gate brilliant Raimi’s The Evil Dead, Rodriguez’s El Mariachi. Then there are the ones in between.  This is where Deadbeat at Dawn makes is stake.  Part of the Gang movies that The Warriors, Class of 1999, 1990: The Bronx Warriors take up.

A film is so raw it eschews everything in the genre it is telling its story. Deadbeat at Dawn is that type of film. A DIY miracle of action filmmaking, the film closely resembles both The Warriors and The Evil Dead-in equal measure. Though watching either of those films will not prepare you for the Gutter-Punk aesthetic director Jim Van Bebber imbues every frame with.

Two warring gangs; The Ravens and The Spiders are at war. In the midst of this war, and a heavy loss Paul (Paul Harper) the leader of the Ravens decides to quit the life. Paul just wants time with his girl. The Spiders ensure this will never happen. Paul must fight, claw and gruesomely murder everyone in his sight to survive and exact revenge on those that double and triple crossed him.

There isn’t appropriate verbiage to describe just how kick-ass B-Movie awesome Deadbeat at Dawn is. This is the kind of film that you pass to all your friends until everyone is quoting it religiously. Van Bebber understands that ultra-violence is not something you pepper a film with but a wellspring to geyser arterial spray across the screen. Like Raimi of this era, Van Bebber is a showman.  The P-T. Barnum of gutter punk gangland action films.

Ones who are fans of movies like 1990: The Bronx Warriors, The Warriors, and other gang films will fall in love with this forgotten cult entry. Give Deadbeat at Dawn a chance and you won’t be disappointed. The only disappointment will be that Van Bebber and Co. never made a sequel to this highly enjoyable actioner.

Brand new 2K restoration from original film elements supervised and approved by writer-director Jim Van Bebber is nothing short of a minor miracle.  Researching and sampling the other home video iterations are outright disrespectful and shameful.

The Audio Commentary is as entertaining a group commentary as I’ve listened to in a while.  Now, it does not rival The Cannibal: The Musical commentary but it is a fun listen.

Jim Van Bebber, Deadbeat Forever! is a comprehensive 70-minute making-of documentary.  The doc covers most of VanBebber’s career and the making of Deadbeat by Dawn.  Featuring cast and crew interviews from just about everyone that is still alive, this feature is as entertaining as the film.

The Outtakes amount to about 3-minutes of footage that doesn’t add anything to the proceedings as much as gives an idea of what Van Bebber and Co. shot for the film.

The four short films by Van Bebber have not only been restored feature commentary on each.  Into the Black (1983, 34 mins), My Sweet Satan (1993, 19 mins), Roadkill: The Last Days of John Martin (1994, 14 mins) and Gator Green (2013, 16 mins).  All of them show the promise and similar attitude that Van Bebber’s work in Deadbeat at Dawn. If you are into the gutter punk DIY aesthetic you’ll love these shorts.

Jim Van Bebber Music Video Collection is a series of four music videos directed by VanBebber.  Speaking of gutter punk DIY culture the collection includes videos by Pantera, Damien Storm, and two by Superjoint.  All not ready for MTV (when they played Videos) and all had pretty steady rotation on Headbanger’s Ball.  Those that loved those videos will instantly know these.

Chunkblower is a 4-minute promotional trailer for an unfinished Gary Blair Smith-produced gore-soaked feature film.  The trailer gives you more of an indication of what could have been another great feature film.

Rounding out the special features is what Arrow is calling an “Extensive” Image Gallery.  To their word the Gallery is.  With well over 500 stills from the various projects that Van Bebber has produced.

Deadbeat at Dawn is legit kick you in the seat of the pant awesomeness.  Arrow Video has pulled out all the stops for this DIY marvel.  Highest Possible Recommendations!!!