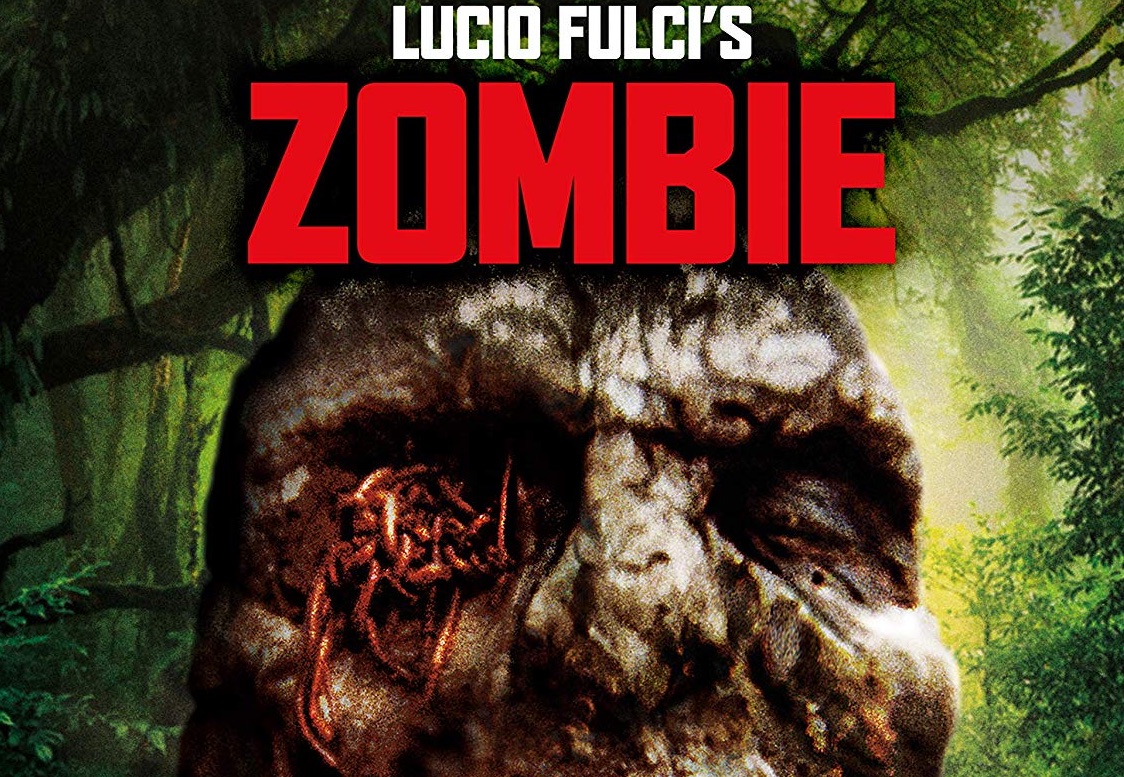 Adam heads into the dream logic world of Lucio Fulci with his Horror Classic Zombie (aka Zombi 2aka Zombie Flesh Eaters). Blue Underground has outdone themselves with a Perfect 4K restoration and a wealth of extras.

Lucio Fulci films are a take it or leave it proposition.  More than any other filmmaker, Italian Genre or not, Fulci seems to divide film fans and horror fans in equal measure.  Zombie and the many names the film goes by is as bonkers a film as it was the day it was released.  In 40 years, the film has lost none of its quirky ability to shock and inspire.

To even attempt to discuss this plot is really futile as the plot doesn’t matter.  It plays out like some nightmare.  A ship floats into New York Harbor containing a Zombie and little clue as to where the owner, a renowned scientist Dr. Bowles.  Soon his daughter Anne (Tisa Farrow) and reporter Peter West (Ian McCulloch) are on the trail of the doctor.  This leads them to Matul an island in the Caribbean.  No sooner than you can say Voodoo than the dead begin to rise from the grave.

One does not watch a Fulci film for its story and character development.  You watch it for the set pieces, the gore, the dream logic, the ridiculousness and the pure bliss of that entire package being rolled into a beautifully shot atmospheric picture.  Here you have so many iconic images that you’d find it hard to believe they all came from the same film.  Of course, the most infamous of them all is the Shark vs. Zombie set piece.  Almost running a close second is the Splinter in the Eye set piece.  Both in context work wonderfully in the picture and are the kind of WTF moments that Fulci perfected but was never as good as they were here.

It’s almost impossible to not recommend Zombie as much as its almost impossible to recommend it.  If one is an adventurous Cineaste, you may have already seen it.  If not, please do yourself a favor and view this at your earliest possible convenience.  Good, bad, indifferent this Zombie is must see, can’t miss, cinematic bliss.  One need only give it a try to see if it works for you.

This new 4K Transfer from the original Negative is nothing short of perfect.  Blue Underground has taken its time ensuring this remaster exceeded their 2K Transfer from 2011.  Any of the slight imperfections of that transfer are gone.  What you are left with is an impressive image, razor-sharp, and nary a blemish or scratch apparent.  Any fan of this film will be brought to tears at the verbose image quality that this 4K scan has produced.

The two commentaries included are both great listens.  The new commentary features Fulci expert, critic, and author Troy Howarth.  The commentary covers not only the making of Zombie but does an excellent job of giving us a context in regard to Fulci’s career and critical context.  The second is an archival commentary from their 2011 release that features star McCulloch and critic Jason Slater.  McCulloch and Slater are great as Slater moderates this lively discussion with the Knighted Actor, who is game to talk about the making of and his history with the film.

When The Earth Spits Out The Dead is a new 33-minute interview with critic and Fulci scholar Stephen Thrower.  This interview Thrower gives us an in-depth discussion on Fulci at the point he took Zombie on as director.  Thrower is able to give us context, and the history of the production along with how this shaped the director’s career after it became a Box Office hit worldwide.

Theatrical Trailers, TV Spots and Radio Spots amounts to about 10-minutes worth of material.  Trailer fans should note that Blue Underground has remastered both the International and US trailers.  These should not be missed!!!

The Poster and Still Gallery is approximately 11-minutes long and features all kinds of goodies like Old VHS covers, Alternate Posters, to make any fan of the film a bit dizzy.

Rounding out the first disc is a 2-minute long Guillermo del Toro Introduction that is played either with the film or by itself.  I will let GDT do the talking so you’ll have to purchase this release to know what exactly the Master says about another Master and his seminal work.

Zombie Wasteland is a 23-minute archival collection of interviews with Ian McCulloch, Richard Johnson & Al Cliver, and Actor/Stuntman Ottaviano Dell’Acqua.  Filmed at and during a Horror Con in Ohio, the interviews discuss all things Zombie and the phenomenon that its become.

Flesh Eaters on Film is a 10-minute archival interview with Co-Producer Fabrizio De Angelis who gives some of the best tidbits about the production and how the film came to be.  De Angelis discusses among other things how Fulci wasn’t the first choice as director, how they were sued by Dario Argento and more.

Deadtime Stories is a 16-minute archival interview with Co-Writers Elisa Briganti and uncredited screenwriter Dardano Sacchetti as they discuss the evolution of the screenplay and Fulci’s contribution to the screenplay itself.

World of the Dead is a 17-minute archival interview with Cinematographer Sergio Salvati and Production & Costume Designer Walter Patriarca.  Both Salvati and Patriarca discuss in detail the challenges of a lower budget production and working with the cantankerous director.

Zombi Italiano is a 17-minute archival interview with Make-Up FX team Gianetto De Rossi, Maurizio Trani, and Gino De Rossi.  This interview is the best of the bunch as the group goings into detail about the most iconic of effects of the film.

Notes on a Headstone is an 8-minute archival interview with Composer Fabio Frizzi who discusses his synth-based and ultimately very odd score. Frizzi discusses his inspirations for the iconic score.

All in the Family is a 15-minute interview with Fulci’s daughter Antonella Fulci.  She recalls her father and memories of her father onset giving a different but honest picture of a man who at moments was domineering, to say the least.

Zombie Lover is a 10-minute interview with Filmmaker Guillermo del Toro as he raps rhapsodic about his favorite Fulci Film; Zombie.

The CD Soundtrack is about 30-minutes of music over 9-tracks.  After seeing the movie, one will want to listen to this score.  It’s a great added bonus that Blue Underground has included.

Blue Underground has outdone themselves with this beautiful new edition of Zombie. Stacked with extras, a Soundtrack CD, a beautiful new 4K Scan, this should be at the top of any Horror Geek’s Christmas List.  HIGHEST POSSIBLE RECOMMENDATIONS!!!