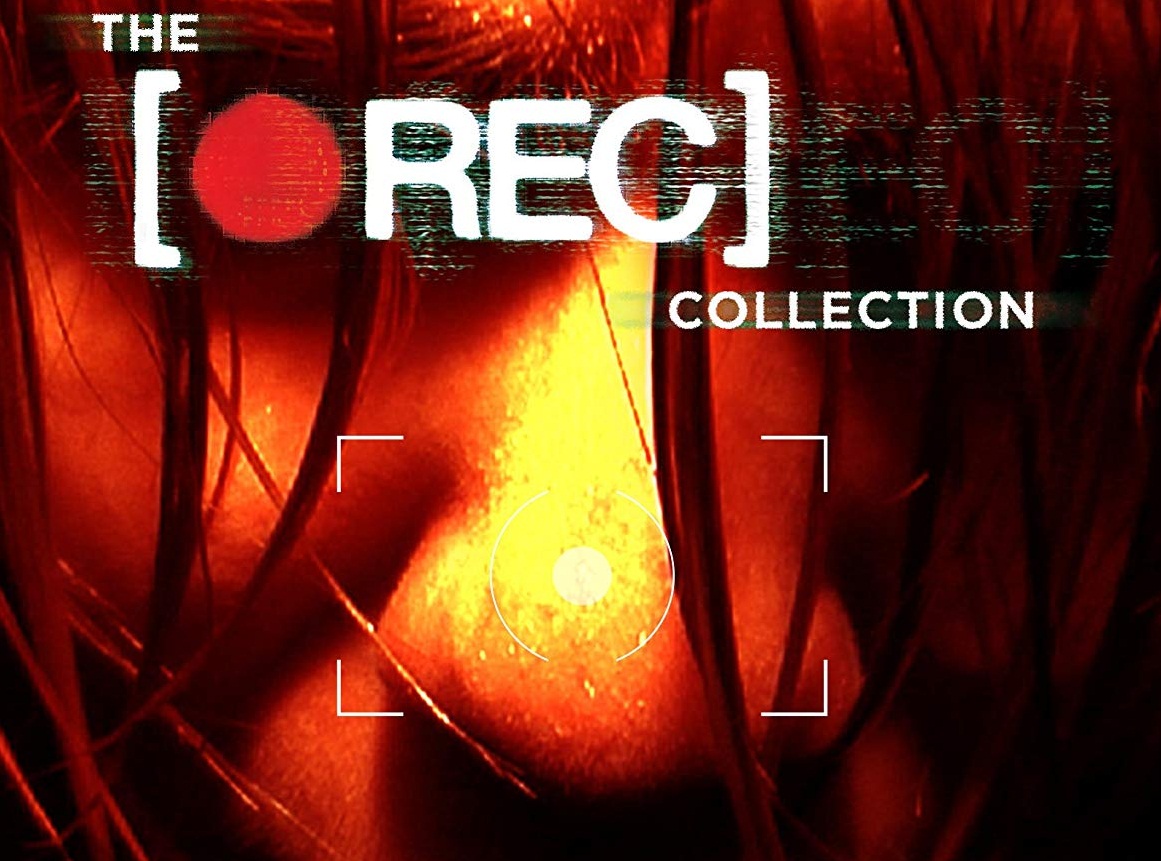 Scream Factory goes overboard with one of the best Box Sets of the year for the amazing Spanish Zombie Film Series [REC].

What Writers/Directors Jaume Balagueró and Paco Plaza manage to create is nothing short of a miracle in filmmaking.  In 2007 both Found Footage and Zombies had pretty much become exhausted in the world of film. By stripping down both the Found Footage aesthetic (yes, it’s not a genre people, stop calling it that) and the Zombie subgenre to its barest essentials they found something truly special.  We follow Ángela Vidal (Manuela Velasco) a special interest reporter on a routine visit (re boring) to a firehouse to cover them for an episode of her show While You Were Sleeping.  There is nothing routine about the call the Two Man Team takes as they quickly find out.  Balagueró and Plaza as writer and directors know that the scariest element in any horror film is the unknown.  The unknown is not just the how’s and why’s of this event but simply what is in the next room or a darkened hallway.  The film creates a sense of unease that at any moment something may attack… and they do.  Running at a lean and mean 75 minutes this film wastes no time, efficiently setting up, building character and story, and most importantly scare the ever living shit out of you.  [REC] is the real deal, a truly great Horror Film.

The Aliens of the [REC] series, [REC] 2 is the perfect model of how you create a sequel.  Balagueró and Plaza integrate every piece of Mythology, Theology, and character so perfectly you would have thought they had planned out this series to a tee.  Taking place (literally) a few minutes after the ending of the first film, we follow a SWAT Team and Dr. Owen (Jonathan Mellor) into the same apartment building that Ángela Vidal and the Fire Fighters entered never to return.  [REC] 2 manages to jump subgenres so easily into a taut action horror film in the vein of that subgenre’s best (Aliens, Blade II, Predator) its almost scary in it of itself.  Balagueró and Plaza are experts at the balancing act of horror and action keeping both genres (and their fans) happy through the film’s 85 minutes run time.  Part of what makes this series so special, and specifically this sequel, is in the way that it expands the mythos way beyond normal Zombies to something … beyond the Zombie Subgenre.  Taking the tagline from arguably the best Zombie Movie (e.g. Dawn of the Dead, the 1978 one just to be clear), When there’s no more room in Hell, the Dead will Rise, to its logical conclusion.  Balagueró and Plaza make some bold choices that pay off in the best way being able to merge even another subgenre so easily into the storytelling fold (which we cannot ruin as it’s too delicious).

The film that many I have seen complain about because again Balagueró and Plaza have veered into another subgenre.  Rather than both directing the film Paco Plaza took over directing duties for the film which is obsessively a prequel as it takes place a few hours prior to the [REC]. The film rather than running deeper into the mythology and show us a governmental conspiracy they begin at a wedding.  The wedding of Clara (Leticia Dolera) and Koldo (Diego Martin) who are not scientists or connected to the Apartment Building outbreak in any way.  The film’s boldest move is using the Found Footage aesthetic for the opening act and throwing it out for traditional filmmaking. By Plaza, literally, smashing the Digital Cameras at the end of the first act, he’s announced the changing of the guard so to speak.  The veering into a Romantic Comedy by way of Horror, Plaza cements this series as one of the most interesting in horrordom.  There are only tangential ties to the first two that Plaza is sure to make but his story of a couple that loves each other and only wants to be reunited is the core of the film.  Clara and Koldo may be one of the best Romantic Comedy duos in the last decade and they are found in a Horror film that does not flinch at showing copious amounts of gore.  [REC] 3: GENESIS is a great and bold entry into a series that had managed to already be bold in its storytelling.

The last in the series is a return to Ángela Vidal’s story and by default the primary story and mythology of [REC] series.  Balagueró and Plaza have again traded off this time Balagueró taking over the directing chair.  The opening moments begin a few minutes after the events of [REC] 2 as the virus has found a way out of the Apartment.  Primarily set on a Cargo Boat that’s been turned into a mobile Virus Lab the film manages to still adhere to the stylistic dictum of an enclosed primary location but again expanding in a new and interesting way.  Like [REC] 3: GENESIS before it [REC] 4: APOCALYPSE no longer uses the Found Footage aesthetics.  The film like its predecessors before it has managed to find another subgenre to successfully merge with.  This time it’s the Virus Outbreak subgenre.  Balagueró finds new life in both genres by creating some specific mysteries and expectations of Ángela Vidal after the knowledge we gain in [REC] 2.  The film finds a way to quote not just the best of the filmed versions of the Virus Outbreak subgenre but the written ones too with an homage to The Hot Zone (the non-Fiction book by Richard Preston arguably the best of this genre in any format).  Any film that finds room for that and tazering zombies is a great way to end the series.

The transfers on all four movies are nothing short of spectacular.

Only the original [REC] is top to bottom shot like a “found footage” film with all the quirks and digital artifacts held within.  Some people may find this a mark against the film BUT as this is how it was designed and intended there is no critique of the transfer.  The image is always razor sharp in the original with the use of HDCAM and HD CCD TV Cameras the images are always intended to be more video like than actual film.

As the films progress the series moved away from the Found Footage aesthetics to more traditional narrative filmmaking and by default began to be filmed with Digital Film Cameras.  Each film because of this gets better and better with regards to transfers.  It’s not to say that any of the films look subpar, far from it.  The adherence to that aesthetic was purposely meant to look degraded.  It is definitely not a fault of the transfer. Rather the transfers make everything sharper.

The work that has been done on these transfers is nothing short of beautiful.  The blacks and contrast levels even in the first two films are great.  Like the upcoming release of House on Haunted Hill, Scream Factory’s transfers of these films work in favor of films that are primarily shot in the dark, where those blacks and contrast become of vital importance.

Below are individual reviews of the extras features housed in each disc.

The commentary by writers/directors Balagueró and Plaza is an informative, thoughtful commentary track. Please note that the commentary is in Spanish with subtitles.

The Making Of [REC] is a 40-Minutes making-of featurette that’s a great exploration of the making of this horror film.  The making-of is high quality look into the production of the film.  They explore most of the aspects of the production with a fly-on-the-wall quality.  This is definitely the best feature of the disc.

Crew Interviews amount to about 45-minutes of discussion with various cast and crew.

The deleted and extended scenes are all fine but really would have taken away from the story they were telling.

There are an additional 40-minutes of b-roll behind-the-scenes footage.  The footage is edited together but not in the way that the making-of was with interviews intercut with the said footage.  All the same its a fascinating look at the making of this film.

Rounding out the extras are a Teaser, Trailers, TV Spots, and a Still Gallery.

The commentary by writers/directors Balagueró and Plaza like the previous track is an informative, thoughtful commentary track. Please note that the commentary is in Spanish with subtitles.

The Making of [REC] 2 – In An Affected World is by far the best feature on not only this disc but the entire set.  The nearly 2-hour making of is as impressive as any of the making-of’s done for any Scream Factory disc of recent memory.  There isn’t a topic not discussed in this documentary from the pre-production, production, and post, visual FX or makeup work.  Anyone with a passing interest in the film or filmmaking will love this documentary.

They also included more behind the scenes b-roll footage, not on the making of.  It amounts to another 30 minutes of footage.

Again the deleted and extended scenes are all fine but really would have taken away from the story they were telling.

The A Walkthrough of the Set is exactly what you expect, a walk-through of the Apartment structure set they used to make both films.

[REC] 2 on Tour is a look at [REC] 2 and the filmmakers as they take it around the world to premiere it at various festivals.

Sitges Film Festival Press Conference is an extended panel with the filmmakers discussing the making of the film and taking additional questions from the Press.

[REC] 3: Genesis – Preparing A Bloody Wedding is another nearly 2-hour making-of documentary.  Similar to the documentary on the second film’s disc this is an exhaustive look at the third in the series.

The Making Of [REC] 3 is more of an EPK style making-of rather than the detailed look that the previous special feature was. In fact, much of the content is covered in the first documentary.

Again the deleted really would have taken away from the story they were telling BUT these along with the Outtakes included are actually a lot of fun.

The Making Of [REC] 4: APOCALYPSE is the primary special feature on the disc.  At 27-minutes this making-of focuses on the physical production of the film aboard an actual Russian fishing boat (though there was a lot of set work done).

Scream Factory has hit a Grand Slam with the [REC] Collection.  Everything is perfect from the presentation and extras.  This is Top Ten, End of the Year kind of quality.  HIGHEST POSSIBLE RECOMMENDATIONS!