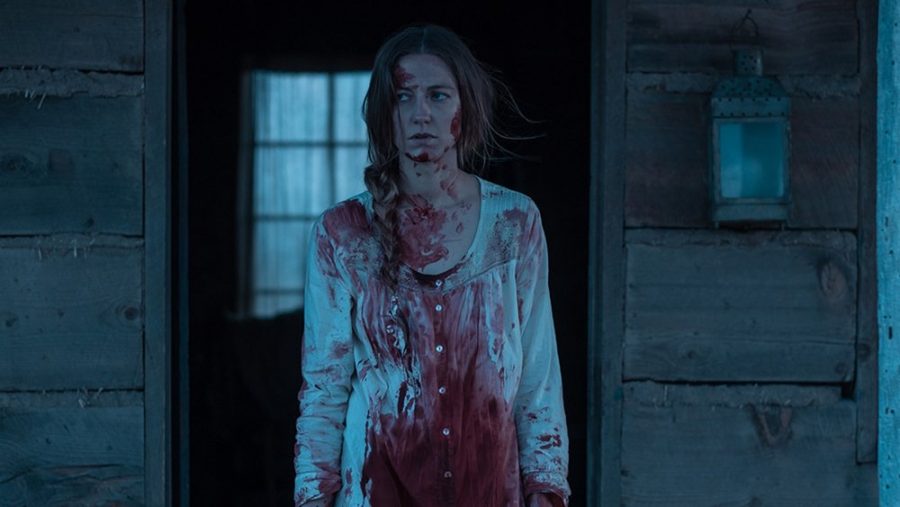 Some places are tainted, cursed.  They are stained by past misdeeds that can’t be scrubbed clean, not even with the blood of the innocent.  This concept recurs throughout the horror genre, most notably in Stanley Kubrick’s adaptation of The Shining.  Writer Teresa Sutherland and director Emma Tammi effectively transplant this theme to the Western frontier of the late-1800s in their new film The Wind.

Isaac and Lizzie Macklin live alone of the desolate plains of New Mexico. They have suffered a loss, but that source of grief is unexplained through the first act of the film.  One day Gideon and Emma Harper arrive, doubling the population of the “neighborhood”. Gideon is inept as a farmer and a homesteader, and Emma seems to think that Isaac makes for the better frontier spouse.  When Emma becomes pregnant, the distrust between the two women grows, and things begin to take on a decidedly supernatural bent.

The Wind does for the turn-of-the-20th-century West what Robert Eggers’ The Witch did for 1630s New England.  And, yes, that is intended as the high praise it seems to be.  Both films beautifully render the fear and dread of living in a world where your safety and survival depend solely on your own wits.  The fear of the unknown is a very real thing.  The characters in The Wind have limited contact with the outside world. Myth and reality can be difficult to differentiate.  The supernatural seems no less fantastical than the stories found in religious faith.

For the majority of the film, Lizzie finds herself alone, awaiting her husband’s return from an expedition to obtain provisions for the upcoming winter.  Her only company is the incessant whispering and whistling of the wind.  As with the best psychological horror, the action works  on two levels.  Lizzie may find herself in the midst of supernatural phenomena, or she may be slowly losing her mind, developing a bad case of cabin fever like Jack Torrence just before he picks up an axe and goes on his rampage in The Shining.

The Wind offers a feminist spin on the frontier western and shows us the ways in which the women were the backbones of families living in the untamed wilderness.  Child birth is depicted as nothing short of mortal combat — a struggle for the mother to stay alive while bringing another life into the world.  The women in The Wind also come to represent progress and receptiveness to new ideas.  The bad news for the men is those new ideas involve prairie demonology and a growing realization that these four people may not be the only entities present on the plains.

The Wind results from that perfect storm of lower-budget film-making when writing, directing, production design, sound design, cinematography and performances come together to make something truly memorable.  (And don’t forget the haunting and mournful score from Ben Lovett.)  This film proves that you don’t need millions of dollars to tell a story well.  The film has been “picked up” by IFC for a theatrical release in the near future.  Don’t sleep on this one.  See it in a theater.  Back these artists with your box office dollars.

The Wind deserves to find an audience.