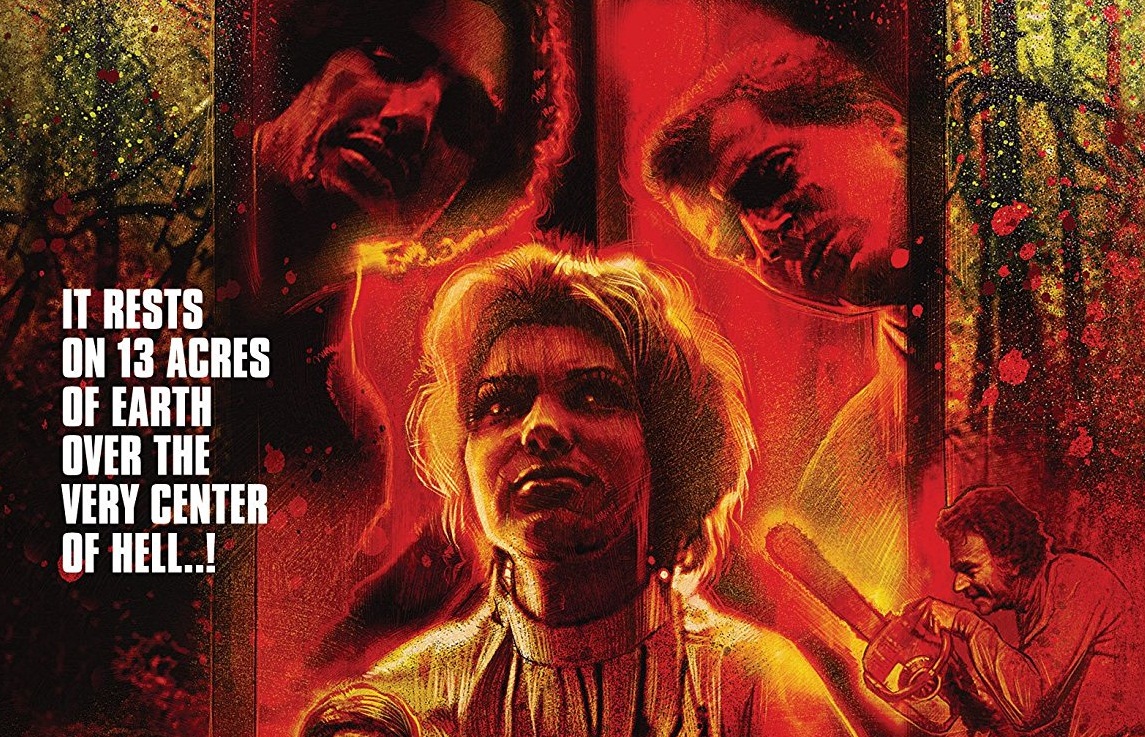 Adam reviews the most notorious of Wes Craven’s features, his first in fact, the ugly and brutal The Last House on the Left.  Recently restored by Arrow Video in a new special feature ladened limited edition Blu-Ray.

Note: What is reviewed is the Uncut version of the film.

Wes Craven’s predilection to “shock & awe” in The Last House on the Left feels wasted and not weaponized as many feel about this Horror Classic.  The film itself alternates between stark horror and goofy almost Keystone Kops tomfoolery.  Craven’s film shows an unbelievable wrongly headed comedic ineptitude on everyone’s part but the group of psychotic Killer Rapists at the center of the film.

The film tells the story of the Collingwood’s and their daughter Mari (Sandra Peabody).  On her 17th birthday, Mari and best friend Phyllis (Lucy Grantham) head to New York City for a concert.  Looking to score some weed for the night puts them in contact with Krug (David Hess) and his gang. After brutalizing and killing Mari and Phyllis, Krug and company in a sick game of fate end up at the Collingwood’s home.  What begins as an act in hospitality ends in ruthless violence and revenge from both sides.

There is a blunt force trauma style of storytelling that plays out in the film that is undeniably powerful in moments.  Craven at this point in his career just did not have the know-how to pull everything off that it feels like he was attempting to do and say with the film.  Much of what he is trying to do with secondary characters fall flat.  Though worse than flat the film in these sections is tone deaf to the point of being insulting to an audience.  The scenes without Krug and his family of miscreants play out like an episode of Benny Hill complete with accompanying soundtrack.  One can see the point that Craven was attempting to make but the way that he goes about it is so crass that it instantly takes you out of the picture.  Far more indicting is that it wreaks of lazy writing.

Craven then expects one to feel something when the film turns into a revenge thriller.  Without any sort of true character development between the parents, the cops, Mari, and Phyllis all we are left with is guttural reactions to the assault.  That isn’t good storytelling.  It’s a quick fix shortcut to instantly having your side with these cardboard cutouts of characters.  Craven would refine his work and thesis too much better effect with The Hills Have Eyes, a better character study, and more cohesive film.

The Last House on the Left is powerful in moments, yes. It’s ugly, wrongheaded, inarticulate storytelling that breaks the film under its own weight.  The film is ultimately empty “shock & awe” one wishes that had more substance and genuinely articulate character work behind it.

Each of the multiple cuts of the film has been restored in 2K transfers from the original negative.  The results are shockingly clear.  The last iteration of the film on Blu-Ray was an okay transfer but was marred by not having the original elements.  These new transfers much like the most recent transfer for The Texas Chainsaw Massacre is night and day.  There’s a fidelity to the transfer that brings the transfer to the next level, like TCM, and for those that love this film, it will be a welcome surprise.  One word of note like many of Arrow’s transfer there is a healthy amount of grain.  This reviewer did not find an issue with this as the transfer is akin to a new freshly struck 35mm print.  Anyone that is looking for that Universal Studios-style DNR to perfect clarity look elsewhere as Arrow has kept the grain structure intact.  It’s a worthy transfer and worthy of any fans adding it to their collection as it trounces all the transfers before it.  Bravo!

Arrow has done it again. The UK based label shows why they have procured multiple much-sought-after titles that other boutique labels may have gone after.  They have managed to pack this set with an exhaustive set of extras both new and archival.  The three-disc set, comprising of 2 Blu-Rays and 1 CD soundtrack, houses everything and anything that was produced about The Last House on the Left, including multiple cuts of the films.

The multiple cuts are of interest as they really do show how editing can shape and ultimately either destroy or help a film.  Ultimately, the other cuts R-Rated and the infamous Kurg and Company are footnotes rather than regular viewing options.  Any viewer will want to watch the Unrated Cut that went onto much infamy and made both Wes Craven and Sean Cunningham Horror Icons.

DISC ONE [BLU-RAY] – THE UNRATED CUT

The three commentary tracks are on the Unrated Cut of the film.  Each provides very different points of view on the film.  For this reviewer’s money, the best is the archival commentary from Craven and Cunningham.  Craven has always been very adept at dissecting and interpreting his films.  Here is no different.  Many will have already listened to this and to the Cast commentary as they are from the previous DVD and Blu-Ray release. The newest commentary track by critics Bill Ackerman and Amanda Reyes is going to be the one that fans of the film will want to dig into (having already listened to the other two).  Ackerman and Reyes are a great duo that tackles every piece of critical viewpoint you could ask.  It’s a great informative track that fans will definitely be happy with.

Celluloid Crime of the Century is a 60-minute making-of documentary, also archival featurette.  After viewing this documentary there really is no reason to update with a different making-of. The older archival featurette is the kind of making-of featurette that was common in the mid-00’s during the height of the DVD craze.  The time and attention to detail here are great.  The doc covers everything from the inception of the story, script, casting, production, editing, release, and beyond the release.  Every cast member, Craven, and Cunningham all contribute.

Scoring Last House on the Left is a 10-minute featurette where David Hess (he also stars in the movie as Krug) about his score and the songs that accompany the film.

It’s Only a Movie: The Making of The Last House on the Left is another archival making-of documentary.  Though not as comprehensive as the Celluloid Crime of the Century it still manages to divide into aspects not covered in that documentary.

Forbidden Footage is a small featurette that discusses the filming of the notorious rape and torture scene in the film.  As one would expect with the rough nature of the production it is not surprising that the scene was not filmed with any sort of care.  The feature only reinforced my distaste for the scene.  Many of the male cast members discuss the sort of callous and abusive treatment of both Sandra Peabody and Lucy Grantham that’s pawned off as “METHOD ACTING” during the making of the scene.  To be honest the actors on camera really should be disgusted with themselves but are not.

Junior’s Story – is a new interview with Marc Sheffler discussing his career before and after playing Junior the “weak” one of Krug’s gang.

Blood and Guts – is a new interview with Make-Up FX artist Anne Paul about her work on the film.

Deleted Scene – Mari Dying at the Lake, Extended Outtakes and Dailies, Trailers, TV Spot & Radio Spots, and Image Galleries round out the first disc.  It should be noted that the Outtakes and Dallies were newly transferred and definitely benefit from the HD Transfer.

The Craven Touch is a brand new featurette bringing together interviews with a number of Wes Craven’s collaborators to discuss Craven’s work as a whole. A sort of honoring of the late great Master of Horror.  The featurette has interviews by Cunningham, composer Charles Bernstein, producer of The Hills Have Eyes Peter Locke, Scream cinematographer Mark Irwin, and actress Amanda Wyss from A Nightmare of Elm St.

Early Days and ‘Night of Vengeance’ is an interview with documentarian Roy Frumkes as he discusses Last House on the Left and Wes Craven’s early filmmaking career and the life that informed Craven’s work.  Many will remember Frumkes from the amazing documentary (if you haven’t seen it… FIND IT!) Document of the Dead.

Tales That’ll Tear Your Heart Out is a featurette that looks at an early Craven short film that was never completed.

Q&A with Marc Sheffler is a long-form Q&A session a 2017 screening filmed at the Hollywood Egyptian for The American Cinematheque.

Krug Conquers England is a fascinating look at the theatrical tour of the first ever uncut screening of the film in the UK where it was quickly banned and eventually was on the “Video Nasty” list.

Even if the film is ultimately not this reviewers tastes, this set is not to be slept on.  Arrow has another home run on their hands.  Beautiful transfer, a wealth of thoughtful extras, beautiful packaging, and the full remastered soundtrack on disc.  For fans of this film, this is a HIGHLY RECOMMENDED!!!