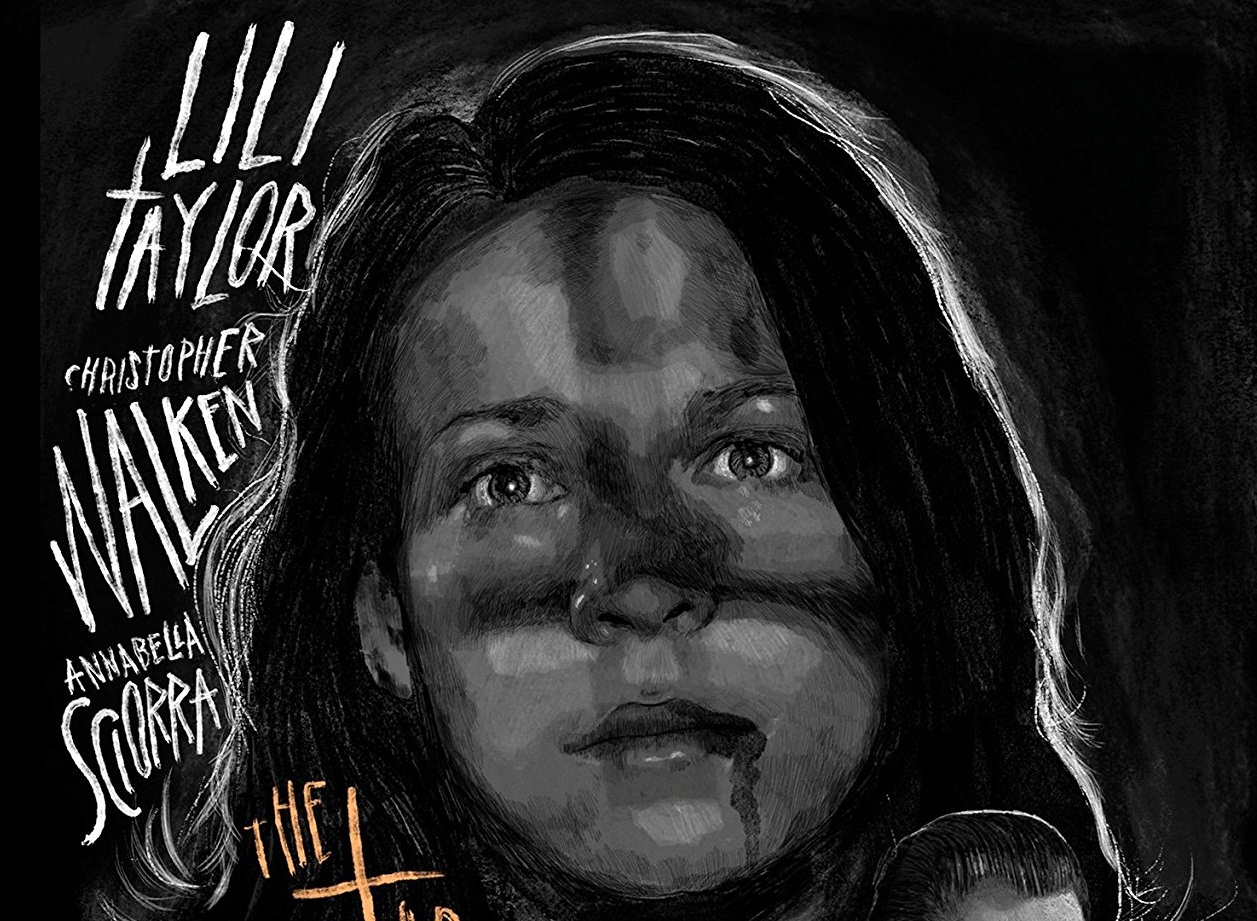 Adam takes a bite into Abel Ferrara’s The Addiction, and it bites back!  The Black and White Vampire film is being released by Arrow Video on Blu-Ray for the first time.

There were many a Vampire through pop culture in the 80’s.  It seemed like the du jour movie monster of the era.  Anne Rice’s novels turned them into Bowie-esque sexually androgynous ageless Rock God.  Rock Gods played them such as Bowie himself playing a Vampire in Tony Scott’s lush incoherent fever dream The Hunger.  Near Dark showed how Vampires could hit viscerally in an action film.  These and countless others helped pave the way for further examination in the 90’s, using Vampires for sexual politics, the AIDS epidemic, and of course drugs abuse.

As the title suggests The Addiction is about just that… addiction.  Abel Ferrara’s film though a vampire story is a parable for all forms of addiction and how it consumes us wholly.  Shot in stark Black and White The Addiction has more in common with In Cold Blood or Man with the Golden Arm than it does with its contemporaries.

NYU Grad Student Kathleen (Lili Taylor) is bitten by a beautiful stranger (Annabella Sciorra) who taunts Kathleen with a continuing mantra of “tell me to go away.” Kathleen is quickly turned and begins her hunt for blood.  The blood is not for life but for pleasure, for the fix.  Their unquenchable thirst is their torturous curse. This bloodlust calls to Kathleen, begging for the next fix.

Like much of Ferarra’s work The Addiction wears its nihilism like a warm blanket. Kathleen is a junk with no remorse or guilt about it.  Ferarra shows her plunge into the depths of hell with little to no fanfare.  Much like a junkie that gets their first fix, her mind has been altered, all that matters is where is the next fix without consequence.  It just happens.  Like in life a decision is made either by you or for you and it is done.  There is a matter-of-factly tone to all this that’s unsettling, which is the point.

Ferarra and screenwriter Nicky St. John wants to show the horror of addiction.  The care nothing of the lifestyles of the rich and Vampires, this is not the lush Victorian melodrama of Bram Stoker’s Dracula. The grime and the grit permeate from the screen.  Nothing is clinical in the film. There is a disgusting layer that New York City and its citizens seem to be awash of in the film.  The film adroitly does this not with just the look but the set pieces.  Kathleen’s first fix is not some sort of sexualized set piece, its disturbing, gross and highly unsettling.  That tone and force are maintained through the entire film leading to one of the bleakest endings in the history of Vampire films.

Lili Taylor is amazing as Kathleen; part victim, part predator, and all junkie.  The actress goes to the depths of her soul for this performance. The performance is unfettered by vanity.  Her Kathleen is at turns weak, callow, vicious, powerful, angry, and pathetic.  Sometimes all within the same scene.  The work is impressive as anything Taylor did in the 90’s.

The rest cast is uniformly perfect.  With this type of storytelling, every actor has to be in line with the tone and purpose of the film.  The supporting cast is a who’s who of 90’s indie cinema darlings, beginning with the amazing work done by Christopher Walken.  As soon as he enters the film one is acutely aware this is Prime Christopher Walken era.  As Peina the ancient Vampire that takes in Kathleen in to attempt to detox her gives Walken space to do what Walken does best, not dance but pontificate verbosely. The rest of the cast; Paul Calderon, Edie Falco, Fredro Starr, Kathryn Erbe, and Michael Imperioli all do great work.  Annabella Sciorra does especially impressive work as “Casanova” the vampire who turns Kathleen.  Her two scenes are stunning as Sciorra plays against type as an agent of chaos.

The Addiction is not a petite story but one overflowing the void of nihilism.  Abel Ferrara has found the perfect delivery system to tell a story of the bankruptcy of the soul that an addiction can lead to. This is horror at its socially and existential best.

Arrow has commissioned a new restoration from a 4K scan of the original camera negative that was approved by director Abel Ferrara and director of photography Ken Kelsch.  The results of this are nothing short of brilliant.  The black and white photography is luminous in a way that the film never looked, even upon its initial theatrical release.  Arrow Video continues to astonish with their transfers.

The Audio Commentary by Ferrara and Critic Stevens is a lively one.  Anyone that’s listened to an Abel Ferrara commentary will know exactly what to expect.  There is a bit of lunacy on the commentary.  Nothing on the level of his infamous Driller Killer commentary where the director alternates from honestly great bits to truly strange behavior.

Talking with the Vampires is the 45-minute making-of documentary that was directed by Ferrara himself for this Arrow Release.  The great and brutally honest documentary features Christopher Walken and Lili Taylor, composer Joe Delia, Ken Kelsch, and Ferrara.  The featurette is rambling at times but ultimately a truly intimate portrait of people that were involved in making a film that was about addiction who many themselves had addictions at the time.  Great stuff here.

The new interview with Abel Ferrara has the director in a subdued mood as he discusses one of his best films.

The new Interview with Brad Stevens is actually not an interview as much as it’s a visual essay by Stevens on The Addiction and where it places itself in the pantheon of great vampire films.

Possibly the best feature of the disc is the archival interview with Ferrara circa 1993 as he edits The Addiction.  I will say no more as to ruin the enjoyment of watching what unfolds.

The Addiction is masterful horror filmmaking and Abel Ferrara at the height of his powers.  Underseen at the time, this Arrow Video release should resolve that misstep.  The disc with its beautiful transfer and in-depth special features makes the case that this is great horror, which it is.  HIGHEST POSSIBLE RECOMMENDATIONS!!!

The Addiction is out now on Blu-Ray from Arrow Video