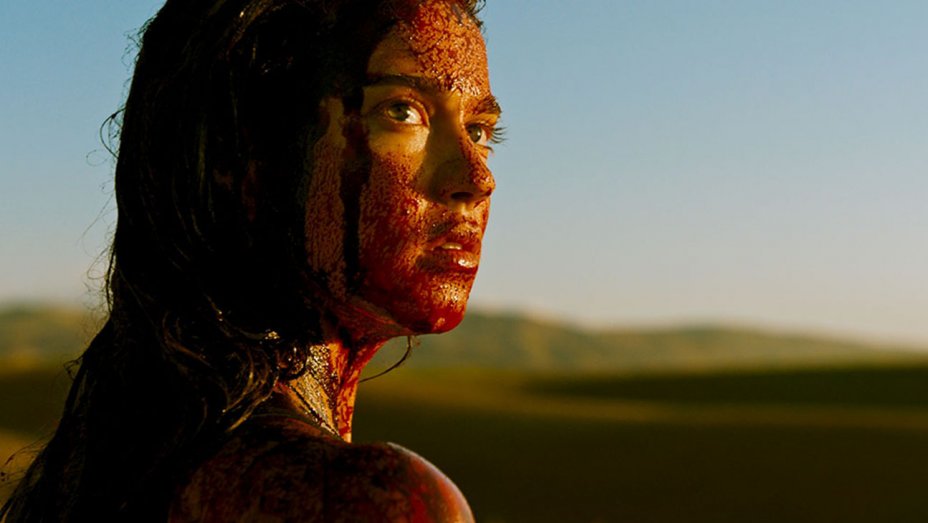 With its saturated colors and vivid splashes of blood, Revenge, the new action thriller from writer/director Coralie Fargeat that took the Toronto International Film Festival by storm, is a technicolor nightmare filled with impalings, dismemberments, gunshot wounds and even one naked shootout.  Oh, yeah, and there’s also a cringe-inducing scene where a character roots around in his foot to remove a large shard of broken glass.  In short, it’s a damn near perfect midnight movie for a film festival audience.

Richard, a wealthy middle-aged philanderer, decides to spend a few days with his mistress, Jennifer, before embarking on a hunting trip with his buddies. When Jennifer is raped by one of the other two men, she threatens to expose her affair with Richard if he doesn’t deal with the situation. Staying at an isolated mansion accessible only by helicopter, Richard decides the easiest solution to his quandary is to kill Jennifer and cover up her disappearance. Needless to say, sporting a title like Revenge, Jennifer survives Richard’s ambush and embarks on a violent path to freedom.

Given the sexual harassment controversy permeating the film industry these days, it seems either gutsy or foolhardy to make a film premised on the victimization and torture of a woman. Interestingly, the writer and director of the film IS a woman, begging an intriguing question: Is it acceptable to depict such misogynistic violence if the artist behind the art is female? In her pre-screening comments, Fargeat stated that she feels it’s far more important to spark discussion and debate about sexual harassment and violence toward women than it is to suppress the art that depicts it or to boycott the festivals grappling with it behind the scenes.

This may all seem like a lofty debate for a gritty, grindhouse action thriller, and in all fairness, the men in this film get as good as they give. The violence and bloodletting is far from solely male on female. When Jennifer takes action against her male oppressors, she metes out some bloodthirsty justice of her own.

Revenge offers thrills aplenty, and its visual flair is captivating.The performances are uniformly solid. The audience roots for Jennifer and hates the bad guys.  Unlike so many “by-the-numbers” VOD thrillers that appear on rental sites every week, Revenge is a cut above, a thriller where the viewer feels invested in the outcome. We want to see this avenging angel kill her way out of her predicament. Is it morally wrong to feel that way? Maybe.  Is it thrilling nonetheless? Definitely.

Revenge opens in select theaters and hits VOD on Friday, May 11, 2018.