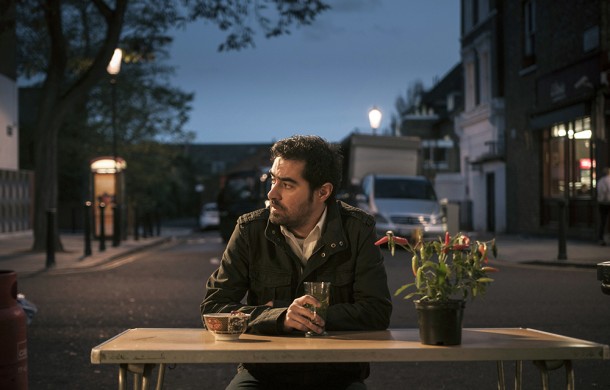 Photographer turned writer/director Mitra Tabrizian brings an enigmatic character to the screen and provides a window to a life probably unseen and unconsidered by most cinema audiences.

Acclaimed Iranian actor Shahab Hosseini (The Salesman, A Separation) plays the titular role of Gholam, an Iranian taxi driver living in London, working two jobs and living in one damp room. He belongs in neither world properly, occupying space somewhere between the two. It’s existing rather than living.

We’re told very little about Gholam – we see that he’s a quiet man, a bit of a loner, and gradually we begin to accept that he seems like a decent man who helps elderly people, always pays for his meals and doesn’t want to create any fuss.

And then one day, minding his own business, he is recognised as a possible war hero from the past by a shady character, and finds himself with a decision to make.

Gholam moves at a gentle pace, with Hosseini doing a lot of walking in the London rain as he mulls over his options and tries to decide how much of himself he is prepared to compromise. And Hosseini is so good at that. We see his internal conflict without him having to explain himself to anyone. His face and demeanour conveys so much.

It’s also a film which shows an unpleasant corner of London, and it’s no accident that the small kindnesses we see are for the most part between immigrants, whereas the local Londoners range from highly irritating business types to bigoted violent thugs, and it’s not pleasant.

I don’t imagine this will get a very wide theatrical release, but if you come across it anywhere, it’s definitely worth 90 minutes of your time.