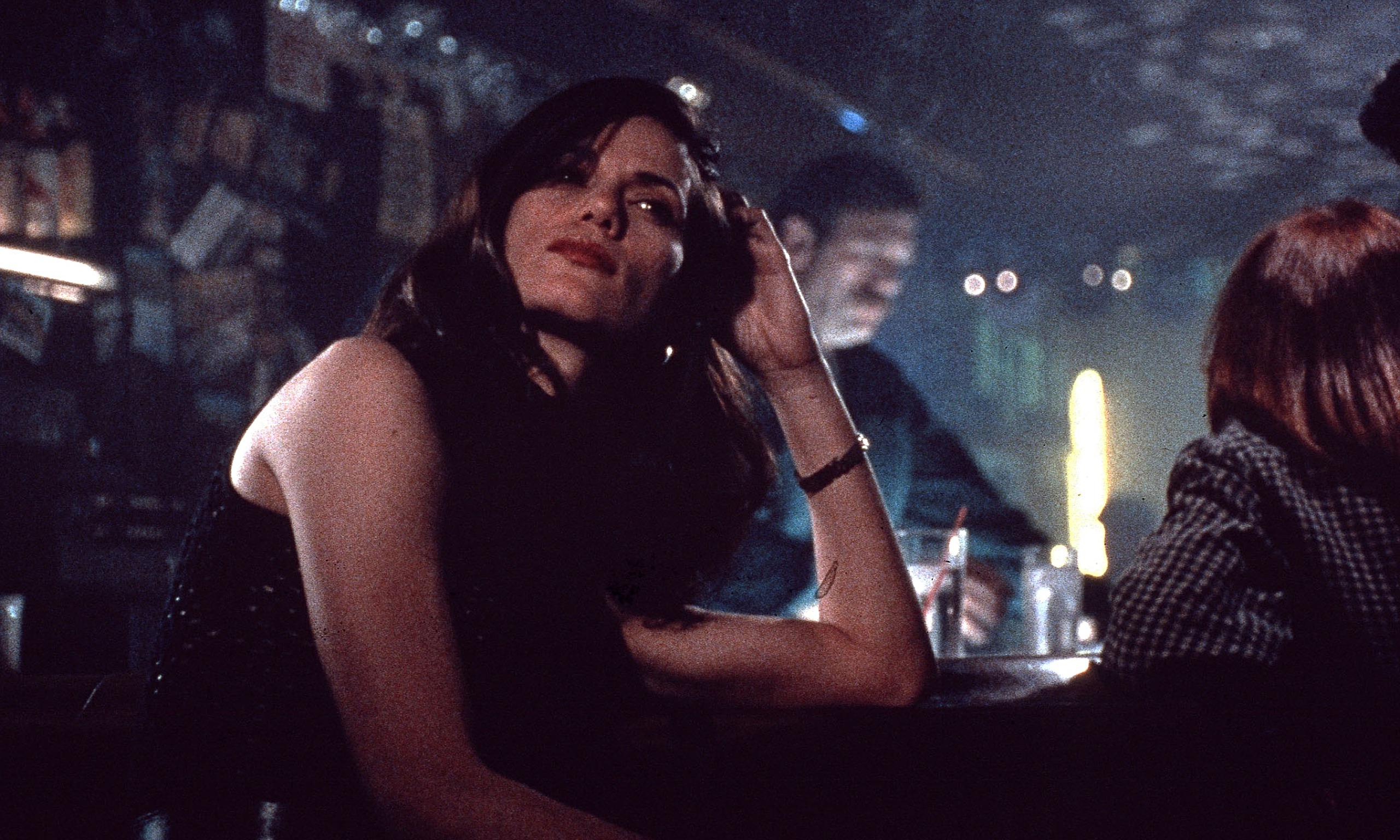 We are happy to welcome Kristen Lopez as a regular guest contributor.  The Movie Isle is excited to debut her, Her Story.  The Monthly Series is about Women in the Industry that have been unfairly maligned, mistreated, and generally forgotten as compared to their male counterparts.  For her first subject, she dives into the tragically short career of Linda Fiorentino.

I’ve always been fascinated by the women Hollywood forgot, or, in many cases, intentionally dropped. The source of all things celluloid known as the Dream Factory has run on a constant stream of pretty female faces, but with that comes the belief that those faces are in abundance. The Hollywood movers and shakers of times past, present, and future, live under one belief: those watching the movies are men, and men get bored if they’re stuck looking at the same women every day. But what if an actress doesn’t like her lot in life? What if she wants to assert herself in a manner similar to her male contemporaries? Thus the fate of the “difficult” actress. Hollywood is filled with their unspoken stories, and a subgenre of this ongoing series is to pull the spotlight back in their direction, to remind audiences of what they lost.

This is all a winding preamble to this month’s heroine: actress Linda Fiorentino. Fiorentino is an actress who never truly fit the mold. With her husky voice, sarcastic wit, and a string of femme fatale characters, comparisons to classic screen sirens like Barbara Stanwyck took hold. But just as quickly as she rose up the ladder, she came crashing down, disappearing entirely with no reason behind it short of being “difficult.”

There’s no doubt Fiorentino made decisive moves in career. Her first screen credit was playing the beautiful object of Matthew Modine’s affections in the 1985 film Vision Quest. From there she had a brief, yet memorable role in Martin Scorsese’s black comedy After Hours (1985). These early features spotlighted her as standoffish, a woman with a chip on her shoulder. The “bitch” persona started to take hold, situating her as an actress men would have to break down or chip away at.

It took nearly a decade from her debut for Fiorentino to find the role that would be her claim to fame and her undoing. In 1994 she starred in John Dahl’s The Last Seduction, a slick throwback to ‘40s noir by way of author Jim Thompson. The film follows Fiorentino’s Bridget Gregory, a woman so repulsed by her husband (Bill Pullman) slapping her that she absconds with the $700,000 he’s received for illegally selling pharmaceuticals. Unable to spend the money unless she’s divorced, or her husband dies, Bridget begins to manipulate a small-town man (a pre-director Peter Berg) into murder.

The film certainly wears its film noir heart on its sleeve, with references to Double Indemnity all over the place, including Bridget referring to herself as “Mrs. Neff,” as in Fred MacMurray’s Walter Neff. The plot, though, is incidental. What makes The Last Seduction a memorable entry in the ‘90s neo-noir scene is Fiorentino’s Bridget. Described at the outset as a “self-assured bitch,” Bridget is a woman unrelenting in her knowledge that she’s smarter than the men around her, and in reality, she is. Her husband Clay is a self-righteous idiot hounded by loan sharks. In the brief scenes of their marriage, Clay and Bridget vacillate between sexual yet stale and something out of Who’s Afraid of Virginia Woolf.

Berg’s Mike is more interesting in that he acts how most male screenwriters would write a female. He wants a relationship with Bridget; he tells her they don’t have to have sex, that he enjoys talking; he wants to spend all his time with her. Mike finds it impossible to believe that Bridget is only interested in a sexual relationship with him. He thinks that she’s damaged, afraid to get close to him because she’s been “hurt before.” He just can’t believe she’s that cruel and growing up on a world of femme fatales he’d be right. What The Last Seduction does, though, is it never places Bridget in the world of the fatale; she’s purely the cold-hearted male villain. She’s the “cookie full of arsenic” Sidney Falco; not the beautiful yet cold Phyllis Dietrichson. Because the male characters rely on their sexist assumptions of women they underestimate Bridget at every turn, allowing her to succeed in the film’s utterly callous finale.

Fiorentino was championed to be an Oscar nominee in 1994, but because the film premiered on television – and was assumed to be a “Skin-a-Max” film – it was never campaigned. She did secure a BAFTA nomination for her performance. After this film she stayed in the noir genre. 1995’s Bodily Harm sees her play a hard-boiled female detective solving a murder, and the infamous David Caruso film Jade had her returning to her femme fatale roots, albeit lacking the script and the intrigue. In 1997 Fiorentino finally received her mainstream break, playing the confused Dr. Laurel Weaver in the sci-fi comedy Men in Black.

While Fiorentino wasn’t the star of Men in Black, her character and performance did attempt to assert themselves. If not for being perpetually neuralyzed by Agent K (Tommy Lee Jones), she would have easily deduced that aliens were on Earth. The film ends with her taking Agent K’s position, becoming the new partner of Agent J (Will Smith). Unfortunately, rumors of her presumably unprofessional behavior tainted her performance. It remains unclear whether the studio asked Tommy Lee Jones to return or not for the sequel, but tabloids reported that a condition of Jones’ return was that Fiorentino would not be in the second film. The actress lacked the star power and lengthy career of her older co-star, and like all talented women in Hollywood was deemed replaceable.

Perhaps because of how different Laurel Weaver was from her previous roles, Fiorentino returned to playing characters men would classify as a “bitch.” In the last film for which she’s best known, Fiorentino starred as abortion center employee and last living relative of Jesus Christ, Bethany Sloane in Kevin Smith’s Dogma (1999). Her role as the multiple times removed grandniece of Jesus is ironic for how unladylike Fiorentino’s character is. She’s a sexually active, pro-choice, independent woman able to take care of herself. Like Bridget Gregory, Bethany doesn’t need a man unless she wants one. The character would have been too sweet with a lesser actress. But rumors continued to fly about Fiorentino being a proverbial pain in the ass. But unlike Fiorentino’s previous directors, Dogma’s Kevin Smith made no bones about his distaste for her. He openly said he’d have preferred casting Janeane Garafolo in the role, supposedly because of how difficult Fiorentino was.

What makes Fiorentino’s fall from grace so frustrating is that there was never any presumed proof of her volatile nature. No other directors outside of Smith vocally complained about Fiorentino and, if they did, there were no specific examples. The claims of her bitchiness were specious and non-defined. She made five more movies after Dogma, none of which had the critical success or audience awareness of her former features and she eventually faded from cinema entirely.

Was Linda Fiorentino unfairly maligned? Yes, she was. Her characters were uncompromising in their selfishness, too modern. If she played a character like Bridget Gregory today, in the landscape of #MeToo and more modern awareness of misogyny, she’d be praised for her performances as much as her take no shit attitude. Maybe, if anything, directors and producers believed she was Bridget Gregory and wanted her to play the Hollywood game of being appreciative. Regardless, an actress of immense promise went out with little more than a whimper and it’s our loss.

8 comments on “Her Story #1: Linda Fiorentino”