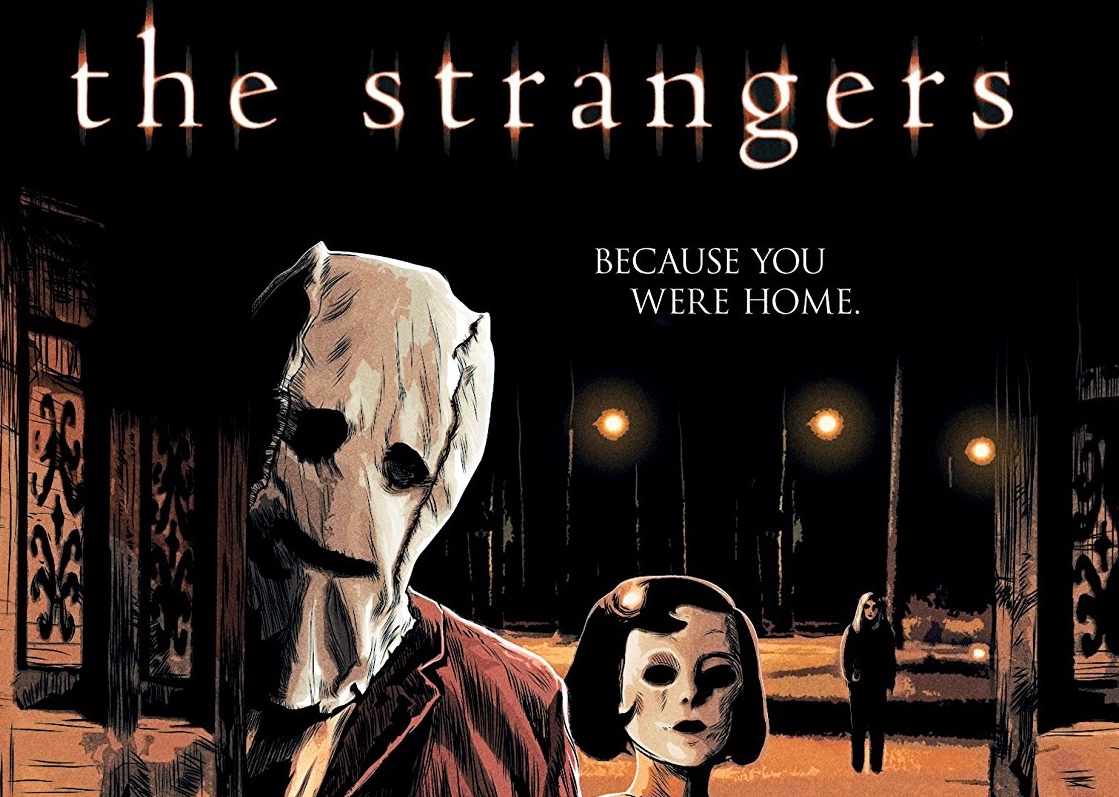 Adam falls in love with the new Scream Factory Blu-Ray edition of artful, tense, and brilliant horror neo-classic The Strangers.  The film was written and directed by Bryan Bertino and stars Liv Tyler and Scott Speedman.

What separates a truly great Horror Film from an average one is its ability to provoke not just a base reaction of scares or disturbed unease but to provoke a truly emotional reaction as well.  The greats of the genre do just that; The Exorcist, Halloween, The Conjuring, Silence of the Lambs all have a strong emotional component that works beyond the horror.  The Exorcist is not only one of the scariest films of all time it’s an effective parallel drama about a Priest coping with the passing of his mother and a mother and daughter dealing with the ramifications of divorce.  The Strangers is made with that same sort of care.  It works as both a chamber drama and home invasion story.  Because of the care the filmmakers put into making The Strangers it has aged much better than its contemporaries.  Slowly climbing the ranks of truly exceptional horror films.

The film directed by Bryan Bertino follows Kristen McKay (Tyler) and James Hoyt (Speedman) as they must fend off three masked strangers who set upon tormenting the couple throughout the night.  What is often the premise for your standard issue home invasion plays out nothing like a standard issue entry into the subgenre. The story never delves into the sort of trashy exploitative junk that many home invasions do.  Rather the film relies on the bond that has been form between the audience and its main protagonist.

The dance the Tyler and Speedman play over the course of the film is one of the trickiest in recent memory.  The film has to feel as a part of a whole and not two separate films.  Neither plays things conventionally.  There isn’t a “final girl” moment.  There isn’t some act of bravery or uncommon brawn.  Nothing feels out of step by the characters and the actors.  There’s a delicacy that Bertino handles the performances with that’s still striking after decade.  The care and time Bertino allows the film to spend with these characters relationship before the horror begins makes The Strangers closer hued to Bergman or Antonioni.

Therein lays the power of the film.  Rather than focusing on histrionics, Bertino turns his attention to the couple.  Kristen and James are in the midst of a breakup as the film begins.  We are only given fractals, glimpses of what happened.  These opening scenes play out like Antonioni’s La Notte less narrative and more expressionistic.  As both writer and director Bertino knows the film shouldn’t spell everything out.  This isn’t beautiful people in for a weekend of fun, drugs, and sex standard issue horror.  It is a couple at the end of their relationship thrown into a situation that is as much a mystery to them as it is to us.

The work done by Tyler and Speedman is front and center here, and marvelous.  The Strangers asks both actors to take things seriously beyond the horror premise. Neither fails to live up to what the script (written by Bertino) asks of them.  The first thirty minutes play out like an intimate drama.  Bertino leans into the couple’s drama.  Rather than play this out as quickly as possible.  As a film The Strangers understands that this is as important, if not more so, than the horror.

We see Kristen and James happy earlier at a wedding but we also see the scorched crater after.  There is much that is implied and inferred by the film rather than explicitly stating the obvious.  At certain points The Strangers is smarter than most dramas of the same ilk.  Bertino’s sensitivity in these moments are what makes the film so special.  He makes us invest in Kristen and James.  We want to see them work everything out.  We want to see them survive this horrendous night.  Which makes everything in the last twenty minutes some of the most harrowing and effective sustained horror of the last twenty years.

The film doesn’t rely on gore like Inside or Martyrs for reaction but the emotional connection we have to Kristen and James.  In its final moments the film finds both uncommon beauty in stark brutality.  The Strangers is transgressive horror at its best.

The New HD Masters of both the The Theatrical Cut and The Unrated Cut Taken From The 2K Digital Intermediate corrects all the ills of the initial Universal Blu-Ray release.  Scream Factory has created transfers that look as beautiful as the film did when it was released.  There is a beautiful sheen of grain on both transfers, rather than the clinical DNR version that Universal released nine years ago.  The transfer’s black levels are perfectly rendered here allowing the cinematography from Peter Sova to breathe.

The include the following:

The first discs that houses the theatrical cut and the original content from the Universal Blu-Ray release.  The Element of Terror and Strangers At The Door amount to about twenty minutes of EPK style interviews.  Nothing to write home about.  Also included are two deleted scenes, TV spots, and the very effective theatrical trailer.

The second discs that houses the Unrated Cut (and the preferred version of course) has all the new features as well.

Defining Moments is a 30 minutes interview with Bertino as he discusses the origins of the project and the making of.  Bertino is justifiably proud of the work he’s done.  He also gives some juicy tidbits on the other directors that attempted to make the project, and some honest reactions about the budgets in horror films now.

All the Right Movies is a 11 minute interview with Kip Weeks who played the Man in the Mask.  Weeks discusses his audition and the production itself.  There’s some good tidbits on how the process of making the titular Stangers into more than just masks.

Brains and Brawn is a 13 minute interview with Laura Margolis plays the Woman in the Pin Up Girl mask.  Margolis like Weeks discusses her audition process but also discusses her part and how it evolved and Bertino’s work with her on the part as the leader of the group.

Deep Cuts is a 20 minute interview with editor Kevin Greutert and his superb work on the film.  The interview is fascinating for anyone that is looking for a “nuts and bolts” discussion of what an editor does on a film and specifically a horror film.  Greutert’s work is so vital to the films success and is definitely the best bonus feature on the disc.

The Strangers is horror at its most emotionally effective.  Scream Factory delivers the goods with a great transfer and thoughtful extras for a neo-Classic.  HIGHEST POSSIBLE RECOMMENDATIONS

Scream Factory’s Blu-Ray edition of The Strangers is available on March 6th.