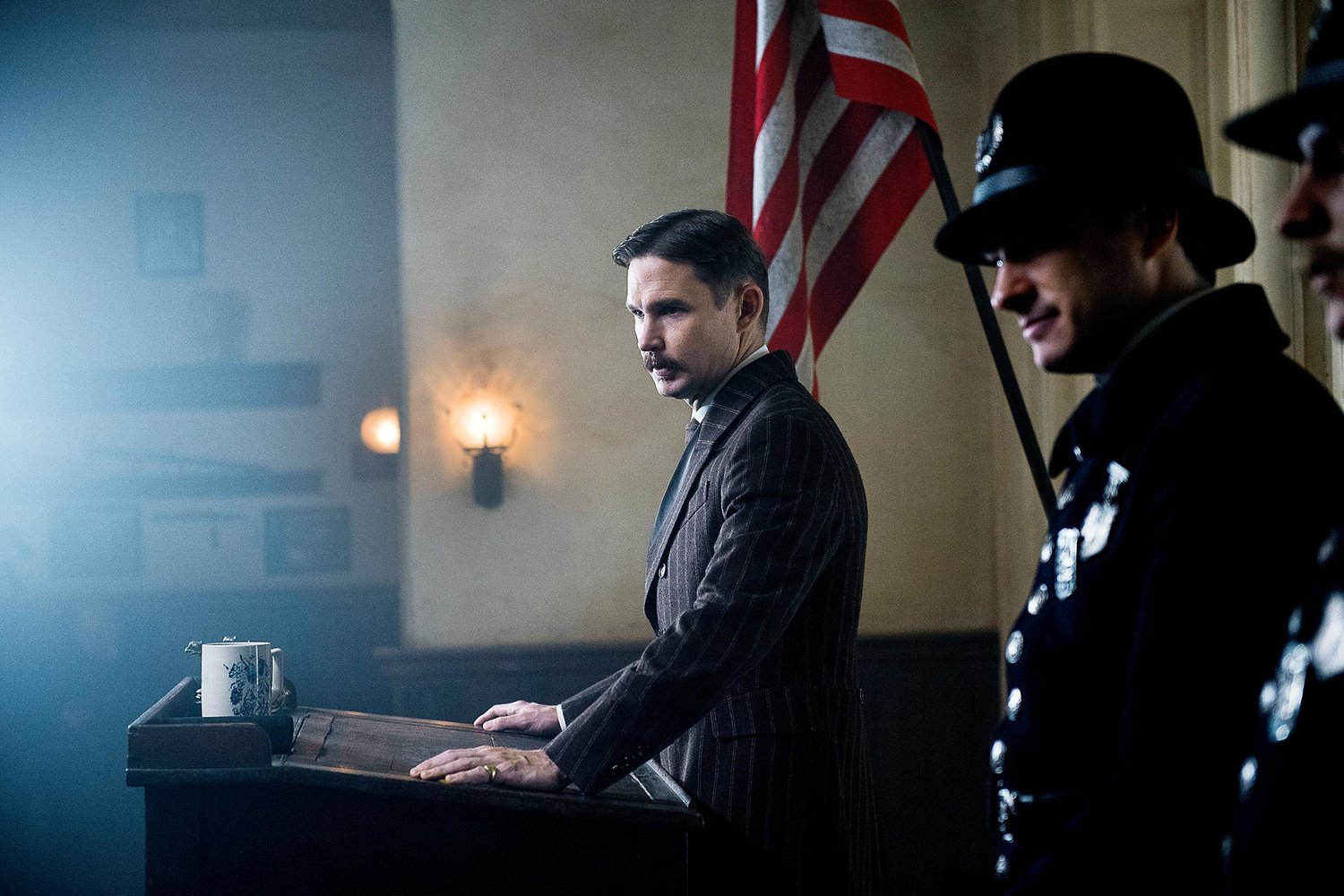 Adam reviews the fourth episode of new TNT Drama The Alienist starring Daniel Brühl, Dakota Fanning, and Luke Evans.  The series tightens the screws as the hunters and hunted begin to play that most dangerous of games.  The series is based on the Best Selling Novel by Caleb Carr.

“A Night with Venus, a lifetime of Mercury” – A Dentist’s Patient in The Alienist.

That bit of archaic dialog is a payoff to last week’s episode title and a punctuation on episode four’s ending that I couldn’t help but place at the top of the review.  The fourth episode entitled “These Bloody Thoughts” finds the first real glimpse of the killer Kreizler (Brühl ) and his intrepid team have been hunting.  As the team begins to assemble clues and more of this shadow becomes clear, the narrative begins to bring this shadow into focus.  An inventive narrative trick and hook that finds the more clues to whom this killer is the more we begin to see him in the show.

Kreizler, Howard (Fanning), and Moore (Evans) still reeling from the verbal altercation of the last episode.  Kreizler’s finds himself searching beyond the medical norms and beyond his fringe studies to find answers. Moore himself to investigates searching like Kreizler for answers that he does not know the questions to.  Both men whom continually find themselves at odds with one another through their increasingly combative relationship does bear fruits for the case.  This dynamic with Howard the voice at the reason of these two makes for a solid framework that they’ve built this series around.  One does hope that this does not turn into a cliché procedural framework but rather a convention that is used for this particular story.

Many would consider this episode “shoe leather” an episode merely there to be filler.  This is definitely not the case.  Much of the episode is building upon continuing escalation of drama and stakes in this case.  Not only the final moments which finds all of our characters at a very dangerous disadvantage but the whole episode.

Plots begin to take shape with supporting characters coming into clarity.  We find Former Police Commissioner Byrnes (Ted Levine) and Captain Conner (David Wilmot) may know more about the killer and killings than we ever expected.  Marcus Isaacson (Douglas Smith) has continued a relationship with a Communist much to his brother Lucius’s (Matthew Shear) chagrin. Kreizler’s relationship with both Roosevelt (Brian Geraghty) and Mary (Q’orianka Kilcher).  These subplots raise the series beyond tracking a serial killer.

Much of what made Caleb Carr’s original novel such an instant success was its ability to contextualize and microscopic details of the era.  Carr’s novel was one of the first of it’s kindly giving us a narrative that allows a read to not see history as stuffy but as the wild, dirty and dangerous place it was.  Though the show may not detail the twelve-course meals that Kreizler and team eat, or discuss in detail the specific new forensic sciences they are using, it is not afraid of going down narrative paths that give the show a grander context. Moments like Moore and Mary walking through a women’s suffrage protests never seem out of place nor are they made a huge deal but one sees the allusions.

This creative team continues to make the right moves giving us a show that is more than Cop versus Serial Killer.  So much so, that our first glimpse of said killer is at the end of this episode and may be the least important thing that happens. That isn’t just good TV that’s great storytelling.  The Alienist is quietly building to be a truly great show finding its footing and what it is as quickly as The Knick and True Detective did in their first seasons.