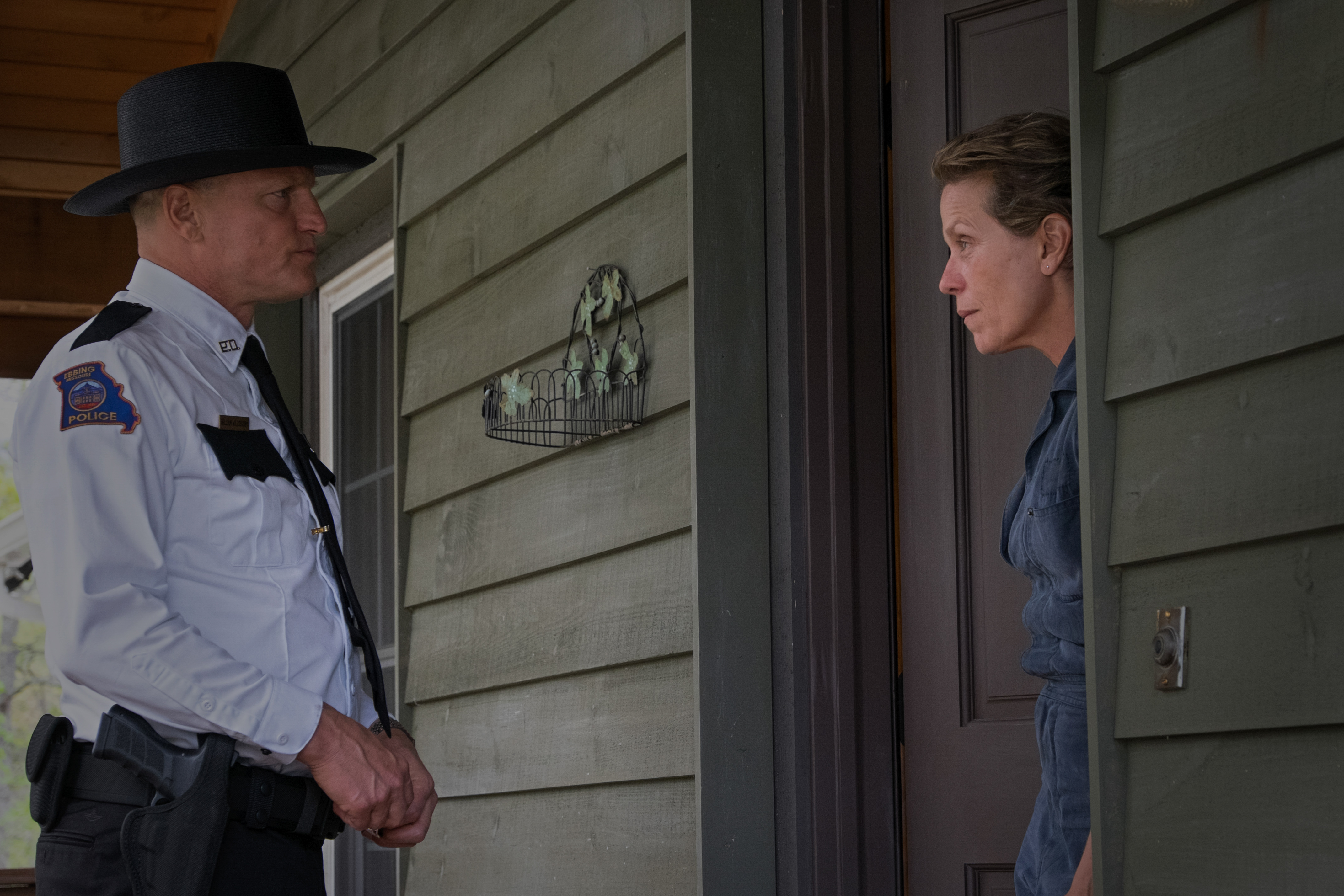 The adjective “angry” will be used to describe Martin McDonagh’s third feature film Three Billboards outside Ebbing, Missouri. That would be an apt description but not all together accurate one.  McDonagh with his third film has found a messy-life-as-it-happens heighten film reality that throws out the tight constructed plotting of his previous efforts in favor for a more episodic character study.  The film continues McDonagh’s fascination with violent acts as a looking glass to which to observe human behavior. Acutely observed, written and acted the film is a showcase for the dynamic powerhouse that is Frances McDormand.

The film opens nine months after the rape and murder of Mildred Hayes’ (McDormand) daughter Angela.  A crime that the Ebbing Police Department has not solved. Deep into the darkest recesses of grief Mildred finds a channel for said grief which has metastasized and bore anger; Three Billboards on a forgotten road. Those billboards coincidentally are located at the spot where her daughter was murdered.  These place holders for advertisers become Mildred’s weapon to affect the complacency.

This moment of resolute conviction begins a spiraling story of violence, reconciliation, misunderstanding and how we process and grieve.  Those expecting a typical standard mystery will be sadly disappointed to the point of frustration.  Three Billboards outside Ebbing, Missouri has no concern for conventional plotting standard to this typical Cold Case drama.  Rather McDonagh’s film hypothesizes catching the killer is secondary to those affected by this crime.

Three Billboards feels it’s operating under standard story conventions/troupes, the script will veer completely off those conventions/troupes.  Nothing here is easy nor are there any pat resolutions to the narrative.  Characters commit horrible acts in the name of their own fragile egos.  McDonagh never raises judgement.  The film shows an odd compassion for even the most morally corrupt of characters.

The script is designed to actively push buttons.  Gender politics, police violence, reactionary media, white privilege are all targets aimed by the film. This shotgun approach lacks the focus of McDonagh’s previous efforts and adds a socio-political element not found in In Bruges and Seven Psychopaths. The prior films superbly written, acted and directed as they were never were a critique of our culture and current political climate.  Three Billboards outside Ebbing, Missouri attempt to do just that.  McDonagh clinically peels away the Frank Capra/Norman Rockwell veneer of small town America to find an ugly violent culture at its rotted core. This critique that we have seen many times before is to what purpose and end?  This is where Three Billboards problems lay.

The first two thirds of the film are so well-observed giving us a perspective as acute and observed as we come to expect from McDonagh.  The final third of Three Billboards makes a choice to not fulfill genre conventions or any storytelling dictum.  It leaves with no true resolution but a giant mess of unresolved plot threads.  McDonagh could have left it as such because he was commenting on the very nature of crime and the people that it affects.  Unfortunately, this does not work for the film but against it.  Leaving most of what was observed and critiqued hanging in the filmic ether with no real indication of any revelatory point McDonagh is making sinks Three Billboards outside Ebbing, Missouri under its own weight.

Three Billboards outside Ebbing, Missouri is in theaters November 10th in NY and LA and expanding to theaters through out the month.