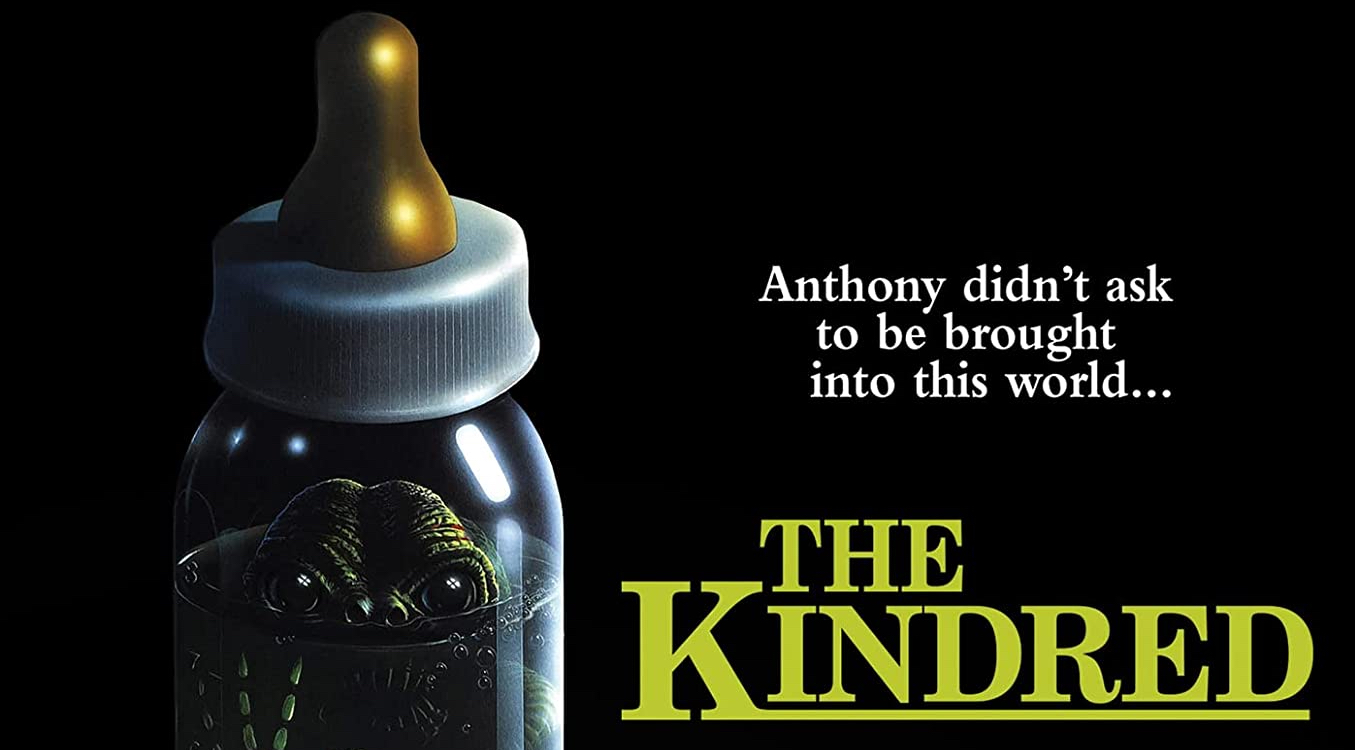 The gooey and effective cult classic The Kindred comes back in print thanks to Synapse Films we have a Blu-Ray loaded with special features and a new 4K Transfer.

The Kindred was something I absolutely missed when it was released and on home video.*  These things happen right?  Film fans are constantly discovering ‘new-to-them’ cult gems and oddities decades after release. I say this all because The Kindred was definitely my jam and have no clue why I’ve never really heard of it until now.

The level of enthusiasm that’s on display with the gross-out HP Lovecraftian-style story of research scientists helping one of their own John Hollins (David Allen Brooks) as he attempts to clear figure out his brilliant late Mother’s research.  Add in a shady – is there any other kind – Rod Steiger as Hollin’s boss and his Mother’s colleague doing similar experiments wanting her research.  As Hollins’ colleagues/friends stay the weekend at his mother’s abandoned home they quickly realize that they are not alone.  Maybe his mother’s talk about “your brother Anthony” was not as crazy as what Hollins’ brother actually is.

The Practical FX work here is the star.  The intelligent and effective use of creatures is the reason The Kindred is so successful.  If you’re a fan of copious amounts of goo and tentacles this is your movie.  The work here by co-director/cinematographer Stephen Carpenter is amazing.  It takes a true understanding of visuals and FX work to effectively pull off what The Kindred does.  Thought it also should be stated that the work of FX Artist Michael McKracken is as brilliant.  If either faltered none of it would have worked.   Now let us be clear here. It’s not THAT kind of tentacle monster movie.  Again, more Lovecraft and Carpenter’s The Thing and less Anime.

In answer to any Steiger fans out there… Yes, the legend does go hard but you can expect nothing less.  With his deranged wig and of course, the delivery of his lines (best in the biz besides Christopher Walken) the actor and the film effectively use his 10 minutes of screentime.  The other cast members from Brooks to Amanda Pays to Talia Balsam do acceptable work.  Kim Hunter’s cameo as Hollins wife is appropriately arched considering the tone of everything.

The Kindred is not just effective because of its visuals but the scale of the production.  Smart and effective use of miniatures and visual FXs gives the film’s finale a real push.  One that people will be surprised by.  In fact, those that haven’t seen the movie, like this reviewer, are in for an unexpected Halloween Treat.

*The reason why was that the film was held up in legal rights issues that Synapse worked very hard at getting untangled for release.

The New 4K high-definition remaster of the unrated version of the film is beautiful and damn near perfect.  Having researched and sampled the VHS version there isn’t a comparison.  As the film has never been released on Blu-Ray or DVD there is no reference.  The handsome image is sharp with no blemishes, dirt specks, or scratches anywhere on the image.  Synapse has done an amazing job of bringing the film to Blu-Ray with this remastered edition.

The all-new audio commentary with directors Jeffrey Obrow and Stephen Carpenter, moderated by horror journalist Steve Barton.  The trio begins by discussing the last time they have seen the film, including Carpenter who had not seen it since opening weekend.  Some of the other details include how they worked with Joseph Stefano, the Hitchcock connections through various crew and actors, the work of Rod Steiger, the work of FX artist McCracken and Munglo, the work and casting of Amanda Pays, their thoughts on why the film has such a the long-lasting interest and love for the film, how studio sets helped Carpenter with blocking and movement for his camera (he also served as cinematographer on the film), the infamous watermelon scene and how it was achieved, the sound FX and sound design in the film, their thoughts on CGI vs practical FX, the way that the film was funded with a sizzle reel based on the script, how they worked as a directing duo, how blood FX work is done in close up with a binary compound, the dealings they had with the MPAA, the surprising method they approached the fish transformation, and much more.  Barton does a great job of keeping the conversation going on this informative relaxed commentary track.

Inhuman Experiments – The Making of “The Kindred” (51:16) – is an all-new documentary chronicling the production of The Kindred.  Some of the details include Jeff Obrow and Stephen Carpenter meeting in college and making a feature in college, the genesis of the story and how it came out of a real life incident, the development and financing of the project, working with Joseph Stefano of Psycho fame, their relationship with Stefano, working at the Culver Studios – now the Sony Studios Lot, the various locations they worked at in and around Los Angeles, the casting of the film including Amanda Pays, John Hollins, the casting and anecdotes about the legendary Rod Steiger – who only worked for two weeks but left the crew with plenty of stories, the casting and anecdotes about Kim Hunter – who hated talking about The Planet of the Apes, the FX work and how Mungle and McCracken approached the work for The Kindred – they had previous worked together on Ice Pirates, the various issues that came with the FX work and how they were able to produce some of the great set pieces, the massive transformation of Amanda Pay’s character and how it was accomplished, the influence of HR Giger, the first screening of the assembly cut, the additional shooting for the finale – including some great Rod Steiger stories, how they got composer David Newman, Newman’s thoughts on the score, the release of the film, the after effects, and much more.  This is a truly wonderful making-of documentary that does a great job of accounting for the production and release of a film that’s become quite the Cult Classic and with good reason.  Comments by directors Obrow, Carpenter, co-writers/editors John Penney and Earl Ghaffari, actors Amanda Pays and David Allen Brooks, FX designers Matthew Mungle and Mike McCracken Jr, Composer David Newman, and much more.

Rare Never-Before-Seen on set Footage (17:52) – is b-roll on-set video footage shot by Michael McCracken Jr.  The 18-minutes of footage is edited together and presented without commentary.  What you get is some great behind-the-scenes look at the practical FX work being developed and shot on set.  Anyone that has a love of this kind of old-school FX work is going to love this.  This is similar to the footage that we’ve seen on sets like the 4K UHD of Child’s Play recently.

Original storyboards (3:23) – the set of storyboards is for the Anthony Attacks scene and is set to the David Newman score.

The Kindred has been treated with the respect and care that it deserves by Synapse.  HIGHEST POSSIBLE RECOMMENDATIONS!!!