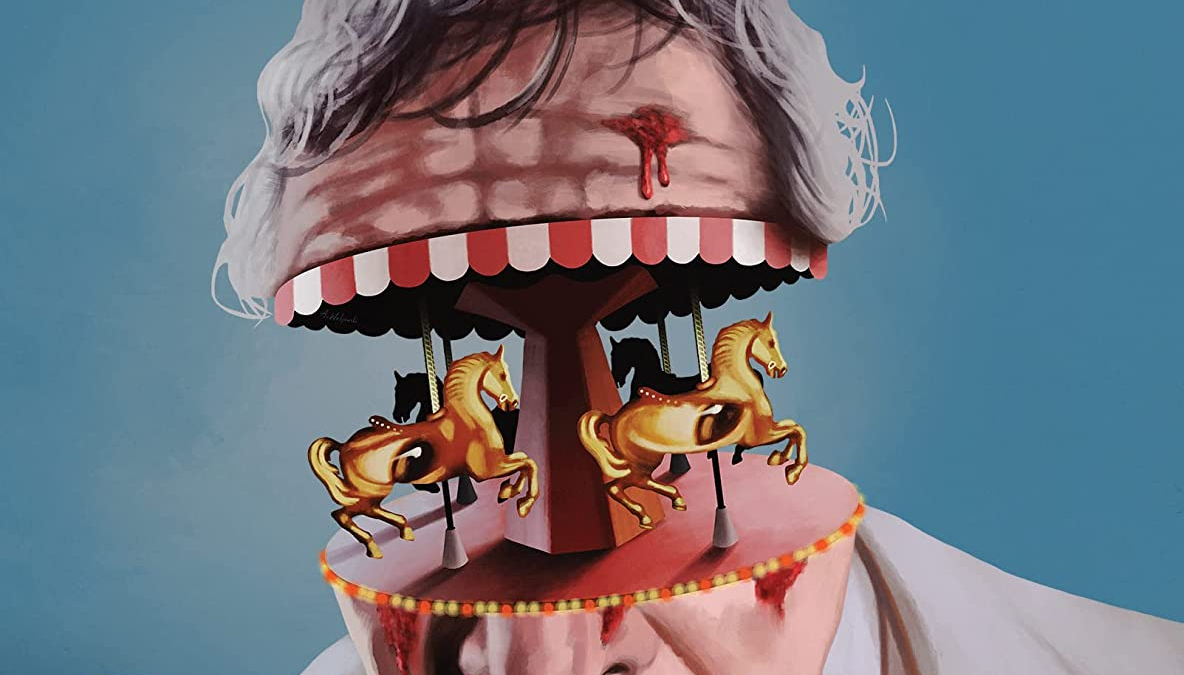 Director George A. Romero’s long-lost film The Amusement Park makes its debut on Blu-Ray with a 4K Restoration and special features.

The Amusement Park may not be a traditional horror film, but director Romero and screenwriter Wally Cook manage to make a truly acute and terrifying parable for aging.

Things like bumper cars, fun houses, house of mirrors, and even eating at this amusement park take on double and triple meanings.  As the younger citizens carry on with laughter and enjoyment of the park, the elderly couple we follow see nothing but terror and dread at every turn.  There is a bureaucrat or suspect person around the corner questioning everything they do.  The couple soon realizes that they’re second-class citizens that are either useless or called out for interacting with children.

Romero with cinematographer S. William Hinzman shoots everything like a hall of mirrors by way of an educational documentary.  The result is at times jarring as much as it’s the darkest of gallows humor.  The distance and tricks – both visual and auditory – are the same he uses in films like Dawn of the Dead but with different results.  The Amusement Park in Romero’s hands takes on the constructs of society in all their terror.  Everyone is helpless to its dangers though only those elderly citizens can see how the construct is designed to literally kill them or strip them of their place in society.

Although a brief 54-minutes The Amusement Park is as sharp and biting as anything Romero did in his career.

The 4K Restoration is an odd mix of good and bad.  Good because the image itself is clear of most of the scratches or any other issue that plagues an almost 50-year-old film.  The care and time taken to restore the image are impressive.  The bad is the image’s color seems to have faded as prints often do if not properly stored (this occurs even if properly stored).  The burnt orange hue that surrounds everything isn’t bad but isn’t necessarily what was more than likely intended.  All around the restoration given the condition the film when they began restoration – see the special features below for more on this – in is a minor miracle.  Regardless of color, the image is consistently sharp and handsome with its grain structure intact making for a beautiful representation of the 16mm image.

The all-new Audio Commentary with assistant cameraman Michael Gornick hosted by Red Shirt Productions owner Michael Felsher begins with introductions and Gornick discussing this was a Romero “Community Efforts” and in 1972 and where the production and Romero were.  Some of the other details include Gornick’s early days and how he got to work with Romero and began to work, his day in the Air Force and learned how to edit and sound during his time there, working on The Crazies, working on The Wife, how The Amusement Park came about through the Lutheran Church, working and being mentored by cinematographer Bill Hinzman – and the work Hinzman allowed and had confidence in him to shoot, a discussion of what Romero thought of the project as it was not developed by him in-house production, the casting and work of Lincoln Maazel – and his later work with Romero, a great discussion about George Romero as an editor at a time and his unique approach to editing, what the Lutheran Church thought of the end result, the other productions that they did after the success of this, the how and why we have not seen this film since its initial release, and much more.  Gornick because of how many roles he had during the production gives an amazing insight into this unique project. Felsher is a great host prompting great discussion points leading to an informative track.

Re-Opening The “Park” with Suzanne Desrocher-Romero (12:02) – in this all-new interview with Romero’s wife and collaborator and how the restoration came about.  Derocher-Romero discusses how Romero initially dismissed the documentary he was given as a gift as a 16mm and DVD rip of it as slight but how this and Romero’s passing prompted the creation of the fund and how this became the first project to restore.  The restoration process and the condition of the print – including samples of the film before the restoration.

Bill & Bonnie’s Excellent Adventure with Bonnie Hinzman (10:00) – in this all-new interview with Script Supervisor and Actor Hinzman discusses how she became involved with Romero’s company and eventually The Amusement Park – also how she met her future husband cinematographer Bill Hinzman.  Some of the other details include how she got the job at Romero’s production company, Romero’s mentorship of Hinzman who was a still photographer at the time, the production of The Amusement Park, her work as an actor, and much more.

For Your Amusement with Artist Ryan Carr (11:05) – Artist and George Romero Foundation Illustrator Carr discusses his work on creating a Graphic Novel of The Amusement Park.  Some of the details include how he got his job, the work he’s done for the Foundation with other Graphic Novels, his affection for Romero’s work, the work they are doing on the graphic novel and how it evolved and changed, and much more.

Panel Interview (23:12) – is a Zoom interview moderated by Shudder’s Samuel Zimmerman with Suzanne Desrocher-Romero, Sandra Schulberg, Greg Nicotero, and Daniel Kraus. Some of the details include how the film was not lost but “shelved” – in Desrocher-Romero view, how they viewed the film a few weeks before Romero’s passing, the only “work for hire” Romero did in his career, the work and challenges that Sandra Schulberg and her Indie Flicks did to restore this film – with only two 16mm prints, Nicotero’s own discovery of the film – how he did not know until recently, the political messages and themes in Romero’s work – and specifically here in The Amusement Park, Kraus – who worked on the Romero Night of the Living Dead novel – who discussed his first viewing and the importance of the film, and much more.

THE AMUSEMENT PARK Official Brochure – a bit of cheekiness from Romero and company.  They created an info sheet about the film masked as a travel brochure.

THE AMUSEMENT PARK Script – the 19-page document isn’t really a script in the traditional sense though it’s a fascinating look into how they constructed a document to follow.

The Amusement Park is a vital piece of filmmaking from George A. Romero, restored and brought back to life by Romero’s closest collaborators.  Shudder has filled this Blu-Ray with great special features giving context to this forgotten piece of horror.  HIGHEST POSSIBLE RECOMMENDATIONS!!!

Shudder’s Blu-Ray edition of The Amusement Park is out now.