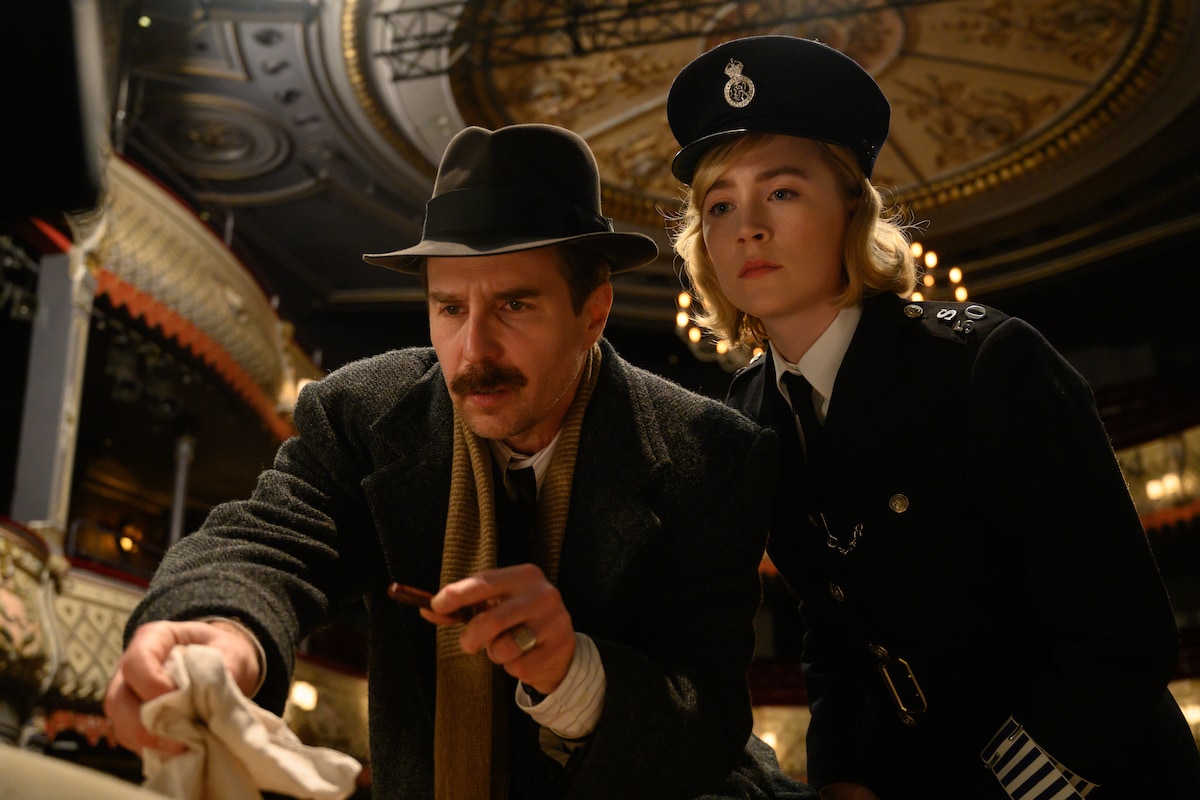 A clever twist on Agatha Christie’s specific type of Mystery as See How They Run takes Christie’s Novel turned to Play The Mousetrap and slyly adapts as much as it comments on the genre itself.

Sam Rockwell and Saoirse Ronan are front and center in the whirlwind of comedy and clues of See How They Run.  Director Tom George and Writer Mark Chappell create a slick adroit mystery that level of enjoyment will deepen with your love of the genre, the golden age of Hollywood, and the history of West End Theater.

After 100 performances The Mousetrap is still a raging success.  The stars led by Richard “Dickie” Attenborough (Harris Dickinson) couldn’t be happier.  Well, that’s not true.  Everyone has a gripe or some sort of bone to pick with Blacklisted Hollywood Director Leo Kopernick (Adrien Brody) and his brash womanizing ways.  So much so that Kopernick ends up dead during an after-party.  Enter Inspector Stoppard (Rockwell) who’s been tasked with solving the murder, and to help him Constable Stalker (Ronan) an eager and hyper-knowledgable busy body.

Anyone that loves a good mystery will instantly fall in love with See How They Run.  The film’s 93-minute run time breezes past without a hitch.  It is never rushed or ponderous but rather George and editors Gary Dollner and Peter Lambert find the right balance that allows for the film never to feel too plotting or by other turns too murky or unclear.  There’s a tone that recalls the Hitchcock thrillers of the 1940s with their witty characters and twists.  Part of the fun of Chappell’s script is that it adds layer upon clever layer of not just meta contextualization but adroit homages that never feel loud and obnoxious.

The script is aided by the magnificent ensemble cast led by Rockwell and Ronan.  The film manages to make the leads brim with chemistry without any sort of trite or cliché romance at its center.  Beyond the leads turns by Brody, Ruth Wilson, Reese Shearsmith, David Oyelowo, and Charlie Cooper are fantastic.  Though it’s Harris Dickinson as “Dickie” Attenborough and Shirley Henderson as “Dame” that steal the show.  Dickinson’s Attenborough is the right side of pompous and clueless.  Henderson in the few short minutes she’s in kills with a Roman à clef that will have any fan of the genre giddy.

See How They Run doesn’t require a working knowledge of this era of 1950s London and Show Business.  One will delight in its stylish and witty narrative that both sly parodies as much as lovingly recreates Christie’s narrative tropes and clichés.  Those that do have said knowledge of both will find much more both amusing and enlightening.

Either way, you fall as an audience member See How They Run is delightfully entertaining and charming.

See How They Run is in Theatres September 16th