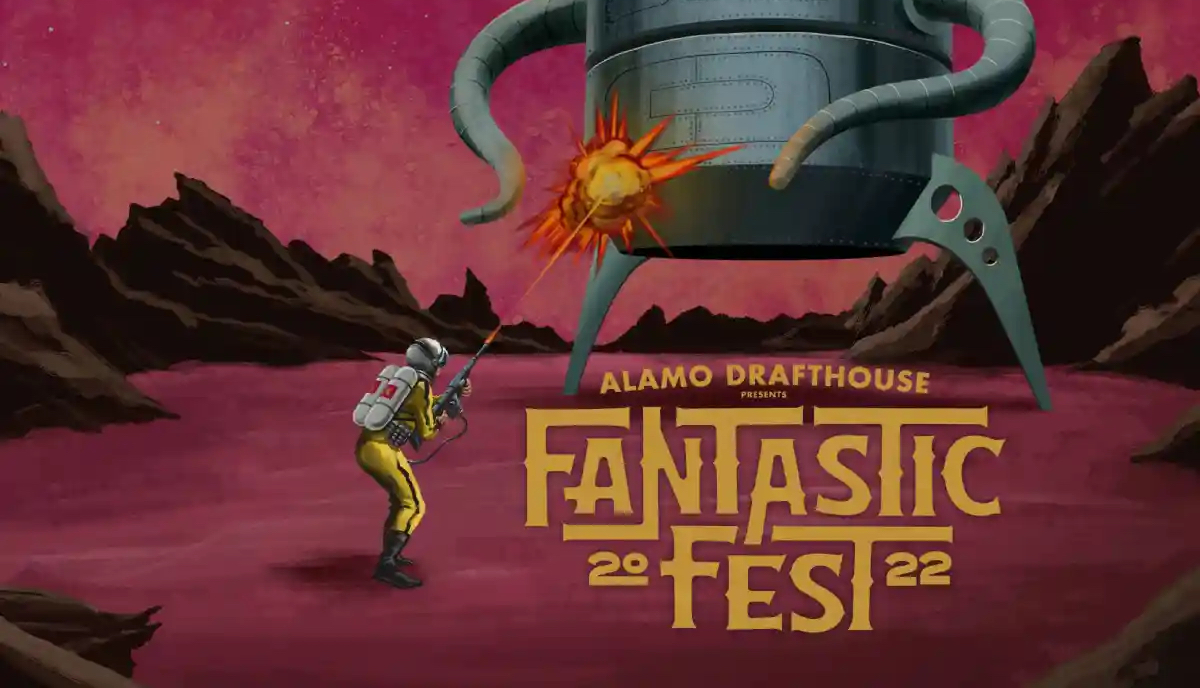 Adam talks about what we should get excited about at Fantastic Fest 2022.

I’ve watched from afar for the last two decades with a bit of jealousy.  But jealous and afar no more as I’m making my first pilgrimage to the Festival – as an accredited journalist to boot!  Here’s a taste of what I’m looking forward to and what you can look forward to from September 22nd – September 30th:

All you need to do is tell me something’s shot on 16mm and will be playing on a nice giant screen and I’m sold.  Add that this tale of an Art Broker Serial Killer luring a Museum Curator to his cabin which quickly turns from a fanciful daydream to a horrifying nightmare that takes its cues from Argento and early Raimi… I’m sold.

When your description is CON AIR set in a Shipping Boat you’ve sold me.  Add to the fact that Project Wolf Hunting is out of South Korea… add about triple the excitement.  There is few places producing more polished and dangerous action thrillers than South Korea (maybe Thailand or Indonesia).  This sounds like a gory-bloodletting good time.

A 1980s set Spy Thriller starring Lee Jung-jae (of Squid Game) would be enough.  The fact that this thriller was lauded out of Cannes for Lee’s stylish direction… makes it an even bigger must-see event on the big screen.  Praised for its densely plotted tale of a North Korean double agent in the midst of South Korean Intelligence sounds like a play on Tinker Tailor Soldier Spy but with the intensity that most Korean genre films bring to the table.

Jason “Hobo with a Shot Gun” Eisener is back with his second feature film.  With a plot that sounds like a demented Amblin 1980s Kid adventure gone sideways the Title as Plot isn’t what’s exciting.  It’s the fact that Eisener is back with a full-length narrative feature after his work on in horror anthology films (like V/H/S/2 and The ABCs of Death) and documentaries (his truly monumental work in Dark Side of the Ring – his look into the world of Professional Wrestling) has us chomping at the bit to see what he brings after over a decade since his debut feature.

Here on the site, we’re all suckers for the “Professional Driver” subgenre.  Whether it’s Walter Hill’s The Driver, Nicholas Winding Refn’s Drive, Edgar Wrights’s Baby Driver, or the recent Korean action thriller Special Delivery when done right there are few if any, subgenre’s more stylish and exciting.  This Belgian-based action comedy finds our hero Driver taking the wrong job and getting caught up in drugs, double-crossings, gangsters, mall cops, and of course werewolves!

The best part of a festival is the unexpected.  Those films that appear to come out of left field that everyone says are a “must-see”.  There is so much more to a festival than just booking your films.   It’s the experience of it all.  The ineffable and if there’s a place that the ineffable and milieu needs to be experienced – from what others have told me – it is Fantastic Fest.

So, get excited as you’re coming with us.  We’re going to be ground zero this year and that means you will be too faithful reader.  Yes, yes, we will get you all the coverage for the big ones too like The Menu, The Banshees of Inisherin, Decision to Leave, Triangle of Sadness, and the two Secret Screenings.  Though it’s the films that we don’t know anything about that we’re most excited about.  The excitement of seeing something truly transgressive or brilliant before anyone else does.  On the biggest screen possible…

We couldn’t be more excited to be juiced and kicked by Fantastic Fest.