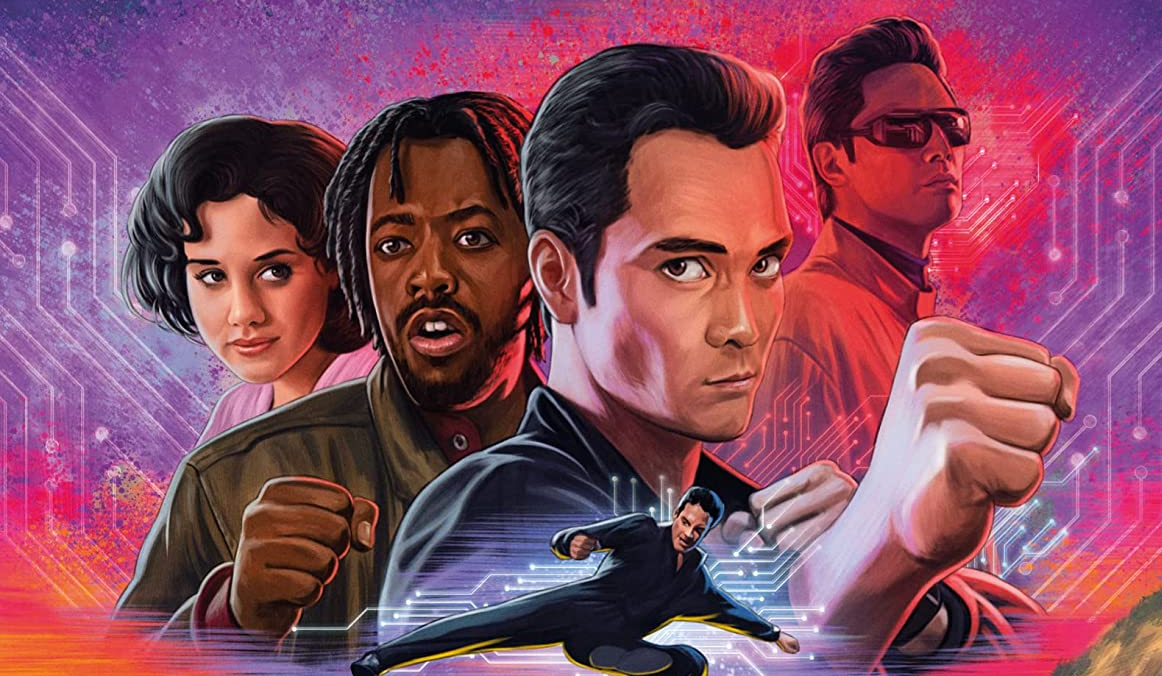 Those geniuses at 88 Films have done it again.  This time they’ve brought us the Cult Classic Marc Dacascos/Kadeem Hardison action-comedy Drive in 4K UHD Dolby Vision encoded glory – loaded with all the bells and whistles to boot.

There was a time in my life when I was a broke-broke-broke-ass Junior College bum that could barely afford gas and cigarettes.  I couldn’t even afford tickets to the movies.  This was before I became a movie theater projectionist.

They had their $0.99 rentals.  Just cheap enough to keep me in movies.  I gladly would grab anything that sounded of interest.  It’s where I rediscovered my love of action stars like Cynthia Rothrock, Sammo Hung, JCVD, and of course Marc Dacascos.

Drive was one of the first films that I found by luck starring Dacascos.  I knew of him from Only the Strong.  Only the Strong was a huge milestone for me and my friends.  Give us a movie about reckless students being taught by a tough teacher and we were sold.  Martial Arts… even better.  So, the choice wasn’t a choice with Drive.

The movie quickly went into the pantheon of my favorite B-Movie Action films.  Drive separates itself from other DTV films because not only do they care about the film they are making, but they’re also attempting to make the best movie possible.  Yes, the action is crisp and effective.  It has visual style to spare.  But it’s the chemistry between Dacascos and Kadeem Hardison that elevates the film above the doll drums.

In fact, the script by screenwriter Scott Phillips is always sharp and observed when it comes to its characters.  Actors like Tracy Walter, John Pyper-Ferguson, James Shigeta, and the late Britney Murphy all excel in their small but adroitly written parts.  Drive is at its best when the various characters are talking to one another.  Though the inventive HK-influenced action set pieces are nothing to slouch at.

The Dolby Vision encoding of a New 4K Scan of the Original Camera Negative is a true winner.  This new presentation is of the Director’s Extended Cut and also restores the Director’s preferred 2.35 Aspect Ratio.  The care and time spent on this new edition of Drive is night and day different.  The film not only looks better but feels like a completely different movie because of the adjustments made.  The image is sharper, and the range of the black levels is significantly higher.  Previous editions’ issues with blacks being crushed are no longer an issue.  The colors are deeper and more vibrant.  The grain structure is present and gives the film that extra push into a film-like quality territory.  All around it’s a marvelous transfer that fans and non-fans alike will appreciate.

The archival Audio commentary on Director’s Cut with Director Steve Wang, Fight Choreographer Koichi Sakamoto and Stars Mark Dacascos and Kadeem Harrison is a winner.  Led by director Wang the group provides a lively and informative track.  Beginning with the changes that were made to the opening and an explanation of how that cut they call “the HBO cut” which was essentially a producer’s cut.  All participants do discuss the differences and cuts that were made.  Not only beyond choices in editing but also score and source music.  Some of the other details include the stunt work done by Sakamoto and his great stunt crew – he does talk about how his stunt team came to be and was originally based in Japan, the car stunt/crash that went wrong, and the fix – a stroke of luck for an independent production, how Walter the Frog TV shows came about – its original incarnation and why it changed, the reaction Wang had after the first screening of the “producer’s cut”, the casting of Saana Lathan – and some hilarious stories about the other actors up for the role, the casting of Britney Murphy – and how they chose her, the various film units that were filming around the clock during the production, filming the hotel fight scenes – the troubles and additional photography, the influence of John Woo on director Wang’s style, how they achieved the hotel explosion, the work of Tracey Walter and John Pyper-Ferguson, the filming the Apollo 14 finale, and much more.  The track is an excellent informative and funny – including a specific commentator having gas as they record the track they are not quiet about.

Drive: Original Cut in 2K HD with optional English Subtitles (99:00) – included here as a bonus feature.  After one sees the director’s cut there really isn’t going back.  Beyond the small changes and edits the producer made, Drive, loses a lot of the nice character work and arcs that are built.  Make no mistake the original cut is what this reviewer initially fell in love with.  Though the director’s cut is far superior to the original release.  Bravo, to 88 Films for including this on the release.

Drive: The Force Behind The Storm (47:43) – this archival making-of-featurette uses EPK footage, B-Roll Video, behind-the-scenes photos, fight rehearsal footage, and interviews to create an entertaining and enlightening documentary.  The documentary covers Wang’s origins and how he pulled through the rank as a Concept Artist to eventually directing Drive.  All aspects are covered including development, preproduction, and production – including some great anecdotes about the production including set pieces and VFX, the troubles in postproduction, and eventually the release. Features interviews with director Steve Wang, producer Steve Leahy, and writer Scott Phillips, stars Marc Dacascos, Kadeem Hardison, editor Ivan Ladizinsky, fight choreographer Koichi Sakamoto, and others. The doc features some great footage from Steve Wang’s other features before Drive.

Highway to Nowhere – Jason Tobin & Drive featurette (20:00) – in this all-new interview with Tobin – who has been in multiple Fast films – discusses his experience in the film.  The actor begins with the fact that his part in Drive is essentially an extra.  The actor discusses his meeting director Steve Wang, star Marc Dacascos, his early work in Strange Days, his time on the set as an extra, his current work – including Warrior – and still wanting to work with Steve Wang in a fuller role, and much more.  Tobin though his role is essentially an extra, he gives a great interview as to what it’s like to really start off as a working actor and extra.

Six Deleted Scenes (8:42) – pulled from what looks like either a VHS rip or an ADVID edit.  The scenes include an extension of the going to Hardison’s character’s house, extended car ride footage, Britney Murphy in the garage, and the full clip from the Walter the Einstein Frog.

Interview gallery (24:30) – the gallery consists of EPK-style clip packages with the cast, director, and crew including stars Mark Dacascos and Kadeem Hardison, director Steve Wang, Second Unit Director Wyatt Weed, and Stunt Coordinator Koichi Sakamoto. There are title cards that indicate the various talking points.  Some of the questions include things like John Woo’s style as a reference point, how Dacascos approached teaching martial arts classes, what a 2nd Unit director do, Hardison’s story about specific directors loving the film, and much more.  Note, that this set of interviews is nicely divided up into chapter stops for each of the questions that the interviewee is prompted to answer.

Drive is a legit cult classic that should not be missed.  88 Films has treated it with the respect it deserves releasing it as its debut 4K UHD in the US.  HIGHEST POSSIBLE RECOMMENDATIONS!!!