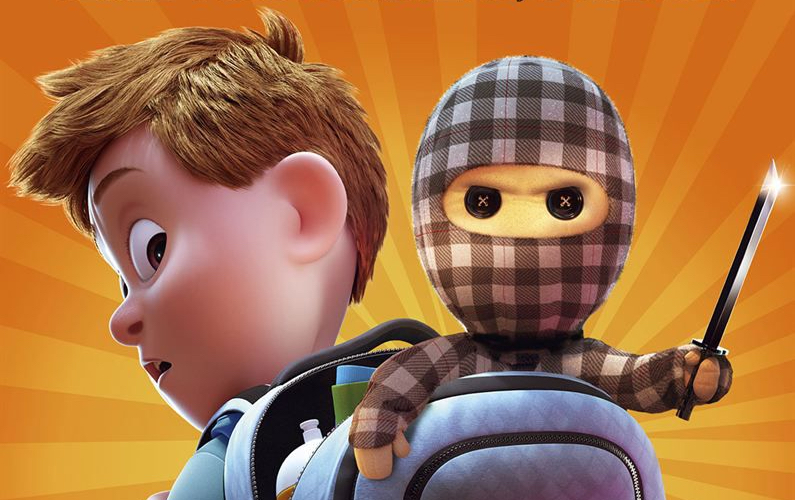 A possessed Ninja Doll is out for Justice in Checkered Ninja.  New to DVD.

The Danes are wild.  Evidence is in Checkered Ninja.  The film was a huge hit in Denmark playing for families and adults alike.  So much so that they made a Checkered Ninja 2.  Though after seeing Checkered Ninja, one will at the very least be curious.

Businessman Philip Eberfrø overseeing his Toy Sweatshop Organization in Thailand murders one of the young boys he’s exploiting.  Why?  He by accident took Eberfrø’s Burberry scarf and turns it into clothing for the toy Ninjas they are mass producing.  Eberfrø orders for the boy’s to be “taken care of” and thinks no mind of it.  Fates would have to do otherwise as the Checkered Ninja is imbued with the spirit of Taiko Nakamura – which we later learn is the avenger of wrongfully harmed children.

Through a series of misadventures, the possessed ninja ends up a present for Alex an unpopular 7th grader in Denmark.  Bullied by everyone from his step-brother to his step-father to the 8th graders at school Alex needs help.  Seeing the opportunity the Ninja proposes a partnership of sorts to Alex.  Alex is taught how to defend himself and maybe win the girl of his dreams and the Ninja can find Eberfrø to exact rightful vengeance.  Though the actual John Wick-style murder of Eberfrø may be too much for Alex.

This isn’t a film FOR kids.  This is a film ABOUT kids.  I want to make that clear.  Checkered Ninja makes no qualms with siding on the harder sides of things.  It does begin with the murder of an exploited child in a sweatshop.  The film is not the kind of G-Rated pap four-quadrant entertainment you find on the “Kids” section of a streaming service.  The script by co-director Anders Matthesen is the kind of story that Stephen King would have written circa 1984.  It’s that mixture of kindertrauma and unsanitized messiness the script adroitly infuses in a “kids adventure” that makes its – for those attuned to its charms – an unexpected delight of a film.

Checkered Ninja is better off for it.  It creates its own unique rhythm that throws even a causal viewer off the expected narrative norms.  Though never out of some crassness.  There is a genuine love and affection that shows throughout the entire film for the characters and the storytelling.  Co-Directors Thorbjørn Christoffersen and Anders Matthesen pull everything together from the truly fun and inventive set pieces to the care they take with their characters.  It comes together spectacularly in the mid-film set piece where the Ninja helps Alex defeat the school bully.

For those willing to take a chance, Checkered Ninja may just be their vibe.  Though watch it before you show your kids.

The DVD transfer nicely shows off the impressive animation work of the film.

Checkered Ninja is that wild blast of unexpected freshness from the “kid adventure” genre.  Recommended.

The DVD release of Checkered Ninja is out September 13th