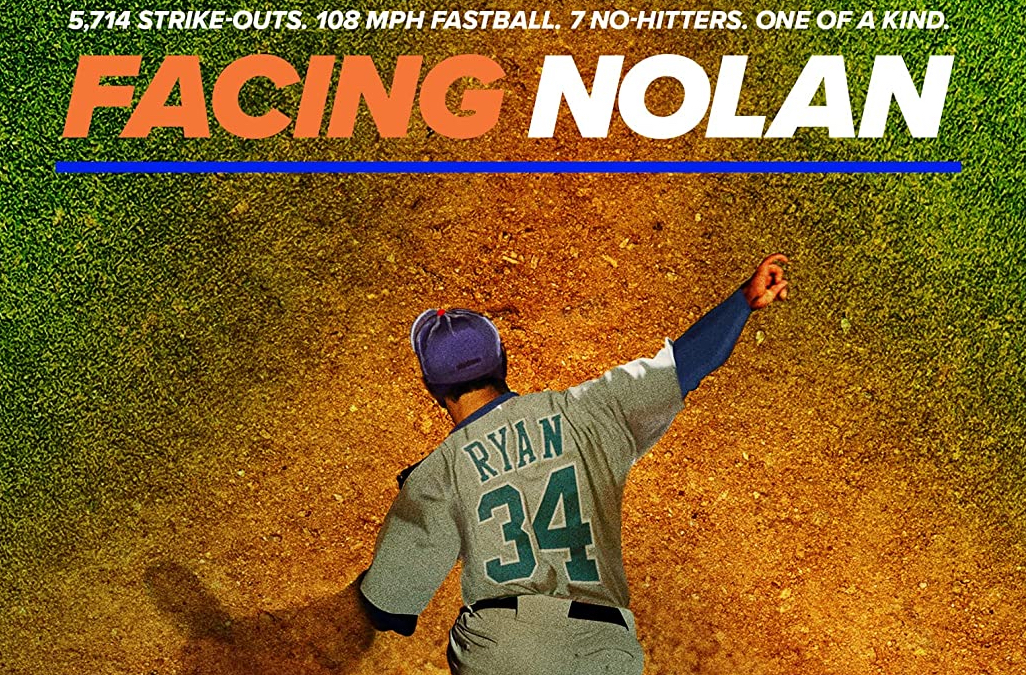 The Greatest Pitcher the MLB has ever seen gets a documentary/biopic in Facing Nolan.  New to Blu-ray from Utopia.

Every sport has a GOAT.  A single name that invokes an understanding they are beyond reproach.  Jordan.  Brady. Gretzky.

For Baseball it has to be Nolan Ryan.  Ryan’s decades as an elite pitcher with a heater that legend has it before they could track was upwards of 108 mph.  He owns every record a pitch could own.  Pitched his last no-no at 44 years old, which set his unbreakable 7-no hitter record.  He took on Robin Ventura (then 27) as he charged the mound and owned the whippersnapper at the ripe age of 41.

All of this and more is charted by the man himself and the players and people that knew him best in director Bradley Jackson’s documentary Facing Nolan.  Charting his meteoric rise from Texas to World Series Winning Pitcher for the Mets.  The documentary is not the sort of challenge to the myth of the titan but rather confirms and seals the legend.  Even the struggles are triumphs in Facing Nolan.

That is not to say it’s not entertaining.  Any fan with a passing knowledge of MLB will find merit in the documentary.  From his time in New York to the Angels to the Astros to finally settling in with the final part of his career with the Rangers.  The film does a great job of showing Ryan’s time with each team and never feels like a checkbox list of accolades.  Most of the greatest stories are told by the players he faced or played with.

By the end of Facing Nolan, if it isn’t clear that Ryan wasn’t just the greatest pitcher but the greatest baseball player, the doc shows you the list of his records as the credits roll.  It’s that impressive.

The hi-def transfer provided to Utopia is a winner.  The film features multiple visual sources from 8mm to 16mm to various eras of sports broadcast to photos to of course modern era Digital cameras and various aspect ratios.  These could be problems but there was care and time taken by the filmmakers to produce a beautiful image.  This translates to a first-rate Blu-ray transfer.

SXSW Q&A (9:02) – the post-screening Q&A held at SXSW featuring Nolan Ryan, Ryan’s grandson Reid Ryan, producer Russell Wayne Groves, and Director Bradley Jackson. Some of the details include how The Last Dance inspired Jackson to take on Nolan Ryan, interviews that they didn’t get, a humorous anecdote about President Bush (GW), the speed at which the film came together and was produced, Ryan’s love/friendship/adversarial relationship, and more.

The Pitching Ninja Panel (66:45) – Rob Friedman hosts a Zoom Call with director Bradley Jackson, Star/Hall of Famer Nolan Ryan, and Pitching Coach Tom Haus.  Some of the details include what drew Jackson to make a documentary about Ryan, Ryan’s respect for particular hitters – people like Willie McCovey and Hank Aaron during his Mets days, what drew Haus to help Ryan as a pitcher, Nolan’s changeup being as important as his heater – and how much he began to use it later in his career, and more.  This hour-long Q&A is both filmmaking and baseball centric satisfying either fans of either category.  The Zoom meeting is quite well managed with both the audio and visual components rarely if ever having an issue.  In fact, this may be the best Zoom Q&A this review has seen.

Facing Nolan clips (2:35) – a series of 4 20-second clips taken from the film that was used for Social Media posting.

Facing Nolan is required viewing for any sports fan.  Recommended.

Utopia’s Blu-Ray Edition of Facing Nolan is out now