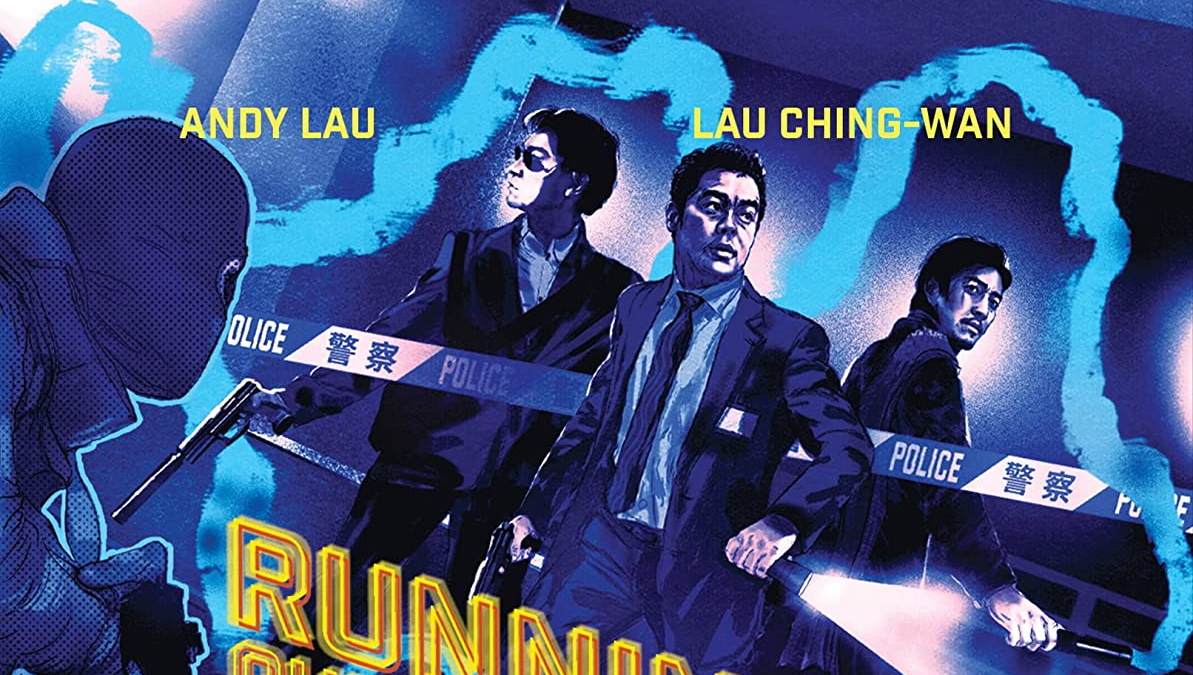 Running Out of Time and its sequel show director Johnnie To at his most nimble and entertaining.  The Crime Films make their US debut on Blu-Ray courtesy of Arrow Video.

Running Out of Time

There was an era where the only way to get to see the best of the best of Asia cinema was to either try to import or bootlegs.  Oftentimes, the second-gen DVD rips were better than anything that Miramax (who at the time seemed to be one of the few studios buying the rights to the films) and their cut-to-pieces terrible edits had to offer.  By the time Running Out of Time came out, I was a huge Johnnie To fan.  It was a tall order to match but… Running Out of Time delivered in the cleverest of ways while still managing to imbue some heft like most of To’s best work.

The conceit of a criminal mastermind (Andy Lau) playing a game with a grizzled Police Detective/Hostage Negotiator (Lau Ching-wan) is something we’ve seen before.  Die Hard with a Vengeance comes to mind.  It’s never quite been done in the way that Johnnie To does it.  Running Out of Time feels like a John Woo heroic bloodshed film he never made. The way that the Criminal and Detective circle one another with admiration and love feels like The Killer and Hardboiled.  Even the mid-film chase scene that ends with both parties bruised and battered plays out like a scene out of a rom-com more than an action thriller.

As with all To films, there is an undercurrent of melancholy and emotion that turns into a wellspring by its end.  The final moments of the film are both joyous, sad, thrilling, and quite funny.  Or simply put… Running Out of Time through and through is Johnnie To at his best.

Running Out of Time 2

Sequels are hard.  Even harder are sequels that lack the required elevated charming co-lead that makes it so memorable.  The conceit of Running Out of Time in itself is a one-off concept, much like Die Hard.  The more it is used the less effective it is.  Smartly, Johnnie To’s film sidesteps this by giving us something that considers the sequel and the repercussions of the events of the first film.  Screenwriters and To have concocted an adroit sequel that has the criminal/magician (Ekin Cheng) not just facing off against our reluctant Hostage Negotiator (Lau Ching-wan) but the entire department including his inept boss (Hui Shiu-hung) and gambling-addicted counterpart (Lam Suet).

Running Out of Time 2 plays with specific set pieces and concepts of from the first film but skewers them just the right amount.  There is still the mid-film chase but it’s less about friendship and mutual respect as in the first as its drive to catch essentially a copycat.  Part of the fun of the sequel is Lau Chin-wan’s character’s refusal to engage, like a mother walking away from a screaming child at the department store, and how Cheng’s character finds a way to pull him in.

Of course, the sequel makes everything bigger at the end but it’s done with that tongue firmly planted in cheek that even the most jaded of audience members won’t mind.  As sequels go this fall into the group of well-thought-out and thoughtful second films and not the rehashing crass cash-in.  If anything as the final credits roll on Running Out of Time 2, with its CGI Bald Eagle, one will want more set in this specific world.

One could not ask for anything more.

Both Running Out of Time and Running Out of Time 2 make their Blu-Ray debut here in equally praiseworthy transfers.  The images are both sharp, colorfully handsome images.  The films shot and released a year apart, are aided by this fact, as both look consistently similar (more than likely as they were both shot and developed using the same camera systems and post-production facilities/processes).  The images respectively are beautiful with both neon-soaked night scenes and brightly lit downtown Hong Kong scenes being no issue for these transfers.  Note that Arrow Video has wisely spread the two films over two separate discs allowing for the highest bit-rate possible for the transfers.

DISC 1 – RUNNING OUT OF TIME

The all-new audio commentary by Hong Kong film expert Frank Djeng begins with his bondafines and the success of Johnnie To’s film and the acclaim and awards it was nominated and wins at the HK Film Awards.  Some of the other details include a history – both personal and professional – of Johnnie To as a director, a personal and professional history of star Lau Ching-Wan, a personal and professional history of star Andy Lau – and a recent incident that also took his life, the work of editor Andy Chan and his collaborations with Johnnie To, the makeup FX work done in the film and the Canadian FX House that brought them to screen, the work of cinematographer Cheng Siu-Keung – and his collaboration with Johnnie To, Johnnie To’s love of Akira Kurosawa and the visual references he’s left in this film, how this film is a part of an official trilogy of films – not the sequel – that To directed, why it was so difficult to make this particular film, the big car chase scene and shoot out – how its constructed and how it fit thematically in the film, the comedy of the film and in Johnnie To’s career in general, the work of actor Yoyo Mung – and her connections to the sequel thought she doesn’t appear in it, some of the LBGTQ themes used in the finale and the rest of the film, and much more.  Djeng’s track is another winner, bringing his deep knowledge of HK Cinema and the work of Johnnie To to this very entertaining and informative track.

The second audio commentary is an archival one by writers Laurent Cortiaud and Julien Carbon, moderated by Hong Kong film expert Stefan Hammond. The screenwriters Cortiaud and Carbon begin with the success of the film and Andy Lau winning Best Actor at the HK Academy Awards.  Some of the other details include Lau’s status as a huge actor and an even bigger Musical Superstar, the bank robbery exterior set is actually the Production Company’s (Milky Way) offices, the development of the project and the work they did, how the script was translated [into Mandarin] and how that affected the end product, a discussion of Makeup FX work – that was done by an American Company, the troupes of HK Genre cinema and how the screenwriters and director To leaned into them and sometimes twisted them, the development during the time that The Negotiator was release, and more.  Hammond is a great host prompting Cortiaud and Carbon with questions and information that many – even HK Cinema fans – may not be aware of.  A great informative and entertaining archival track.

Note: these archival interviews appear in a submenu called interviews.

Julien Carbon and Laurent Courtiaud [2003] (21:57) – Archival interview with screenwriters. Some of the details include how they met Johnnie To, how the film came together both creatively and financially – including how they were able to cast Andy Lau, how the script changed once Lau was hired, To’s obsession with Michael Mann’s Heat and how it translated to the film, and much more.  In French with English Subtitles.

Julien Carbon and Laurent Courtiaud [2005] (37:09) – Another archival interview with screenwriters.  This one done for a UK release has the writers talking English and covering some of the same ground covered in their 2003 interview.  Some of the details include how much input they had during production, working with Andy Lau and Lau Ching Wan, being nominated for the HK Film Awards, and much more.

Lau Ching-wan (25:19) – Archival interview with the star.  Note that Lau does shift back and forth between English and Mandarin throughout the interview but the subtitles do remain.  Some of the details include how he was cast in the film, working with Andy Lau, filming the Bike Chase, which movie he liked more – his answer is hilarious, the way that Milky Way Productions were filmed, Lau’s take on the HK Film community as a whole – in 2010, his future as a director or producer, and more.  English and Mandarin with English Subtitles.

Raymond Wong (27:42) – Archival interview with the composer.  Note the interview was filmed in a very busy restaurant.  Some of the details include Wong’s immigration to Canada and back to HK, why he came back to HK after he graduated from university, getting involved with Milkyway productions, working with Johnnie To and his reference points – and a few funny anecdotes about their collaboration, his work on Shaolin Soccer, his future as a composer, and much more.

Image gallery – the gallery consists of 31 different production stills, posters, lobby cards, and marketing materials.  The gallery can be navigated by using your Next and Back Chapter Stop buttons on your remote.

The all-new audio commentary by Hong Kong film expert Frank Djeng begins his companion commentary track to the original with the differences between behind-the-scenes crew changes (including a co-director) and the success of the film.  Some of the details include the use of the Bald Eagle (its mostly CGI) – why it was used in the in the film, Johnnie To’s use of sets/location close to his production offices – which leads to a larger conversation throughout the commentary track about the various locations used, a personal and professional history of actor Kelly Lin, To and his production company Milky Way’s love of casting non-professional actors, the various actors that have returned to the film and how they’ve changed in tone and also characters, the cultural relevance of ABC (American Born Chinese, also a reference of anyone born outside of HK or China) both here and in Hong Kong/China, a discussion of audiences in HK reception of the sequel – which was less warm, Djeng’s insistency and discussion of his love of the sequel, the chase scene in the middle of the film, gambling in the film – which leads to a larger discussion of gambling supersessions and gambling in general in HK, the Queen’s Pier and the finale – its historical importance and the drama that happened post-filming, and much more.  Djeng provides another enlightening, entertaining, and thoroughly researched commentary track.

The Making of ‘Running Out of Time 2’ (5:46) – is an archive featurette that’s more of an EPK package discussing the plot and characters of the film.  It does feature some great b-roll footage – something we rarely see of HK/Asian releases Stateside.  Mandarin with English Subtitles.

Hong Kong Stories (49:45) – is a documentary from 2003 about Hong Kong cinema featuring the French Screenwriters Julien Carbon and Laurent Courtiaud’s experience as writers in the HK film industry.  Using B-Roll footage that the writers shot and interview footage the featurette gives us a ground-level look at the writer’s experience working with HK Legendary Creatives like Wong Kar-wai, Tsui Hark, Daniel Lee, and Johnnie To.  French in English Subtitles.

Image gallery – the gallery consists of 30 different production stills, posters, lobby cards, and marketing materials.  The gallery can be navigated by using your Next and Back Chapter Stop buttons on your remote.

Arrow Video has put together a great package for Running Out of Time 1 & 2.  Highest Possible Recommendations!!!