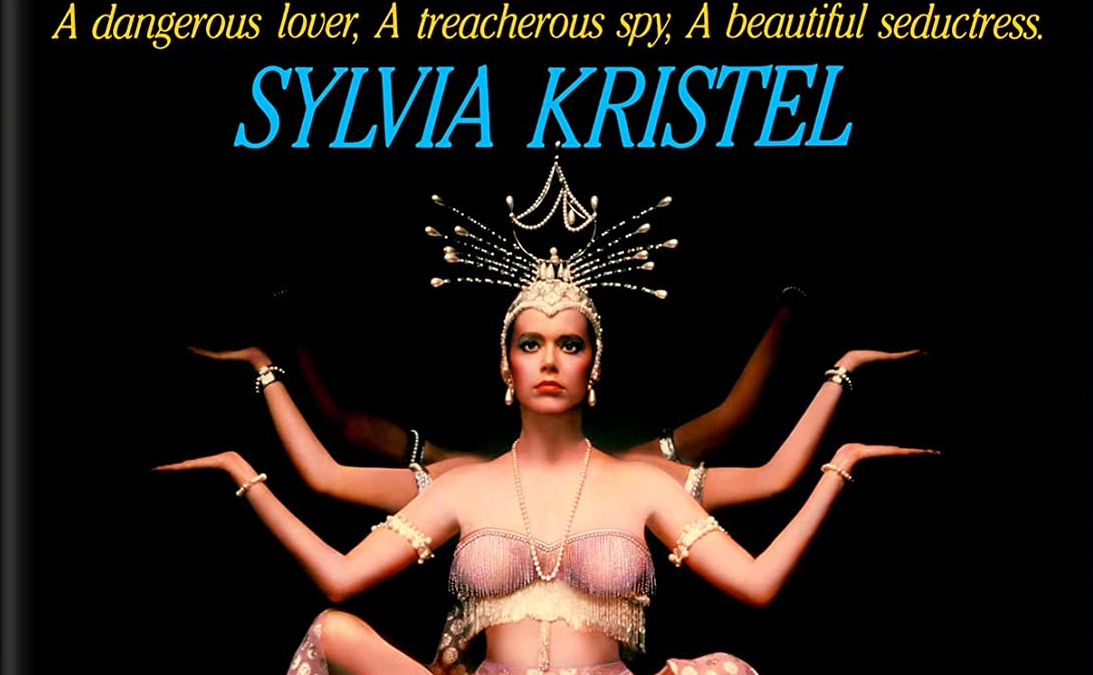 Cannon Films and Sylvia Kristel team up to bring the infamous WWI spy Mata Hari to the big screens with interesting results.  New to Blu-Ray from Kino Lorber.

Cannon Films was something.  In a strange way, they feel like the precursor to mini-majors like A24, XYZ Films, and Annapurna where the studio heads want stars to draw crowds but also want to continue to make films with prestige or at least an elevated sense of genre.  The only huge difference is that Cannon was in the middle of the cocaine-fueled 80s where even the worst ideas on the right day with the right amount of coke could get greenlit.  Case in point, Mata Hari starring Sylvia Kristel.

The film wants to desperately be BOTH softcore erotica and a historical wartime thriller.  Unfortunately, neither quite works successfully as director Curtis Harrington so desperately wants it to.  Though taken in pieces there are some truly interesting moments in Mata Hari.  Like the finale, a sustained 20-minute set piece involving a bomb set in a church.  The action once set in motion is efficient and lean with some great – albeit awkward – mini-set pieces.  The finale manages to imbue some urgency and emotional heft to everything even as stone-faced Kristel seems to let nothing – the death of her lover, the fact she is going to be executed – bother her.

Though Kristel shouldn’t be blamed.  Offered a lot of money, and a shot at legitimacy enticed the actor into the role.  One can only imagine after the Go-Go Boys (aka Golan and Globus) had conned her into a bill of fake goods she shrank away and copped the only way she knew how.  As a result, the film seems weighted down and somber in a way that no one intended Mata Hari to be.

Mata Hari may be a failure, but one wonders if the right combination of creatives (Just Jaeckin, anyone?) with the same concept and production could have produced something better.  In some respects, the film has it together but those aspects of the film that count the most fall apart.

The transfer provided by MGM is generally a solid-looking sharp image.  The image is colorful and reflective of its 35mm origins.  There is a bit of dust and dirt present but this could only be resolved with a full-on restoration as the said artifacts are inherent within the print itself.

The all-new audio commentary by Film Historians David Del Valle and Nathaniel Bell opens with their bonafides and their love of the film.  Some of the details include the various versions of the story of Mata Hari, how this is different from director Harrington’s usual film work, the conditions that Golan and Globus caused for Harrington in the usual Cannon fashion, the development of the script, a historical account of the real life Mata Hari, the various versions of the film that were released, the international cut of the film and its popularity in Europe, Del Valle’s admission that he worked for Cannon as a reader specifically reading scripts for “the Chucks”, the work and personal life of Christopher Cazenove, a great side conversation about Classic Hollywood Stars and Director’s that Harrington came in contact with that discusses larger changes in the 1950s and 1960s for major stars of the 1940s, the various film projects that Harrington wanted to do post-Mata Hari including something that Harrington wrote after seeing Friday the 13th, an interesting fact about Kristel and how she was almost cast Last Tango in Paris and also Blue Velvet, its homevideo’s life and its showings on the Z-Channel, the personal history of Sylvia Kristel through out of the track, accounts of Harrington by both Del Valle and Bell, and much more.  Del Valle and Bell deliver an entertaining and informative track about the film and its star.

Image Gallery (13:16) – the gallery is filled with over 159 production stills and poster art.  The gallery will play automatically, and you can pause on images.  Unfortunately, there isn’t navigation to allow you to move through the gallery at will.

Kino Lorber’s Blu-ray edition of Mata Hari is entertaining and more so with the commentary track by Del Valle and Bell.