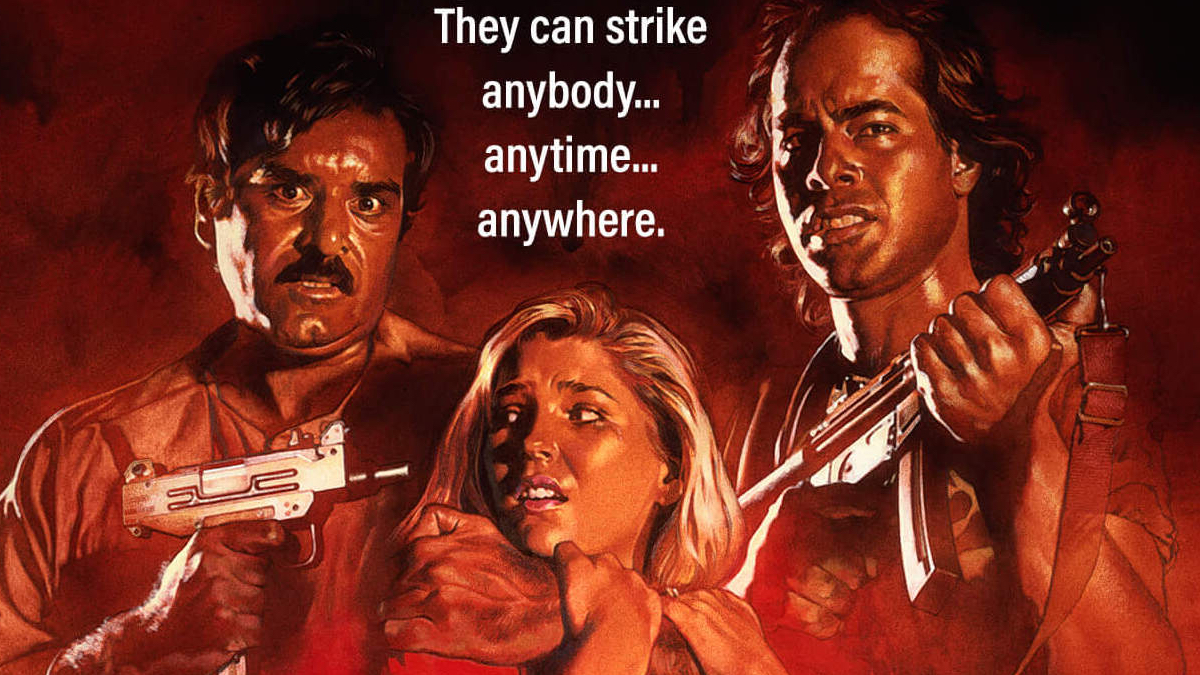 Do you know how crass a film Terror Squad is?  At the end credits, they have extras listed as “Victims”.  That’s how crass.  The Chuck Connors staring action film is as wildly inappropriate as it’s dumbfounding.

Terrorists plan a plot to car bomb a Nuclear Power plant in Kokomo … Indiana.  Yeah, that’s right.  Thankfully these nitwits can’t seem to do anything successful except smuggling guns into the country.  When that goes wrong because… you know ineptitude these guys head into town where bigger nitwits and dunces await them.  There to stop them… Chief Rawling (Connors) is probably more at home harassing locals he deems “unworthy” than he would be at stopping any real crime.  Rawling is so inept that when he does indeed catch up with these terrorists during a car chase… he runs over a victim the terrorist killed.  That doesn’t matter because he’s got cool mirrored shades and a jacket that says Brooklyn on it.

Rather than steer these terrorists away from the population Rawlings and his cabal of morons lead them to the local high school where a group of students are waiting for the terrorists for the taking.  Once hostages are procured what transpires can only be described as a law enforcement cluster fuck of epic proportions.  Rawling is responsible for no less than five deaths as his ineptitude causes the terrorist to kill hostages. No matter at the end of the day it’s up to the High School Nerd and High School Rebel to save the day.

At every turn, Terror Squad makes the absolutely wrong storytelling decision.  Even for a film released in 1987 the script by Chuck Rose is a blueprint for disaster.  There is a reason why films make their leads fairly competent.  Terror Squad is a case study in characters that are inactive and incompetently move through a narrative.  Connors as Rawling is an absolute joke emoting and acting with the prowess of a marble bust.  Shocking for this reviewer as Connors is so good in a recently reviewed release High Desert Kill.  The script and direction fail the actor at every turn. Nothing he’s given to do or say amounts to any piece of drive or action.

It is fascinating to watch everything unfold and wonder how this got past any creative producer that thought any of this made for compelling storytelling.  My only guess is that the initial script by Mark Verheiden was a bit of a banger.  Something akin to the Chuck Norris film Invasion USA.  Somewhere along the line credited screenwriter Chuck Rose, and director Peter Maris took over and twisted and contorted what was more than likely a clever script into the needs and wants of its Star and Director.  That “forest from the trees” lack of foresight resulted in a film that has some great stunt work narratively flaccid.

All that being said, Terror Squad is quite entertaining.  A massive mess that has no understanding of what an audience wants or even the basic storytelling needs of a story like this.  Like the rocket launcher that plays such an integral part of the story.  Its function in reality is quite dangerous and can only fire one.  In Terror Squad this rocket launcher has a never-ending supply of rockets that can explode with various magnitudes of power – as it serves the story.  Terror Squad picks and chooses its reality and story logic at will like said rockets.

The brand new 2K Master is a handsome sharp reproduction of the 35mm image.  The image is always clear, bright, and colorful without any issues.  There are a few specks or dirt but that is to be expected from an older film finished photochemically – as was the case here.  Strike up another win for Code Red.

Interview with Actor Kavi Raz (3:38) – this is an all-new interview with the actor who begins with his origins and discusses what he remembers of the production of Terror Squad including working with the legendary Chuck Connors.

Terror Squad has some great stunt work and some strange storytelling ideas.