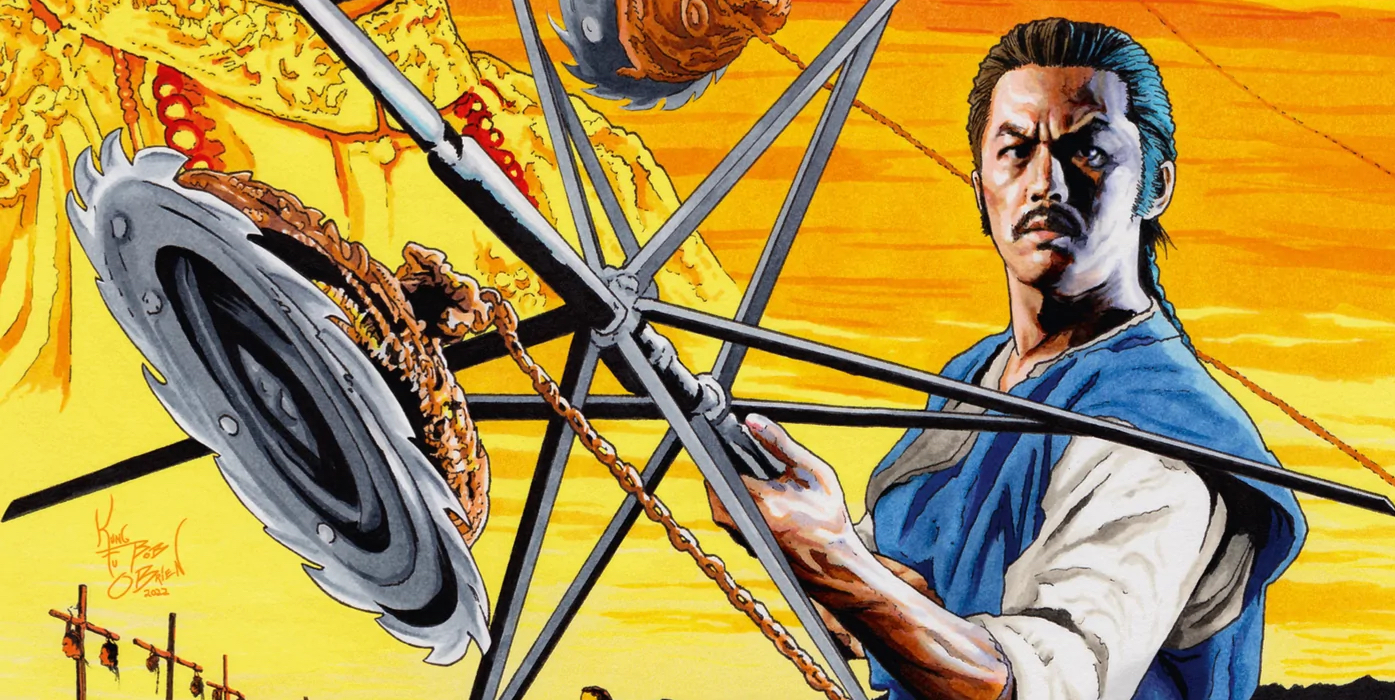 The mad geniuses at 88 Films are at it again with the US Blu-Ray Debut of Flying Guillotine II… and don’t worry, you don’t need to see Part 1 to understand the badassery.

This later era Shaw Brothers production is the standard Evil Emperor (Ku Feng) is a psychopath in royal clothing.  He wastes no time in dispensing death at every turn to anyone – including concubines – that he feels go against his will.  Remind anyone of anyone recently in power???  This tyrant cannot just be simply elected out of office.  He must be taken down.  How does one do that when his devoted men not only possess the power and skill of the flying guillotine but have the newest upgraded version that has two guillotines!!!  Ma Teng (Ti Lung) and his band of rebels have one shot at overthrowing the evil lord.  One that will take precision, timing, luck, and most of all buckets of blood.

Not really a sequel to Jimmy Wang Wu’s deliriously delicious The Master of the Flying Guillotines but retitled one.  The original title for Kang Cheng and Shan Hua’s film was Palace Carnage – which may be the most apt title.  Kang and Shan’s film is mercilessly brutal showing us the human toll the Emperor’s blood lust and paranoia takes on everyone, not just the rebellion he is trying to squash.  At just under 90-minutes, the film is very much lean and mean – emphasis on MEAN.

That is not to say that the film is a revolving door of meanspirited action scenes.  Chueng’s film which he co-wrote understands in order to have truly great triumphs you must have a worthy villain.  Flying Guillotine II is also adroit enough to have its hero work with a group of female let rebels that the Emperor in all his arrogance would doubt.  The movie also understands the moment to release the plot mechanics and let the action, martial arts, and guillotines – literally and figuratively – fly.

By the blood-soaked embattled ending if you’re not as big a fan of Flying Guillotine II as you are of Jimmy Wang Wu’s The Master of the Flying Guillotines then you really aren’t a fan of great Kung-Fu (cinema).

In fact, your (taste in) Kung-fu is only so-so.

The HD Transfer from the Original Negative is a gorgeous transfer.  This is one of the Celestial/Majestic Film transfers, so the original coloring and titles have been replaced by newer cleaner ones.  The handsome sharp image is as clean and flawless as the day it was produced. Many will critique the grading on the transfers but what we get in return and the fidelity of the image is just too good in a way that any of the Shaw Bros Studio films have looked.  The sharpness, the black levels, and the contrast levels are perfectly rendered here.  88 Films’ work continues a fruitful relationship with Majestic Films/Shaw Brothers with these beautiful Blu-Rays.

The newly recorded audio commentary by Mike Leeder and Arne Venema has the duo back with another entertaining and informative track.  The Leeder and Venema begin with a discussion about the original title(s) and a discussion of when a sequel isn’t a sequel as with the case with Flying Guillotine II.  Some of the details include the truly hilarious and entertaining behind-the-scenes troubles and tomfoolery that occurred making this, the myth of the flying guillotine including a discussion of the Myth Buster episodes where they tried to create the weapon, the various films that the weapon appeared in, a discussion of the work and career of actor Ti Lung, a discussion of the work and career of actor Ku Feng, the lack of distribution and merchandise of Shaw Brothers films outside and inside of HK and some of the deals they did, the lack of respect for their own history that Shaw Brothers had and lack of interest writ large for HK Cinema History, connections in this film to the amazing Riki-Oh: The Story of Riki-Oh, a conversation about “opium pipes” and their collectability in Hong Kong and China, this leads to a cultural differences in Asia about smoking in general and a hilarious anecdote about Woo Ping, the productions having two directors during production – Kang Cheng and Shan Hua, a great side conversation of the wild titles in Taiwan, what the anti-flying guillotine and how it was created – it’s hilarious, the logistics of the double flying guillotine, the lack of traditional scripts on Shaw Brothers Production which lead to room to create some interesting changes in story, a hilarious idea for an mobile app game, the difference in HK and China what the Action Director actually does and what they’re responsible for, a discussion of the work and career of actor Nancy Yen, a larger discussion about female action stars and female action stars, a discussion of the career and history of producer Mona Fong, a hilarious conversation about the crazy weaponry and accuracy that Leeder had with Jackie Chan, a moment about Prince, the visual difference between certain shots in the film, that leads to a great side conversation about the terrible Pan & Scan of films and TV and also the reverse where features/TV that are letterboxed when shouldn’t, the palace guards that are featured prominently and their comparisons to Rosencrantz and Guildenstern, a discussion about Ti Lung and some interesting anecdotes and larger discussion to the stars of the Shaw Brothers films and HK cinema, a discussion about Corey Yuen’s part in the film and some pretty great anecdotes about his English, and much more.  Leeder and Venema have recorded another winner with this track. The one is a tad funnier than the other tracks they’ve produced because of the delirious nature of the concept at the center of Flying Guillotine II.  Though the track still has their patented brand of deeply researched information mixed with personal entertaining anecdotes.

Hong Kong Trailer (3:33) – a great reference point for people wanting to see the night and day difference of restoration done by Celestial for these releases.

Stills Gallery – The gallery consists of 16 beautiful production stills and 1 image of the original poster.  The gallery is navigated through your remote’s Next and Back chapter stop buttons.