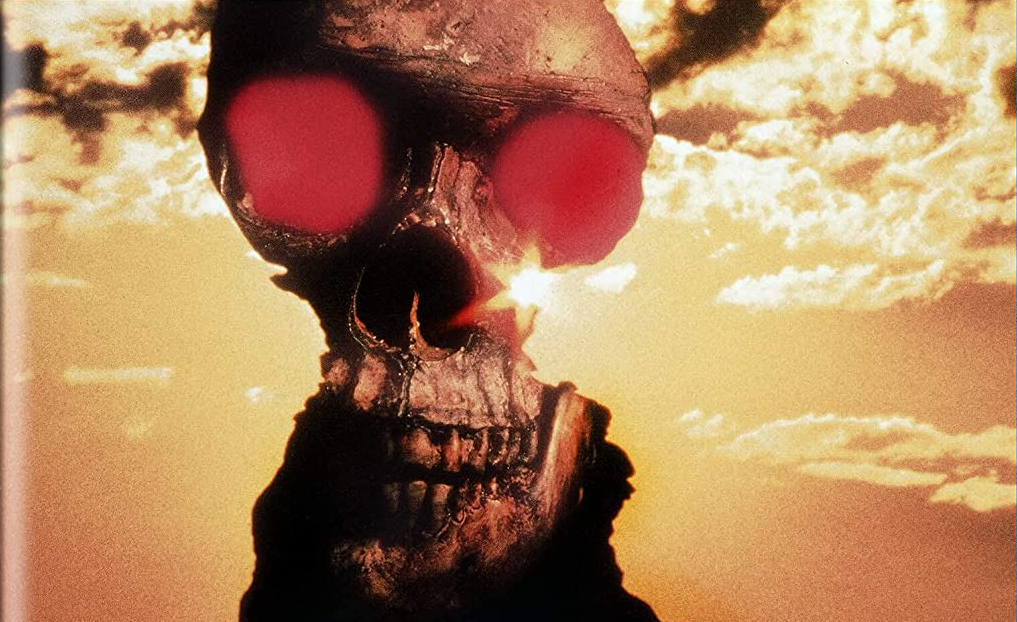 High Desert Kill is smarter – and loonier – than your average TV Movie.  Scorpion Releasing has done a great job with sound and image on this Blu-Ray release.

I did not see this one coming.

High Desert Kill is just on the right side of gonzo to make it a more adroit Genre TV Movie than one is used to.  Add in a game cast that includes Chuck Connors, Anthony Geary, Marc Singer, and Micah Grant and you have yourself a cult classic ready to be rediscovered.

A group of friends (Geary, Singer, Grant) plans for a yearly hunt have changed because their fourth has been killed in a tragic accident.  As they begin their weekend in the New Mexican frontier, they encounter a professional hunter (Connors).  Things only get weirder and more violent from there.

There are two films that this film could be compared to, but this reviewer won’t as it would literally ruin the surprise.  In fact, discussing it beyond the barest of plot setups will do this film a major injustice.  Part of the fun of this film is the genres and various troupes that the film is playing with.  The script by T.S. Cook (with a story by Mike Marvin and Darnell Fry) takes certain limitations of the budget and turns them into assets.

Focusing on the characters and their trying to solve an ever-growing stranger situation allows actors like Geary, Singer, and Connors to make the most out of situations.  A certain amount of machismo and arched performances plays throughout the piece but stay with the film as it’s a part of the story itself.  Director Henry Falk understands this enough to move out of the way and constructs the action scenes with a clever eye towards the lower budget.

High Desert Kill is a pleasant surprise with a harder cynical end that one does not expect from a TV Movie.  This one will surprise and delight those willing to venture into this specific wilderness.

Scorpion Releasing has given us two flavors for this film; one in 1.78 that fills your screen or the 1.33 Academy Ratio [Window Boxed] as originally broadcasted.

Reviewing both the best option is the OAR of 1.33.  The image isn’t zoomed in and there’s a clarity and framing that feels more organic.  I will say that the 1.78 version makes everything a bit more claustrophobic adding to the tension of the entire film.  Though the 1.78 version feels off.  That said the image on this new 2K Master is a wonderfully handsome reproduction of this Made for TV movie that’s a bit more cinematic than others at the time.

The special features are a collection of trailers including Eye of the Tiger, Trackdown, The Time Guardian, King of the Mountain, Highway to Hell, Defcon 4, Retroactive, Death Before Dishonor

High Desert Kill is a great piece of genre mashup waiting to be rediscovered.  Recommended!