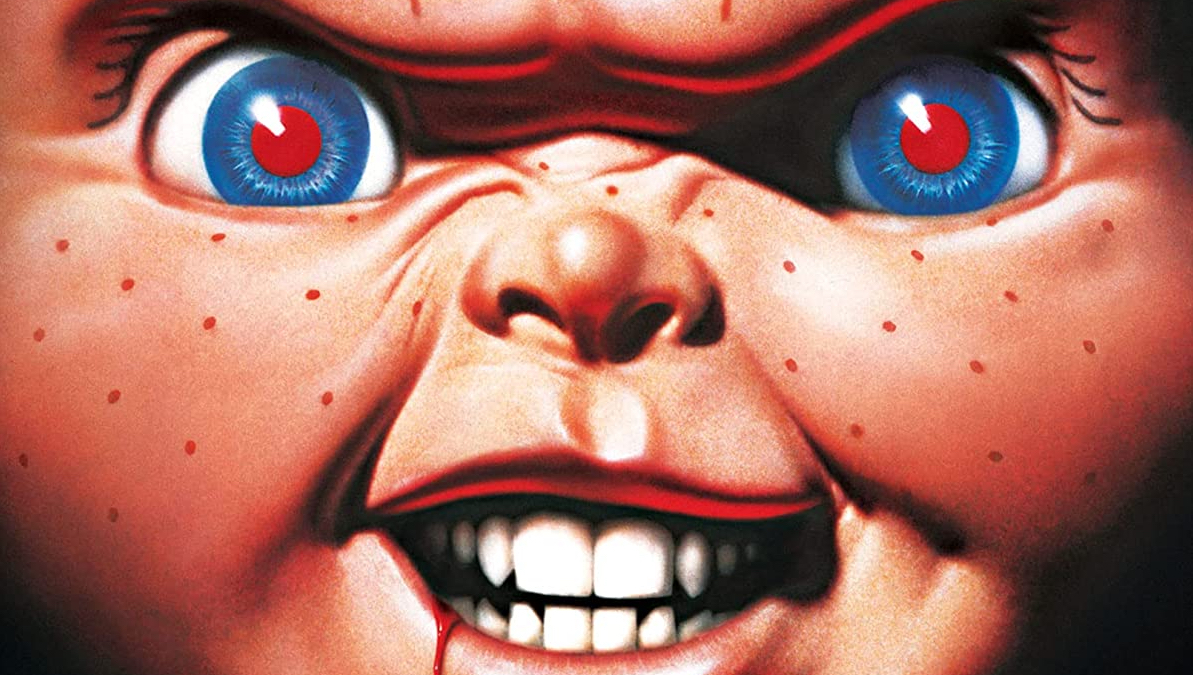 In the third film of the franchise, it feels like screenwriter Don Mancini again understands exactly what you need to give you the next sequel.  Skipping ahead eight years is a brilliant stroke that allows for a different style and tone though hueing closely to the first two’s formula.  Again, you have the Corporation that created the Good Guy Dolls trying to see if it’s viable to begin to sell them again.  There’s so much to these scenes and how much it says even now about remake and sequel culture and just corporations praying on people’s nostalgia.

The first glimpse of the CEO of Play Pals Sullivan (Peter Haskell) in front of the board room as he cares only about profits and getting the Good Guy Dolls back into production he’s gone.  It’s the perfect setup as his group of minions fill in the eight-year gap in the narrative (the film was released a year after part 2).  Soon after the meeting, Sullivan meets his end and by the end, we mean everyone’s favorite put-upon killer doll Chucky (Brad Dourif in a performance that could be described as a Spinal Tap ‘11’).

We then cut to a Military Academy where Andy (not played by Justin Whalin) has after years and years of foster care and disciplinary issues been sent.  All the clichés are there.  The stern headmaster.  The older bully.  The love interest.  The geeky roommate.  The little kid.  Though they’re done with a Chucky and Military School spin that makes this a sort of From Here to Eternity homage.  Except with Chucky in the middle of it all trying to get back to human form.

Dourif really did find his groove here playing Chucky with the right amount of humor and menace that makes him both hilarious and a genuine threat.  The script makes sure to always find inventive ways to ensure the logic works.  The garbage truck kill and the “friendly fire” war games are both inventive and honestly fun because Dourif’s Chucky is in the middle of it all cackling and enjoying himself as the bloodshed occurs.  Only funnier is the amount of bullshit that Mancini’s script puts Chucky through all for a fool’s errand.

Child’s Play 3 promises more and delivers.  It’s just too bad we had to wait another seven years before the brilliance that is Bride of Chucky would grace the silver screen.

The new – done in 2022 – 4K Scan of The Original Camera Negative – Presented In Dolby Vision, like the first two films, Child’s Play 3 is nothing short of spectacular.  Having owned several Blu-Ray iterations of the film and doing a comparison to this new scan and 4K Disc’s transfer – there isn’t any comparison.  Scream Factory’s newest scan is near-perfect image reproduction.  The image is filmic with deeper blacks and contrast levels than in previous editions.  The image is sharp but retains the grain structure not digitally scrubbed.  What we get is a beautiful verbose image that showed massive detail in the blacks and a beautiful color spectrum.

The all-new audio commentary with Director Jack Bender is hosted by Justin Beam of Shout Factory.  Bender admits having not seen his film in years.  Some of the details include how he worked with Mancini and crew to design the opening set in the factory that Child’s Play 2 ends in, alternate versions of the opening scene, how Bender became attached to the sequel, the speed of the release and production inhibited – in Bender’s estimation – the sequel’s success, the difficulties in making a third murderous doll series and trying to still “scare people”, a discussion of why they chose the sole animatronics over a combination of actor Ed Gale and the animatronics, how Bruce Valanche helped with a “punch up” job, how the location was chosen for the military school, a John Ritter Cameo that never happened, the post careers of Travis Fine and Justin Whalin, the production time on-location at the military school and the total production time frame, a great story about Mobsters that was shooting at the time and the troubles they had that this production did not, working with Don Mancini and the collaboration between them, working with Brad Dourif and the methods they used his voice to create a performance with the puppet, working with child actors like Jeremy Sylvers which leads to a larger discussion of directing children acting, a side conversion of working with Leonard Cohen, the work of production designer Richard Sawyer, the construction of the various setpieces/kills, the finale set in a carnivale and how it was built and shot, how he shoots horror and what he’s learned from that and also from others like working with Stephen King, and much more.  Bender is a great listen giving us an informative track.

The archival audio commentary with Producer Robert Latham Brown opens with his history with the first two films as UPM and moving to Producer on this third film.  Some of the details include the scenes he shot the second unit on, filming on various sets and locations, anecdotes from the production itself about various different scenes, and more.  This is a parse but mostly informative track though there is a fair amount of describing what’s on screen.

NOTE: All commentary tracks are included on both the Blu-Ray and 4K UHD discs on this set.

Ride The Frightening (13:18) – is an all-new interview with Screenwriter Don Mancini.  An extension of his interviews found on the Child’s Play and Child’s Play 2 discs.  Mancini opens with the speed at which the production moved.  Some of the details include the casting of Whalin, working with Bender, an aside that he was working on Green Hornet at the time as a writer, his feeling of the shortcomings of the project, the troubles with some of the casting, and much more.  The interview was filmed via Zoom and has all the video and audio quality therewithin that format.

War Games (5:48) – is an all-new interview with Actress Perrey Reeves where she discusses her career at that time, her casting in the film, how T2 influenced the character of Disilva, working with Jack Bender, working on the production on location, and more.

Chucky Goes East (6:34) – is an all-new interview with Executive Producer David Kirschner.  An extension of his interviews found on the Child’s Play and Child’s Play 2 discs.  Kirschner discusses the excitement during the time as a third and more from the series possibilities and where they ended up with the Franchise.  Some of the other details include hiring Jack Bender off of his work on the Dreamer of Oz, his honest thoughts on Bender’s work on the film, the casting of Justin Whalin, Kirschner’s lesser involvement in 2 and 3, and passing the “torch” to Mancini, how the ending of 3 sew – literal – the seeds for Bride of Chucky and more.  The interview was filmed via Zoom and has all the video and audio quality therewithin that format.

Carnivals And Campouts (4:21) – is an all-new interview with Producer Robert Latham Brown.   An extension of his interviews found on the Child’s Play and Child’s Play 2 discs.  Some of the details include the speed of the production moved during the production of the first sequel and how that influenced it, the discussions of how to revive Chucky, the filming of the “war games” scenes and how it was accomplished on location, and the troubles, and more.

Midway Centurions (4:15) – is an all-new interview with Actor Michael Chieffo begins with how he first met Don Mancini and became “family friends” with the writer/producer/director as he was there on the sequel because his wife – Beth Grant – was in the film.  Some of the details include the casting and working a day on the film, a funny anecdote about playing dead, and much more.  The interview was filmed via Zoom and has all the video and audio quality therewithin that format.

Shear Terror (7:36) – is an all-new interview with Makeup Artist Craig Reardon begins with how he passed on the Makeup FX work – not Chucky’s creation – for the first two films.  Some of the details include how Jack Bender helped convince him to take the job, the various items that he designed for the film, the barber shop set piece and how it was achieved, and much more.

Unholy Mountain (6:58) – is an all-new interview with Production Designer Richard Sawyer opens with how he was hired by Jack Bender and his approach to the production.  Some of the details include how they designed the sets working with the FX designers and stylistic approaches, how they build the “house of horrors” ride, and much more.

Child’s Play 3 is a cult-classic horror comedy, and Scream Factory has treated it as such with this overstuffed 4K UHD edition.  Highest Possible Recommendations!!!