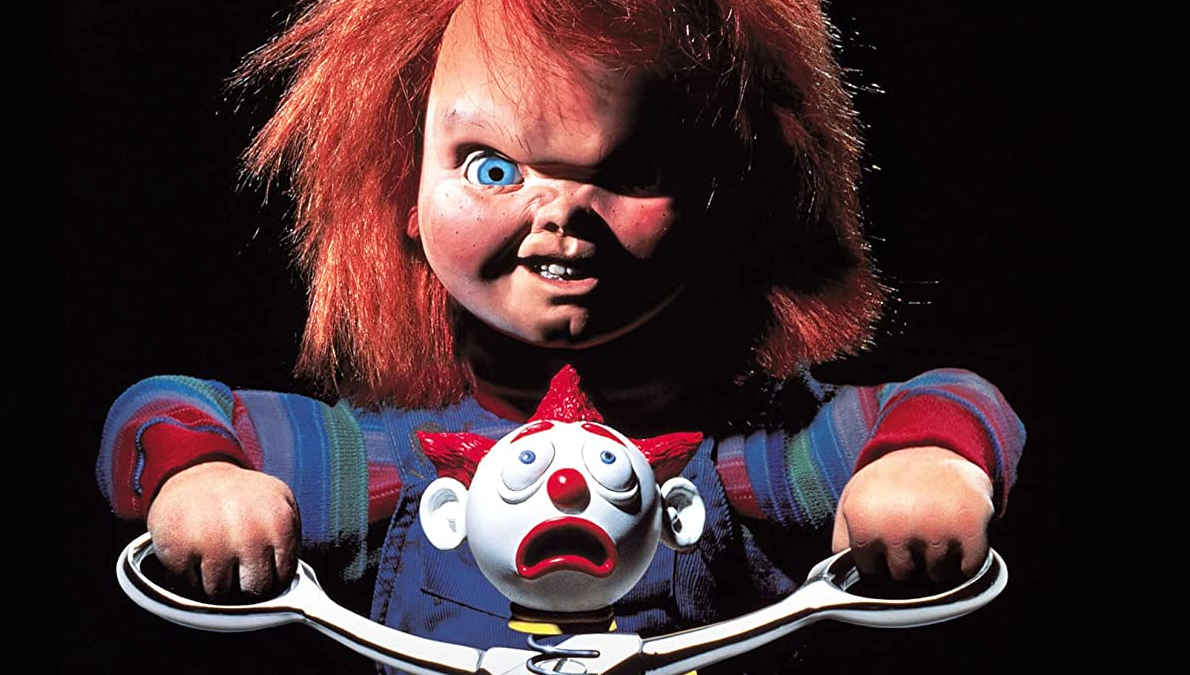 You can’t keep a Good Guy Doll Down.  Scream Factory continues to put the shiny new 4K UHD coat on the Chucky Franchise with Child’s Play 2!

Or so the tagline for the sequel, Child’s Play 2, will have you note.  It’s a good thing they mention Mr. Torrance because Mancini and Company liberally steal from the most iconic of Hedge Maze scenes for its truly fun-funny-and-entertaining bloody soaked (mostly Chuck’s) finale.

The smartest thing the franchise did was to keep Don Mancini as its screenwriter. The man who’s become the protector of Chucky in all its iterations understood the value of his Good Guy Doll and its flexibility.  The later entries in the series really are genius, the crown jewel being the one-two punch of lunacy of Bride of Chucky and Seed of Chucky.  But here with the quick turnaround Mancini just made adroit “what’s next” decisions for the sequel.

Those decisions create a great setup for Andy (Alex Vincent returning) being put in foster care with a less than understanding Foster Family (headed by horror icons Jenny Agutter and Gerrit Graham) and a plucky rebellious teen foster sister (Christine Elise pre-90120 crazy stalker role).  Framing everything that happened to Andy as a “mental break” though feels like a given is still a smart setup by Mancini and his script.

The film starts quickly as we’re treated to the CEO of the Toy Company wanting them to test everything about this Doll and the wild claim that it’s possessed.  It’s the type of hilarious – but unfortunately true – action that seemed hilarious in 1990 but sadly what Corporations would do in 2022 that keep these films still fresh. The fact that Chucky’s first kill is an executive of a major corporation is even more prescient.

In fact, Mancini’s script ensures that the people that are getting the business end of Chucky’s wrath are not the best of people.  The casting of character actors like Graham, Beth Grant, and Greg Germann ensure this until the big finale set at the Good Guy Doll Factory.  By the time the film does get to the finale, there’s a bit of comedy that plays throughout that Brad Dourif manages to create the perfect performance for.  It’s pathetic, menacing, hilarious, stupid, and … perfect.  By the time Chuck after creating a Knife Hand and says “I Hate Kids.”  If your tummy doesn’t hurt from laughter… well you’re just not the audience that Mancini and Company have designed these for.

The new – done in 2022 – 4K Scan of The Original Camera Negative – Presented In Dolby Vision, like the first film, Child’s Play 2 looks nothing short of spectacular.  Having owned several Blu-Ray iterations of the film and doing a comparison to this new scan and 4K Disc’s transfer – there isn’t any comparison.  Scream Factory’s newest scan is near-perfect image reproduction.  The image is filmic with deeper blacks and contrast levels than in previous editions.  The image is sharp but retains the grain structure not digitally scrubbed.  What we get is a beautiful verbose image that showed massive detail in the blacks and a beautiful color spectrum.

The archival Audio Commentary with Director John Lafia opens with a discussion of the opening and the music by Graeme Revell which homages the Universal Monster movie’s musical themes.  Some of the details include how the opening was storyboarded and how meticulous and time-consuming all the insert shots took to create this opening, working with Alex Vincent and being inexperienced with young actors, casting Jenny Agutter and Gerrit Graham, the approach they took with the sequel and the expectations of the audience and how they tried to subvert these expectations, how he took inspiration from Hitchcock and classic Hollywood Horror, a personal discussion of what inspired the film, how he built the film’s scares and the finale, the inspiration they took from The Shinning for the finale, the work they did to achieve the finale, and much more.  Lafia provides a laidback but informative commentary track, there is a bit of describing what’s on screen but it’s made up for by Lafia’s enthusiasm for the film and providing insight into making the sequel.

NOTE: All commentary tracks are included on both the Blu-Ray and 4K UHD discs on this set.

Puppet Master (12:57) – is an all-new interview with Screenwriter Don Mancini.  An extension of his interview on the Child’s Play disc.  Mancini discusses after the success of the first film and how he was hired by Kirschner to write the script along with director Lafia, the contributions of Lafia and the visual style, the hiring of a cinematographer, the transition to a more cinematic style rather than the more naturalistic look that Holland brought, how Return of the Living Dead inspired them, the development of the script, the construction of the various set pieces/kills and how they were achieved, and much more.  The interview was filmed via Zoom and has all the video and audio quality therewithin that format.

Under Pressure (7:37) – is an all-new interview with Actor Alex Vincent.  An extension of the actor’s interview on the Child’s Play disc.  Some of the details include the pressure that Vincent felt to deliver a good performance and a successful film, the personal toll that the success took on him as a child, the differences between working with John Lafia and Tom Holland, and the difference between the first and the second film, his personal relationship of Don Mancini and the experiences on the Universal Lot, and much more.  The interview was filmed via Zoom and has all the video and audio quality therewithin that format.

The Family Expands (7:56) – is an all-new interview with Producer David Kirschner. An extension of the producer’s interview on the Child’s Play disc.  Some of the details include how the production came together after the success of the film, the fallout after the sale of UA and how the regime change caused the film to be put in turnaround, how Spielberg influenced Child’s Play 2 to go to Universal, the hiring John Lafia as director, the troubles with the production that incurred by the bond company, the passing of Lafia, the construction of the set for the finale, and much more.  The interview was filmed via Zoom and has all the video and audio quality therewithin that format.

In Kyle We Trust (10:09) – is an all-new interview with Actress Christine Elise.  The actor discusses how she got her first big role.  Some of the other details include her thoughts on the script, by her own admission about how she pulls from her own life in the various roles that she’s played – including here, working with Don Mancini and her relationship with him, working with John Lafia, working with Vincent and “Chucky” and how that informed the difficulty of her performance, and much more.

School’s Out (5:28) – is an all-new interview with Actress Beth Grant. The legendary character actor discusses how she got the part.  Some of the details include working with Don Mancini, how she approached the role and what inspired her, the technical challenges of the Chucky fight scene, family members that are in the film, and much more.  The interview was filmed via Zoom and has all the video and audio quality therewithin that format.

The Second Dance (3:59) – is an all-new interview with Executive Producer Robert Latham Brown.  An extension of the Unit Production Manager now Producer’s interview on the Child’s Play disc.  Some of the details include his breaking down of the script, working on a complex production with the puppet work and FX heavy shoot, his thoughts on the sequel, and much more.

Theatrical Trailer (1:18) – this is the great teaser trailer that includes the iconic poster moment.

TV Spot (0:31) – the 30-second TV spot is one of those hilarious “audience reaction” ads they still occasionally do for horror films.

Child’s Play 2 like the original is a stone-cold classic, and Scream Factory has treated it as such with this overstuffed 4K UHD edition.  Highest Possible Recommendations!!!